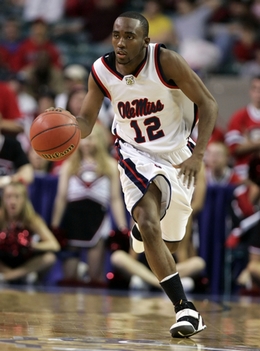 Joey Whelan
@DraftExpress
Not many freshman come into college, and from the instant they step on the court, are relied upon as their teams go-to player. Chris Warren did that this past season, leading his team in minutes, scoring, and assists, while also leading them to a very strong 13-0 start. Unfortunately the success was short lived, as Ole Miss went a disappointing 7-9 in SEC conference play, but Warren stayed hot most of the season, scoring in double digits in all but four games, and showing very good poise for a freshman floor general.

Warren stands a slight 511, 170 pounds, with a frame that doesnt look like its going to support significantly more weight in the future. A good, but not great athlete, Warren excels with quickness and change of direction ability, though he doesnt have a blazing first step or very good vertical explosiveness.

As a point guard, Warren creates in many different ways, doing a good job keeping his head up while showing very good court vision. He excels most by finding angles and passing lanes for post entry passes, showing great precision and vision on those passes, making things very easy for big man teammate Dwayne Curtis this past season. Warren also does a good job on drive-and-dishes, both on simple one-dribble penetrations for kickouts, or by weaving through the lane and making dumpoffs. One thing he also does very well is not telegraphing his passes, never making it obvious to the defense what hes planning to do. While Warren shows a lot of great abilities as a point guard, his teams offense didnt always have the greatest flow this past season, which at times fell on his shoulders. He can hold on to the ball for too long waiting for things to develop, getting the teams offense out of rhythm, though as a freshman who had to step in as a starting point guard immediately, its not something to be hugely concerned about yet.

As a ball-handler, Warren looks very good the vast majority of the time, showing a controlled dribble low to the ground, being able to handle the ball with both hands, and having a decent array of advanced moves. Since he doesnt have the greatest first step, he relies a lot on getting his defender off balance or using screens, doing a very good job of mixing in crossovers, hesitation dribbles, and doing a good job changing gears with the ball. Warrens biggest problem in the ball-handling department is he gets a little sloppy with the ball at times when reacting to pressure defense, letting the ball get away from him or making foolish errors that seem partly a result of getting flustered. It appears this may partly be a mental issue, and is something that should likely improve with time.

As a scorer, Warren is clearly at his best as a shooter, with a very high 58% of his shots coming from behind the arc this season, where he shot a strong 39%. His spot-up shot is very close to textbook form, possessing excellent extension and follow-through, with a high, quick, and consistent release. His foot placement varies from his right foot being barely in front of his left to his right foot being so far ahead that his bodys at a near 45* angle, but this doesnt seem to affect his shot much at all. He isnt affected when he has a hand in his face either, showing good poise and rarely altering his shot due to that. As a pull-up shooter, Warren is very good coming out of static and near-static positions, but his form falls off terribly when hes shooting on the move, with him showing bad tendencies to fade away, get off balance, not get his legs underneath him, and not hold his follow through. The results also fall off significantly in these situations.

Attacking the basket, Warren shows nice ability to adjust in mid-air, being able to switch hands with the ball, contort his body to avoid contact, and use good creativity at the rim. Unfortunately, this usually isnt enough to get it done in the half-court, where Warren just lacks the size and strength to consistently get it done at the basket. He shows flashes of a right-handed floater that has decent effectiveness, but he really needs to improve it to become a more consistent threat in the lane.

On the defensive end, Warren shows a pretty good stance on the ball and has good lateral quickness, even showing the ability to recover laterally or play tough defense from his mans side when he loses position, but he can get overpowered or shot over against larger opponents, which is a concern. Where Warren really struggles on defense, though, is getting around screens, often going under and not fighting hard when he goes over, which has a lot to do with his slight build and should be a long-term concern.

Warren will probably get more attention as a sophomore, and with teammate Dwayne Curtis departing, will be relied upon even more as a scorer. This could be a problem if he doesnt develop a more consistent scoring game in the lane or cut down on the on-the-move jumpers, as his field-goal percentage was already below 40% this year, with his TS% only coming in at 54%. Its tough to peg Warrens NBA potential at this stage, as he certainly will need some more time in college, but he definitely appears to have the skills and mentality to have a good chance at making a roster or getting drafted down the road, even despite his size, which will always be working against him.
Read full article