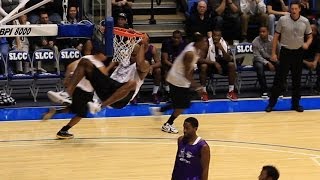 Matt Williams
@DraftExpress
Overview: An athletic swingman who can put the ball in the basket with the best of them. Has prototypical size for a shooting guard. Possesses great strength for his position. A top-notch run and jump athlete. Misses games with injuries each season. Shoots the ball pretty well from the outside. Can beat his man off the dribble. An excellent slasher. Finishes at the rim with authority. Gets to the line at a superb rate, amongst the best in the league. Somewhat turnover prone. Makes some plays on defense, but is too aggressive at times. Contributes on the glass. Only needed one season at Duke to ready himself for the League. Can put up big numbers when the offense is geared towards him. Can still be effective as a complimentary player.

Offense: Gets his offense in a wide variety of ways. Uses his athleticism well in one-on-one situations and fast breaks, his jump shot and footwork spotting up and running off of screens, and his strength when posting up and grabbing offensive rebounds. Does more damage with his athleticism than his skills offensively, but is fairly efficient considering the rate he scores at. Finishes at the rim extremely well due to his explosive leaping ability and strong build. Loves to get out and run in transition. Capable of using his dribble to get to the rim as well. Tends to drive right where he can either pull up or go to the rim. Will attack the rim when he drives left. Not a great shooter off the dribble, but still capable. Will fade away for no reason when he pulls ups at times. Good catch and shoot guy. Doesnt shoot with a lot elevation, but has good touch and form. Has improved his 3-point shooting throughout the years, but still doesnt rely very heavily on this part of his game. Will knock down turnaround jumpers in the post, or bully smaller guards. Solid ball handler and passer who gets a little too aggressive with both at times. Very athletic and skilled player who expends most of his energy on the offensive end.

Defense: A average defensive player who has the athleticism to be a whole lot more. Has the athleticism and strength to defend almost any perimeter player. Displays great lateral quickness. Doesnt always get in a good defensive stance or close out hard. Contests shots, but appears a bit disinterested defensively. Will make an effort when he knows he has to. Good rebounder for his position. Commits quite a few fouls for a guard.
Read full article