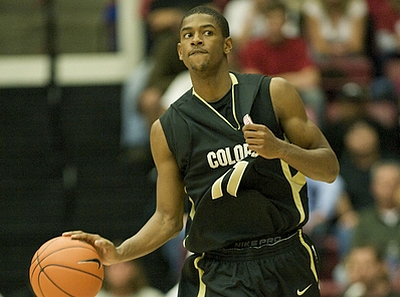 Generally it's a difficult task to get noticed as a basketball player at the University of Colorado, especially coming off a season where the Buffalos went 1-15 in the Big 12 and won just nine games overall. Despite the teams floundering play, rising junior Cory Higgins emerged as one of the bright young stars in the conference after a breakout sophomore season. Logging a tremendous number of minutes for the second consecutive year, the lightly recruited shooting guard more than doubled his offensive production to 17.4 points, while also increasing his numbers in every other statistical category as well.

Heading into his third year in Boulder now, Higgins will have more eyes on him both from opposing defenses and from pro scouts, looking to see if the junior can continue to increase his production on the floor  something he will be expected to do with an offense geared towards his strengths.

When examining the two-guards physical makeup there is plenty that will make him successful as a collegiate player, but certainly a good amount is left to be desired from an NBA standpoint. Standing around 6-5 or less, Higgins is a tad undersized for his position and he doesn't make up for it with any incredible athleticism. He has pretty good quickness, but isn't going to be blowing by defenders if he makes it to the next level. The biggest thing holding Higgins back from really emerging as a dominant offensive threat is his complete lack of ability to elevate in really any situation. His perimeter shots are flat, he can't jump well when pulling up off the dribble and he doesn't leap very well around the basket when attacking either, resulting in him being forced into a bevy of difficult shot attempts.

Higgins' game is built largely around Buffalo getting him the ball in isolation situations  something that happens on nearly 25 percent of his touches according to our data. It's a safe bet that when he does touch the ball he is putting it on the floor and using his craftiness to get himself a look at the basket. Higgins has strong ball-handling skills and the type of body control and scoring instincts that allow him to create opportunities for himself even when matched against defenders who are quick than him. As a sophomore he shot a very respectable 47.6 percent from the floor thanks in large part to his mid-range pull up jumper, the bread and butter of his arsenal. Even though he doesn't get a tremendous amount of lift under these shots, Higgins can pull up on a dime which allows him to create the necessary space to pull the trigger, and he does show a pretty smooth stroke here.

The rest of Higgins' offensive game is still very much a crap shoot dependent on the team he is facing on a particular night and how he is playing. He connected on a modest 36 percent of his three-point attempts, but he didn't put up that many, less than three per game. He doesn't elevate at all on these shots, often leaving his shot very flat and thus less likely to drop. His mechanics are good, but he absolutely has to learn to create better separation from his defender if he's to get his shot off against longer, more athletic players. When attacking the basket he has the same problem. Getting past defenders and into the lane isn't the problem, but finishing amongst the trees is. Higgins is often forced to attempt over the top acrobatic shots attempts around the cylinder  a fair number of which go in  but obviously these aren't always well advised looks. One positive in his driving game is the control that he shows though, knowing how to finish in transition when flying at the rim at full speed. His excellent knack for scoring also shows up in the way he gets to the free throw line, nearly seven times per game last year.

Like his offensive game, Higgins is a mixed bag when it comes to defense. He has decent quickness, allowing him to be a solid on ball defender, but he doesn't possess great size, length or explosiveness to contest shots. Where he struggles right now is in his focus, on many occasion getting turned around or losing his defender, only to be left lunging at a perimeter shooter at the last possible second. Higgins did manage to average nearly two steals per game last season as a result of his quick hands and solid anticipation, often intercepting passes and taking them the other way for easy lay ins. Again, he does gamble a little too often here which leaves him in a vulnerable position.

It is still a little too early to make a definite read on where Higgins will wind up when his college career comes to an end. Certainly there are some shortcomings which are easy to spot, mainly his size, athleticism and the fact that he has an entire offense geared around getting him shots, which obviously won't be the case in the NBA. With that said, he is a smooth operator with the basketball and averaging better than 17 ppg as a sophomore in the Big 12 is something that has to be looked at. This year will go a long way to telling us how Higgins stacks up as a potential pro prospect in the future.
Read full article