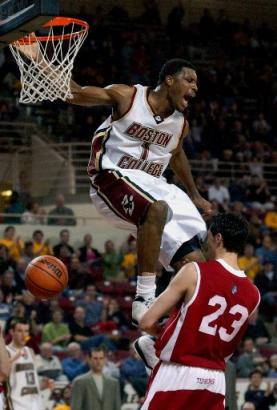 Matt Williams
@DraftExpress
Overview: An undersized bruiser who has proven to be a capable role-player already. Stands only 6-5 1/2 without shoes with a solid 6-9 1/2 wingspan. Not terribly fast or agile, but will surprise with his speed once he gets a head of steam. Compensates with outstanding physical strength. Came into the NBA carrying around quite a lot of additional weight, but has packed on muscle to the point that his physique is very impressive. Throws his weight around in the paint on both ends. Very productive, efficient offensive player on a per-minute basis. Was every bit the bruiser he is now during his high school and college days. Was one of the best players in the Big East as soon as he stepped on the floor for Boston College. Built on a dominant freshman season with three comparably impressive campaigns that saw his numbers waver around roughly the same marks across the board. Wasnt drafted in the first round due to his size and the perception that he may have peaked early and reached his potential. Also suffered a hand injury during the pre-draft process that hampered him from changing his fate in private workouts. Stepped into an ideal situation with the rebuilding Timberwolves and played significant minutes immediately. Transformed his body to compensate for his size and handle the rigors of interior play on the NBA level. A steal considering where he was drafted and how much he has contributed early on. Not a high potential player, but a solid third big man.

Offense: More diverse offensively than one would expect a bruiser of his size, and extremely efficient. Doesnt get an especially large amount of his offense from any one particular area. Capable of scoring off of cuts, spot-ups, isolations, pick and rolls, post-ups, and offensive rebounds alike. Especially effective around the rim, but not incapable from the perimeter either. Capable of scoring off of a number of moves in the post. Likes to face-up on the left block. Gives a hard jab when he swings through to the right and aggressively tries to beat his man to the middle of the floor. Likes to lean in a bit on his drives, especially against good shot blockers, to push them out of position. A bit more diverse on the right side, showing the ability to beat his man to the basket with drop steps, some deceptive counter moves, and the ability to finish plays with both hands. Prefers to go up with his right, showing excellent touch from the short range, often getting the roll on some ambitious shots in close. Uses his low center of gravity to punish his defender and give himself adequate space to get his shot off. Extremely comfortable scoring when hes defended, though some players are able to keep him far enough away from the rim that he cant get a good shot up. Very capable finisher despite his average athleticism, due to his strength and touch. Not a very good offensive rebounder, lack of leaping ability and length hurts his productivity in that regard. Physical aggressiveness helps him get to the line at a great rate. Surprisingly good ball handler for his size. Shows enough quickness to get an adequate angle to the rim to effectively use his strength to bowl his defender out of the way. Not a great shooter when he opts to get open shots from the outside, showing a flat release that yields average results. Not a total liability though. Could stand to improve his free throw percentages, as well as his decision-making as a passer. Efficient in many situations, making him attractive off the bench in most systems.

Defense: Capable defender who does some things well, but lacks the sheer physical profile to be as solid as his defensive ability would allow. Shows solid fundamentals defending the ball down low, and will surprise players on the perimeter with his lateral quickness. Gets in a good stance and does his best to stay in front, but is a bit too heavy capably defend some of the more perimeter oriented bigs in the NBA today. A little too aggressive when he closes out smaller players, often struggling in mismatches. Struggles against forwards that have the ball handling ability to change directions after a hard initial move. Has no trouble holding position down low, though his lack of size hurts his ability to get in the passing lanes and contest shots. Physique makes him more suitable to defend centers, but his height negates that. Poor rebounder, well below average from a productivity standpoint for his position. A bit foul prone, showing a tendency to reach when his man makes a quick crossover when hes backpedaling. Gets points for effort, but doesnt have the tools to be a good defensive asset.
Read full article

Matt Williams
@DraftExpress
The Craig Smith that showed up at the Summer League looks like a completely different player than the Craig Smith that came out of Boston College. Smiths weight isnt that different, but his body composition is. He has converted almost all of his excess weight into muscle, and was one of the most impressive physical specimens of the entire Summer League. While Minnesota featured a number of other young talents like Rashad McCants and Randy Foye, it was the 2nd round pick Smith who was the focal point of the teams offense.

One of the most impressive things about Smiths new physique is how well he creates space down low with his footwork. Once Smith gets the ball with a man on his back, he can pivot quickly enough to seal his man for easy layups. Once Smith has a step on his man, he is simply too big and strong for his man to regain position. This often gets him to the line or draws help defenders. Smith found himself getting double-teamed pretty frequently in Vegas, and while he didnt always make the best passes, he began making better reads and sending the ball to open teammates on the perimeter more frequently as time went on.

Smith showed a handful of nice post moves this week, including a nifty spinning hook over his left shoulder. Though Smith doesnt use many finesse moves around the basket, he possesses nice touch. Even when he was at Boston College, Smith had an advanced back to the basket game, and he has truly embraced this aspect of his game. He ran the floor hard in Vegas, and always went straight to the block to find contact and create passing lanes for his guards. Smiths ability to get and maintain position serves him well on the offensive glass too, as he is able to eat up space and anticipate bounces.

What Smith lacks in speed defensively, he makes up for with strength and explosiveness. Though Smith doesnt jump out of the gym, he is a steady shot blocker due to his anticipation and football-player-like athleticism. He wont have an easy time defending quicker and taller players, and could still use to shed a little bit more weight to optimize his physical conditioning.

Smith looked extremely impressive this week, and would be a great compliment to Kevin Garnett should Minnesota decide to play the two together. Mark Blount is a nice option, but Smith can handle contact down low substantially better. If Smith can further improve his conditioning, he could surprise a lot of people this season with his production.
Read full article