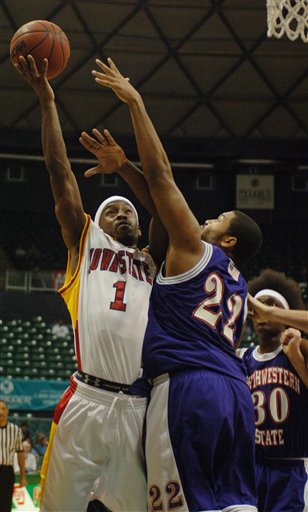 Eric Weiss
@DraftExpress
Stinson started strongly with solid defensive pressure on Allen Ray. Offensively, Stinson showed some decent point guard skills, keeping his head up and finding the open man as well as splitting the double team on one occasion. Stinson didnt show much in the second half, he deferred to McNamara on a lot of possessions and mostly played off-ball where there were limited opportunities for him to do much.
Read full article

With Iowa State clearly needing a win over a surging Colorado team to help their faltering NCAA tournament resume, their flamboyant lead guard stepped up to the plate. Iowa State had lost 4 of their 6 past games in the Big 12 conference, including three straight at home in Ames (usually known as a fortress) and was in danger of losing sight of the top part of the conference rankings if they could not get their act together quick. The Cyclones jumped out on Colorado early in the 1st half and led the game by 20 points or more for much of the 2nd half before Colorado made a futile surge late in the game. This was the 1st triple-double in 6 years by an Iowa State player, and only the third in team history, with Jamal Tinsley being the last to accomplish that feat in February of 2000.

Stinson put on a basketball clinic on Superbowl Sunday for the extremely loud and enthusiastic Cyclone crowd in Ames. He showed a very complete all-around game; whether it was getting into the paint and scoring using his flashy ball-handling skills and creative finishes, locking down his man on the perimeter even if he was asked to guard a much bigger player in Richard Roby (who was awful by the way) at times, but most importantly doing a great job distributing the ball, controlling the tempo and finding the open man, much to the delight of his teammates and fans. Almost every single one of his 10 assists were highlight reel caliber; including behind the back passes, no-look dishes, bullet passes into the paint for easy layups or the old and very reliable drive and kick after the defense collapsed around him. He wasnt particularly prolific from behind the 3-point line today, only hitting one of his 3 shots, but he also didnt rely on this part of his game the way he has had the tendency to do at times in his career, usually with less-than-stellar results.

From watching his progression from last year to this, its clear that Stinson is a better player right now and is still improving on his all-around skill set. His assists totals have risen nicely by 20% while his turnovers are up only slightly. We need to keep in mind that he isnt even Iowa States primary ball-handler, playing next to a more pure playmaker in equally talented Will Blalock. Hes scoring nearly 20 points a game this season, but most importantly is doing so it in a much more efficient manner, shooting nearly 47% from the field, improving his 3-point percentages by over 7 points to a now more respectable 34%, and still getting to the line nearly 5 times per game.

Hell never be a pure point guard in the mold of Steve Nash or Deron Williams, but the NBA has shown us time after time that they are willing to live with scoring lead guards as long as they are capable of running a team in satisfactory fashion. Stinson projects as more of a backup guard anyway, and his skill set is definitely suitable for what NBA teams will need him to do at the end and beginning of quarters while giving the starting point a rest. Hes a two-way guard who puts pride in the way he plays on both ends of the floor. And while he might have a little too much Rucker League in his game still as the epitome of your flashy New York City point, there are coaches who are willing to live with that because of the energy he brings to the floor.

Theres a lot to like about his toughness and the fearless manner in which he plays the game. He has good size at 6-3, but also possesses excellent strength and length to boot, being able to bench press 315 pounds according to Iowa States media guide. His ball-handling skills are outstanding as you would probably expect, being able to change pace nicely off the bounce and create space for himself, use hesitation moves and all the other nifty tricks that he picked up on the playgrounds of New York. He finishes creatively around the basket with Van Exel type floaters and is not afraid to stick his nose in to harass his man defensively or come up with an offensive rebound.

How much love he gets in the draft (whether its this year or next) largely depends on how much upside NBA teams think he still has to improve. Despite being a junior he turns 23 in a little over a week, possibly suffering a bit from the Carl Krauser disease that NBA teams tend to shy away from in the 1st round. And while he was absolutely terrific this weekend blowing out Colorado, he is still a fairly inconsistent player that is capable of killing his team at times with his poor shot selection and tendency to over-dribble and turn the ball over. He lacks range on his shot, but dont ever tell him that when his team is losing, because he just wont listen. His percentages drop significantly when his team is on the losing end of the scoreboard, further proving the notion that he is not the type of guy you want to build an NBA team around, but rather compliment you in small spurts. This is a big reason why Iowa State is such an unpredictable team, capable of beating the best in the country on any given night but also lose to some of the worst. Thats exactly why the way Stinson plays in March could go a long ways in determining his draft stock.
Read full article