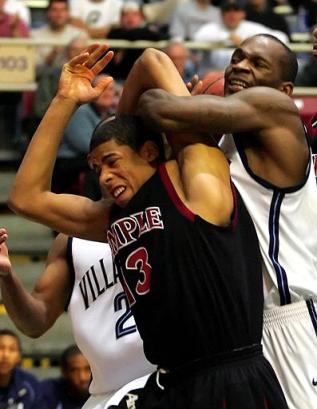 Jonathan Watters
@DraftExpress
Possibly the biggest disappointment at the entire camp so far, there is no other way to describe Curtis Sumpters performance here as anything but an complete disaster. Sumpter has looked out of place and out of sorts in almost everything hes done, forcing the issue badly with his penetrations and being stone-walled by the defenders and referees every time he s tried to do something positive to help his team out. The transition to the small forward position looks very far for this 6-7 fifth year senior right now
Read full article

Jonathan Watters
@DraftExpress
For just about every rule, one can find an exception hiding somewhere.

When it comes to basketball players and consecutive ACL surgeries, the rule is that players dont just bounce back overnight. It isnt that a player cant come back, but that a full recovery from this injury takes time. A re-injury usually indicates a more serious problem. A player almost never comes back a year later with improved athleticism and in better basketball condition.

The preseason reports of a fully mended and improved Curtis Sumpter came in, and were promptly and justifiably ignored by the DraftExpress staff. Weve heard this one before. Sumpter wasnt an elite prospect to begin with, very much in the middle of a position switch when the injury mishaps began.

But Curtis Sumpter is recovered, and he is better than ever. The 5th year senior looks more like a true SF every time out, showing off dramatically improved first-step explosiveness and a polished jumper out to the college 3-point line. Sumpter is still limited as a ballhandler and shot creator, but has clearly worked to develop a midrange game that now includes a few wrinkles. He can pull up off the bounce when he has space, and still manages to utilize that slithery toughness to get to the rim at opportune moments.

Sumpter still doesnt entirely look the part of NBA SF just yet, but the remarkable development he has made since tearing his ACL in the 2005 NCAA Tournament and then re-injuring the knee last fall is simply undeniable. He has the size, length, and mentality to be a bothersome wing defender in the NBA, and if that perimeter stroke continues to sizzle for him, a first round call isnt out of the question come draft night.
Read full article