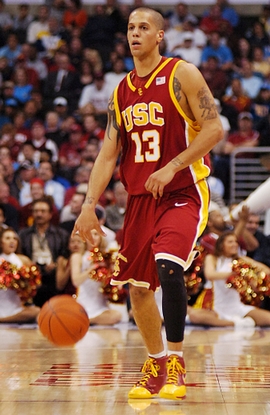 Jonathan Givony
@DraftExpress
Hackett was somewhat up and down throughout the week, showing his nice potential as a defender and big combo guard, but also struggling with his shot-selection and decision making at times. Hackett was an aggressive driver as usual, showing nice footwork and a powerful first step on the pick and roll, but he didnt always seem to be on the same page with his teammates, turning the ball over a little more than youd hope. Itll take him some time to learn the European game most likely, and this camp probably didnt do a great deal for his draft stock considering how well known his strengths and weaknesses as a college player already were. He has a multi-year deal in place with Benetton Treviso, but has an NBA opt out in his contract he can exercise should he get drafted and offered a deal.
Read full article

Joey Whelan
@DraftExpress
After a sophomore campaign in which he showed impressive flashes of ability, including recording a triple-double on the road at South Carolina, Daniel Hackett will be expected to step up his play this season. O.J. Mayo and Davon Jefferson are gone, so in addition to running the offense, he will have to become a much more consistent scorer. A stress fracture he suffered in his lower back in February should be completely healed by this point, but may be something to keep an eye on in the early going.

At 65 and hovering around 200 pounds, Hackett has nice size for an NBA combo guard, although hes not quite as athletic as you might hope. He played quite a bit of shooting guard last season, but with O.J. Mayo having moved on to the NBA, and Angelo Johnson deciding to transfer, expect to see him playing the point position much more this year. The extra time running the offense will only help Hacketts chances of reaching the next level, as he already appears to have good instincts for making others better and certainly brings an unselfish approach to the game. Athletically speaking, Hackett is solid for the college level, showing good strength and the ability to get to the rim, but his quickness and leaping ability dont scream draft pick. Its pretty clear that hell have to make his case in other areas, mainly through production, versatility, showing great intangibles, and winning.

While not what you would call a scorer, Hacketts offensive game revolves heavily around his ability to get into the lane and finish around the rim. He is strong and crafty enough to take most defenders to the basket, but he lacks a great first step or great explosiveness getting up around the rim. So much of his game is centered on getting inside position on his defender and then either trying to use his body to shield the ball on a shot attempt inside, or give a quick ball fake to draw contact. While this works a fair amount of the time, it also leads to some poor shot selection. Hackett does show solid body control, often able to adjust in the air based on what the defense gives him, and still get a good look at the basket. Where he has shown some promise is with his mid-range game off the dribble. Able to stop on a dime, Hackett can often shake defenders in this manner to set himself up for open looks. He has a tendency to make things harder for himself though, many times choosing to hop back and shoot, rather than simply pulling up for a jumper.

When he played off the ball last season Hackett tended to spot up on the perimeter, where he was a respectable 37.7% shooter from beyond the arc, but on a very limited number of attempts. The lefty shows pretty good form, but his release point is extremely inconsistent; there is a tremendous difference in his stroke when comparing open and contested shot attempts. When left open he can do some damage (3-5 against Oregon), but at just over two 3-point attempts per game last season, he isnt one to pull the trigger unless he gets open looks, and even then it isnt a guarantee hell shoot.

The transition game is where Hackett proves to be somewhat perplexing. While he struggles with any kind of dribble moves in the half court offense, once he gets out into the open floor, he becomes a much more effective slasher. He shows a good ability to change speeds and direction, while incorporating a pretty good looking spin move from time to time. With that said though, his decision making skills need to show improvement this season.

Hackett exhibits good vision in the half court offense, particularly when distributing off of screens, but when he is running the break he tends to throw caution to the wind. A large percentage of his turnovers last season came when he tried to force the issue with risky cross court passes in transition, many times throwing the ball away or having it intercepted by a defender. In addition, Hackett on plenty of occasions would pull up for a long shot attempt rather than looking for a better option. With more time running the show this season though these are things he should start to pick up on and fix in his game.

As a defender Hackett has proven to have some issues. USC ran a fair amount of zone last season and Hackett often looked lost in the rotations. Many times teammates would be forced to cover shooters in his zone because he had gotten caught up following another opponent. As an on the ball defender he proves to be pesky with quick hands, often poking balls away, but his lateral quickness is suspect. From what weve seen a quick jab and go is usually enough to shake him. Hackett has shown good anticipation skills, garnering just over a steal per game, often by jumping passing lanes.

At this point, Hackett is still very much an intriguing enigma. Prior to injuring his back last season he reached double figure scoring in 8 of 18 games, so its quite possible that we were not able to see the best of him just yet. We should also recall that he came into college a year earlier than his class, after choosing to graduate early.

His scoring numbers are likely to increase this season, though spending more time at the point and with the arrival of blue chip prospect Demar Derozan, will likely keep his point production from being very high. The biggest thing to watch will be if he can improve on his 1.49 assist to turnover ratio. He has the build and the developing court sense that leads us to believe he will at least be in the draft picture after his senior season, but Hackett must further develop his skill set as a point guard to improve his chances of reaching the next level. If things don't work out, he always has his very valuable Italian passport to fall back on.
Read full article

Jonathan Givony
@DraftExpress
Adding intrigue to what was already a very informative day of action was the appearance of USC freshman combo guard Daniel Hackett with the Under-20 Italian National Team. Hackett started at the point guard position for the Italians, and despite looking very much out of shape did a decent job for them, particularly in the first 25 minutes, which the Italians led the entire way. He got to the rim on numerous opportunities thanks to his toughness and above average athleticism, but could not find a way to finishlacking a reliable floater once inside the paint. He shot the ball OK as well, even pulling up off the dribble to drain a deep 3-pointer as the buzzer expired in the first quarter. He was a bit out of control at times, but still showed a nice feel for the game, playing pretty good defense and doing a solid job of creating for himself and others. Its going to be very good for him this summer to get plenty of playing time and high level experience with the U-20 Italian team, and from what we could tell hes going to play a pretty big role for him, which will help USC out tremendously as they try to recover from the loss of guards Gabe Pruitt and Nick Young, with the help of the incoming O.J. Mayo.
Read full article