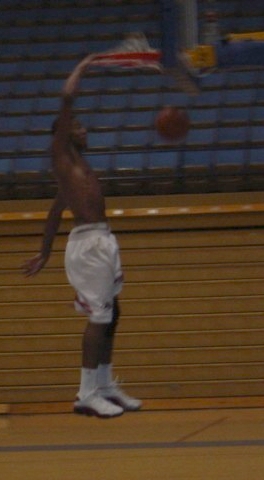 Matt Williams
@DraftExpress
Overview: A good second option at either forward spot who has been one of Indianas best players since he was drafted. Has great size for the perimeter. Shows good strength and explosiveness as well. Very versatile. Can play a little bit of power forward. Does it all on the floor. Can shoot from the outside, or use his size and touch in close. Cleans the glass on both ends. Shows good versatility and effort on the defensive end. Was an impact player as a junior and senior at New Mexico after spending the beginning of his collegiate career at Bradley. Decision to remain in school for his senior year may have helped him translate his game to the NBA as seamlessly as he did. Plays smart, which makes him a valuable asset to any team. Very high character player with an outstanding work ethic.

Offense: Gets one third of his offense in spot up opportunities where he can make a play. Gets a significant number of touches in transition as well. Very consistent shooting stroke. Capable of hitting off balance shots with a hand in his face. Shoots a very good percentage from three point range. Good shooter off the dribble as well. Prefers to get to the rim though. Handles the ball reasonably well for a player his size. Solid passer as well. Will makes some bad passes sometimes. Hard to stop in one-on-one situations. Good offensive rebounder. Gets to the line at a very high rate and shoots an impressive percentage. Needs to work on finishing at the rim with contact since he draws so much of it. Very versatile and talented player.

Defense: A solid defender who can defend both forward spots rather effectively. Has the quickness to step out and defend most small forwards on the perimeter, but has trouble against players with elite foot speed. Can also mix it up underneath and hold his own against stronger players on the block. Shows good lateral footwork. Contests shots when he can. Does a good job of always getting a hand up. Will block some shots because of that. Scrappy when he can get a hand on the ball. Commits some unnecessary fouls when he has to defend the post, but since he isnt always asked to do that it isnt a problem. Rebounds at a good rate, and elevates to meet the ball in the air rather than staying on the floor and waiting for it to come to him.
Read full article

Strengths
Granger has a prototypical body for an NBA small forward. He has good size and strength at 6-8, 225 pounds, a solid wingspan and very solid athletic ability. He is smart and smooth, but very physical, and has fantastic footwork to go along with an excellent (and very quick) vertical leap.

What makes Granger an especially intriguing player for playoff teams who are picking in the 2nd half of the 1st round (15-30) is the fact that he is so versatile. He can score from anywhere on the floor, create his own shot, defend, rebound, block shots, come up with steals, and pass very well.

Granger is a team player, he's extremely competitive and unselfish and only cares about one thing, and that's winning games. He had numerous opportunities to pad his stats and show off for the many NBA scouts who have made the trip to Albuquerque this year, but has shown absolutely no interest in doing so. He has a good court demeanor and plays the game calm, but very confident. In terms of character everyone agrees that Granger is the type of player and person an NBA team can feel comfortable investing money in. He's very smart on and off the court. Granger does not take many bad shots, which is especially impressive if you consider that his team usually needs him to score in bundles to win. Most star players who play for smaller schools don't shoot a great percentage from the field, but Granger is sitting at a very solid 53% on the year.

He is a very good passer with nice court vision and a knack for putting the ball exactly where his teammates like it, especially when it comes to feeding the post. He prefers to make the simple pass, but can also throw up good lob passes for the alleyoop dunk. At times he can be a little too unselfish even, making the extra pass when his team would clearly benefit from him trying to use his skills to take over the game. This is a borderline strength/weakness on the NBA level, though, especially considering what his role on the floor will be.

Defensively, his team plays a lot of zone, but he shows excellent potential in this area in the rare opportunity he gets to guard the other team's star player. New Mexico wisely saves his energy for the offensive end where they need him more, and therefore can not afford to get in foul trouble either. When he does get to play the type of tough man to man defense he seems to enjoy, though, he really shines. His combination of strength, length, athletic ability, intensity, determination and excellent footwork give him the potential to be a very good defender on the NBA level once he is fully unleashed. These same skills along with his good hands and the ability to elevate quickly off the floor also make him a very good rebounder as well, pulling down nine rebounds or more 17 times so far this season. He is also a terrific shotblocker on the college level thanks to his wingspan and excellent leaping ability, but also has very nice timing to really intimidate and alter shots at the rim. He rotates well and possesses a solid understanding of where to place himself in a zone defense, while also showing good leadership skills in directing his teammates on this side of the floor. He anticipates well and knows how to get in the passing lanes, coming up with many steals and igniting the fast break.

Offensively, he has a wide variety of skills he can use to score, although none of them can be considered too polished right now. He likes to use his strength and footwork to back his man down towards the basket, finishing in a variety of ways (spin moves, around the hoop thanks to his wingspan. He can put the ball on the floor and take the ball strong to the basket, finishing with contact if necessary. His range has improved dramatically over the years, a testament to his work ethic, going from hitting 9 threes in his first two seasons at a 24% clip to shooting 44% from behind the arc on over three attempts per game. He has very good mechanics and a high release on his jump shot. He is also pretty solid from the line at 74% and possesses a decent mid-range game.

Weaknesses
Unlike other wings in this draft, Granger doesn't have a crazy amount of star potential. His ceiling isn't of an allstar, but his worst case (or his floor) is better than most of the other guys competing with him like Joey Graham, Antoine Wright, and Vlad Veremeenko. Its fairly clear what Granger will give you, and that's everything you want out of your super solid role-player. He appeared to lack a killer instinct at times this year, preferring to be a role player and not taking games over when his team needed him to step up and take the team on his back. He's unselfish to a fault at times, but I'm not sure how much of a weakness this is. He's not the most intense player in this draft, but there is no doubt that he works very hard.

Most of Granger's weaknesses stem from the fact that he was played in the post for most of his collegiate career. His main one is his ball-handling, which will need serious work for him to become a shot-creating threat in the NBA. His left hand is particularly weak, as most everything of what he does off the dribble tends to be with his right. This hurts his slashing ability, as his first step isn't lightning quick as it is.

Granger's perimeter shooting has always been a big concern, but he has worked extremely hard to improve his range and become more consistent in this area. He didn't take a large amount of 3 pointers this year (averaging about 1.5 makes per game) so he will likely have to show that his jump shot is solid in workouts, especially when it comes to shooting off the dribble.

Played on a somewhat weak team in a top heavy conference that was considered down this year besides the two top teams at the top (Utah and New Mexico). His team played almost strictly zone, so it was a bit difficult to evaluate his man to man defense. This is again something he'll likely have to show in private workouts, especially his footwork and perimeter defense.


Competition
Played in the Mountain West conference, a top heavy, but strong mid-major conference and helped his team get to the NCAA tournament by knocking off Utah in the finals of the MWC tournament. His team lost to Villanova after looking to be on the verge of being blown out after no one except him showed up for the first half, but made a strong comeback to make things interesting at the end of the game. He finished with 15 points (5-16 FG, 1-5 3P) to go along with 12 rebounds, 1 block and 1 steal while playing all 40 minutes for his team.

Outlook
Granger is a senior and therefore automatically eligible. His draft stock has risen consistently through the year to the point that he is considered a lock by most to be drafted in the first round and could potentially get drafted as high as the late lottery depending on who declares and how he fares in workouts. He's represented by Chicago based agent Mark Bartelstein.

Facts
An honorable mention on the AP All-America team.