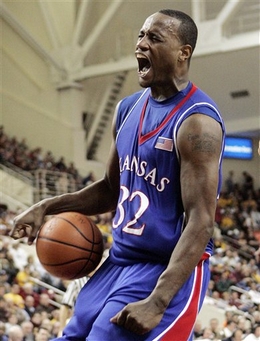 Joseph Treutlein
@DraftExpress
There are few players more statistically improved this season than Kansas senior big man, Darnell Jackson. The fact that he has become a key role player for one of the premier programs in the country has surely made scouts and opposing teams take note.

On offense, Jackson has established himself as one of the most efficient players in the country. Not only is he scoring more than twice as many points as he did last year, he is also doing it while using less than 14% of his teams possessions. Statistically, he is easily one of the most efficient players in college basketball. He is ranked 13th amongst draft prospects averaging 1.3 points per possession, and in the top 20 amongst post players in PER (29.6) and Efficiency per 40 minutes (28.4). However, his most important number may be his field goal percentage which ranks him in the top 10 amongst all draft prospects at 67.4%.

Jackson gets a good amount of his points around the basket. He has good offensive awareness and always seems to be in the right place at the right time around the basket. While he does not always show the best instincts, he uses his body well and has good hands to catch the ball. This offensive awareness is what really sets him apart from the pack, and is partly the reason that he is such an efficient player.

Utilizing his nice touch and body control, he is able to score over taller and more athletic players in addition to being able to draw contact around the basket. Also impressive is how active he is around the hoop, always in the mix for offensive rebounds and finishing after collecting missed shots. However, most impressive thus far this season is how well he finishes in transition. He runs the floor well for a big man and loves to be on the receiving end of alley-oop passes that he emphatically dunks. These opportunities are possible because he clearly has the trust of his guards on the offensive end, and this chemistry is combined with his good hands and nice touch.

Despite the assumptions usually made about high shooting percentages, Jackson does some damage away from the basket as well. Jackson has become a decent spot up shooter from mid-range, and has range out to the college three-point line. His mechanics are a little inconsistent at this stage, and he is shooting awkwardly from his chin at times. However, his improvements in the past season into a good set shooter might indicate that he has room to grow as an offensive post player and. While he might not be the best prospect at the moment, he might be able to develop into a Udonis Haslem type role.

To do that, he must show that he can defend his position at the next levelsomething that seems questionable at best right now. His effort here leaves much to be desired, displaying poor lateral quickness and not seeming to put as much effort in on this end of the floor. He has decent athleticism and size, but for some reason or another cannot translate his superb timing on offense to his defensive effort. He shows poor awareness, does not contain his man in the paint, and is frequently beaten off the dribble when trying to defend the pick and roll. In order for him to have any potential at the next level, he is going to have to improve.

Jacksons improvements are nice and he is steadily moving towards becoming a draft prospect. However, he must continue to play his role and maintain his efficiency if he wants to get there eventually. Hell likely be looked at as a candidate to play at Portsmouth, and seems to be the type of player that can make a name for himself in an increased role there. Kansas looks like one of the premier teams in the country and Jackson will certainly have many opportunities to prove himself throughout the remainder of the season.
Read full article