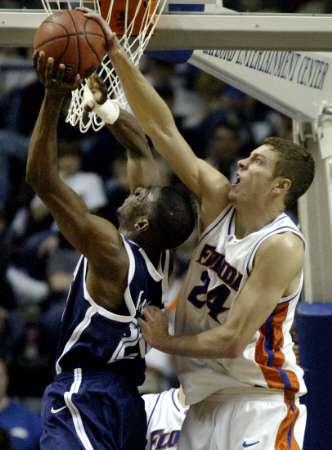 Matt Williams
@DraftExpress
Overview: An extremely productive lefty power forward who makes an impact with his hustle, smarts and athleticism. One of the better rebounders in the league. Has adequate size and length for the power forward position, at 6-9 in shoes with a 7-foot wingspan. Pretty strong as well, and has the frame to get bigger. Possesses great leaping ability, and a quick second leap. Runs well for his position. Doesnt offer much in the way of perimeter skills. Gets the job done underneath with hustle and rebounding. Relentlessly cleans the glass. Brings a lot of energy to the defensive end. Has always been a hardworking player with great athleticism. Had a nice four year career at Florida, and was one of the most efficient players in college basketball during his time there. Was a pleasant surprise as a rookie and has become a solid contributor. Still has some upside, and needs to develop his midrange jumper. Not an ideal cornerstone by any means, but the kind of player that coaches love and any franchise would be happy to have. A huge steal for the Knicks as the last pick in the 1st round.

Offense: The epitome of a hustle player offensively. Very smart player who is a good passer and extremely unselfish. Very sound on the offensive end. Doesnt need plays called for his to score, and will put up numbers with extremely high efficiency. Gets almost all of his touches by working hard outside of a few touches with his back to the basket every game. Moves extremely well without the ball, making room for his teammates to drive and filling gaps for easy baskets. A fantastic finisher around the basket thanks to the quickness in which he gets off his feet. Does a great job cleaning the offensive glass, always pursuing the ball off the rim. Terrific on the pick and roll-- sets very solid screens and rolls hard to the basket. Runs the floor extremely well for a player his size. Does everything you look for from a hustle player, but also has a nice skill set to go along with it. Will get some opportunities in the post, and loves to face up. Has no trouble getting off his jumper when he turns to face and has the quickness to get by many power forwards. Not an amazing ball-handler, but is crafty enough to know how to get to the rim and finish. Isnt afraid to take contact, and shoots a great percentage from the line. Not an ideal catch and shoot player, but is able to make some shots from 15 feet and in. Could still stand to work on his right hand, but shows a willingness to work over his left shoulder. Wont try to force passes and doesnt turn the ball over very often for that reason. Becoming a better shooter from the perimeter could help him become even more prolific offensively.

Defense: A solid defensive player due to his athleticism and effort level. Very good at defending players that like to stake out in the high post. Has the lateral quickness to stay in front of most power forwards. Suffocates his man on the perimeter when he knows he has a quickness advantage. Isnt a great defender in back to the basket situations, but fights hard for position, doesnt let his man get anything easy, and always gets a hand up. Will get beaten by stronger players who dont get intimidated by his physical style of player. Does a good job going straight up and committing a ton of silly fouls at the rim. Isnt much of a shot blocker, but will rotate over from the weakside to contest shots. Gets a lot of deflections, but not many steals. Shows great anticipation on the glass. Always seems to be boxing out and getting in on the actions on the glass. Extremely productive as a rebounder. Plays a very smart brand of defense for a player with his level of experience, although hell probably never be a great defender due to his average size and bulk.
Read full article

Strengths
A terrific athlete. High riser that loves to dunk with authority. Extremely quick and mobile in the post. Possesses a nice array of post moves, great footwork, Ambidextrous, meaning he can dribble and finish equally well with both his left and right hands (he's a natural lefty). Lee is especially good at establishing position in the paint and his soft hands make him a reliable target in the post. Has bulked up significantly, putting on over 15 pounds of pure muscle and dropping his body fat from 12% to 7%. Free throwing shooting has improved leaps and bounds, from under 55% his freshman year to over 75% this season. Could leave Florida as the all time best field goal shooter in school history, currently at 62%. That should tell you a little bit about the role he played for the Gators. Outside shooting has improved as well, used to be extremely limited outside the paint but is now hitting shots from the perimeter and especially from the baseline on a regular basis. If this trend continues he will be extremely a very tough player to match up with. Runs the floor well and is always a streaking threat on the break. Has good handles for a big man and likes to take his defender off the dribble. Lee is also a very gifted passer out of the post, he might be the best passing big man in the NCAA. He has a knack for finding the open man and passes extremely well out of the double team.

Weaknesses
Only really started playing Power Forward this year after manning the 5 spot his first two seasons, and that might of hurt his development somewhat. Measurements will be key, especially his wingspan. Lee is just an average rebounder for a player with his athleticism and frame. He doesn't box out well enough and he is often out hustled in the paint by stronger players. He manages to grabs lots of Offensive boards though which somewhat makes up for that. Defense needs to drastically improve to stay on the court in the pros. As of right now he will be outmuscled in the post by some of the bigger PF's in the league unless he continues to work hard and gets bigger and meaner. He'll be wearing the soft tag until he decides to prove to everyone he's not. Has shown some improved range but not enough to convince everyone just yet. Tends to disappear at times on offense and doesn't demand the ball from his teammates. Easily frustrated if things aren't going his way. Not a very vocal leader on the floor and hasn't produced for Florida in the clutch when he is most needed. Conditioning is somewhat of a concern. He is so energetic that he is often drained at the end of games. Will need to learn to conserve his energy if he is to play 82 games a year.

Outlook
Lee openly talked about declaring for the draft last year and has dropped clues suggesting that this is the year. In all likelihood he will come out this season barring a serious injury. Lee's NBA potential is still very much up in the air right now. He has all the tools to become a great player and a fan favorite, but some would say that his first two seasons were a disappointment for all the hype he received coming out of high school. His play in March, workouts and measurements will decide where he will land on the board. Right now he could go anywhere from late lotto all the way to the early 2nd round. Some people might not want to hear this, but Lee's athleticism which is almost unheard of for a Caucasian player could play a role in where he is drafted. He is an extremely smart and likeable young man and the marketing possibilities are endless when it comes to a player like him.

Comments
In spite of the fact that Lee is an NCAA Junior already, he is far from being a finished project. Many would say that he was not utilized correctly in college, as Florida has always been a perimeter oriented team and Lee was asked to go down low and do the dirty work which his game is not suited for. The best thing for Lee would be to play for a coach that will motivate him to work on becoming a more complete player and to rely less on his athleticism. Lee doesn't have star potential, but he could very well become a serviceable player in the league if he can figure out what his role is on the team.