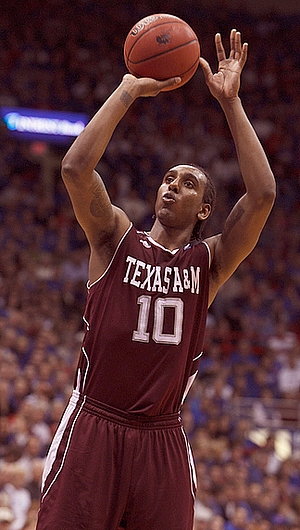 Steadily improving his minutes and production his three years in campus, David Loubeau has developed into a solid college player heading into his senior season. Standing 6'8 with a good wingspan and nice coordination and mobility, Loubeau is undersized for his position and not very explosive, but he has a decent package of skills that he brings to the table.

On the offensive end, Loubeau does almost all of his work in the paint, where he operates primarily out of the low and mid post. Utilizing a combination of back-to-the-basket moves and short face-ups, Loubeau does a good job using moves and countermoves while showing the ability to adeptly finish with either hand.

As a post-up player, Loubeau relies primarily on hook shots with either hand in the 5-8 foot range, where he possesses nice touch and instincts. He shows good footwork along with a propensity for faking and using countermoves, often using spins and up-and-unders to fake out his man. He also shows no problem utilizing his body, having a solid power game and the ability to finish through contact and get to the free-throw line.

On the down side, Loubeau's size hurts him in his ability to finish down low, and he doesn't have many advanced moves to get good separation, something that is even more problematic against NBA-caliber competition. His lack of explosiveness and inability to play above the rim except when open in space also pose problems for the transition of his post-game to higher quality competition.

Beyond his back-to-the-basket game, Loubeau does a solid job contributing on short face-ups and finishing on pick-and-rolls, showing good agility and nimble feet for his size, doing a good job to catch and finish in traffic. He's creative with his lay-ups, showing the ability to finish with either hand and go under the rim to avoid his man, something that allows him to finish well at this level. His ability to separate and get high percentage shots against bigger, more athletic defenders is an issue in this area of his game as well, however.

One thing Loubeau doesn't show much of on the offensive end is a spot-up mid-range jumper, something that will likely be a necessity to find a niche in the NBA for a player in his mold. He did shoot a respectable 74% from the free-throw line as a junior (up from 56% as a sophomore), but rarely takes jumpers in the half-court offense, where his results are less impressive.

On the defensive end, Loubeau's size and below average quickness are problems both in the post and on the perimeter, where he's often beaten laterally and shot over. He shows a good motor and a basic groundwork of fundamentals, often staying in plays and putting his hands up to contest shots, but he projects to have problems consistently defending frontcourt players in the NBA. His lack of explosiveness also shows up as a help-side defender, where he blocks just 0.4 shots per game in 26.4 minutes.

Much more damning to his prospects, however, is Loubeau's very poor ability on the glass, where he pulls in a very weak 7.9 rebounds per-40 pace adjusted. For a player with his physical profile and skill set, he'll likely need to be an above average rebounder at the least to find a long term spot in the NBA, and he'll need to make up serious ground here as a senior.

Looking forward, Loubeau's ability in the post and on pick-and-rolls combined with his good strength and length give him something to build upon projecting to the next level, but developing more complementary skills like a jump shot and especially better prowess rebounding the ball will be paramount to his chances.
Read full article