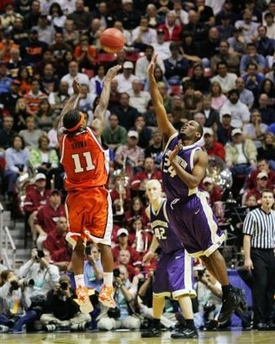 Jonathan Watters
@DraftExpress
This was obviously not the way Dee Brown wanted to end his college career. Starting off the game about as poorly as weve seen all season, it was a miracle that Illinois even managed to stay in it until the very end. Brown had doughnuts on his stat-line until there were 5 minutes left in the first half, coming up with 0 points, 0 assists and 0 rebounds on 0-6 shooting and facing a 14 point deficit. He was completely shut down during this stretch by extremely long and athletic 6-7 swingman Bobby Jones, smothered by his size and length and unable to create anything for himself off the dribble. Weve spoken about the weaknesses he has creating shots for himself off the bounce, but here Brown was completely exposed.

To his credit Brown managed to get himself together and with 5 minutes made a 180 degree turnaround back to the player the entire nation grew to adore these past few years. He executed extremely well on the pick and roll and even started having success taking the ball to the hoop. A buzzer beating 3-pointer capped off an outstanding run that cut the deficit to just two points at the half. He continued his excellent play for most of the 2nd half as Illinois built up a comfortable lead, looking at his absolute best pushing the tempo of the game in transition and getting his teammates involved.

Brown then went cold again with about 7 minutes to go in the game, not even making one field goal during that stretch. A poorly executed play to try and tie the game with 6 seconds remaining in the game resulted in a contested 30 foot 3-point attempt that went off the back of the rim, ending Browns fantastic college career on a sour note, and again showing us how tough it can be to create space for himself to operate.

His fate is now in the hands of whichever agent he will choose and the NBA GMs who will watch him travel around the country for private workouts. Hes made a pretty good case for himself to be drafted in the 1st round, but that now depends on how he performs from here on out as well as how many underclassmen decided to enter the draft.
Read full article

Strengths
One of the fastest players in college basketball in the open floor. Browns well-deserved nickname is the one man fast break, a title he has earned for his ability to get from one end of the floor to the other in the blink of an eye.

As a point guard, Brown has a good sense for being able to find the open man--especially off the dribble-- thanks to his instincts as a basketball player as well as his unselfishness. As his senior year progressed, he adapted more and more to playing the point, trusting his teammates and learning to utilize their strengths on his way to posting a very solid 2/1 assist to turnover ratio. His team played a very particular (and highly effective) style of basketball which needed a point guard that knows how to control tempo on both ends of the floor. Brown executed this role fairly well, especially considering his lack of experience at the point.

As a shooter, his numbers dropped off dramatically in his senior year, but it can not be forgotten what an outstanding perimeter threat he was in his junior year (50% FG, 43.4% 3P) helping his team reach the national championship game. He moves off the ball extremely well and is a superb shooter in catch and shoot situations.

Browns size and quickness allow him to stay low to the ground and minimize careless turnovers thanks to his ball-handling skills. He plays under control for the most part and is a smart player who understands the game, even though the role he played at Illinois this year wasnt tailor made to his strengths.

Brown is one of the better on-ball defenders in the NCAA. He has extremely quick feet, superb instincts to stay in front of his man and anticipate steals to ignite the fast break, outstanding hands and a relentless motor that just does not quit. His ability to play tough pressure defense and get in his mans face at all times is a staple in Bruce Webers outstanding half-court defense.

Brown has excellent intangibles, appearing to be the type of player who is programmed to succeed. He has great leadership qualities, an excellent work ethic and a superb demeanor both on and off the court. Brown is a natural born winner whose energy and enthusiasm for the game is infectious. His charisma and flair have made him a fan favorite not just locally, but around the country, as well as a media darling to the point that he is one of the most recognizable faces in the college basketball. Teammates enjoy playing with him, and rival opponents respect him. Hes an excellent student as well, finishing up his bachelors degree early and being named to the All-Big 10 Academic team in his sophomore year.

He played for one of the top coaches in all of college basketball in Bruce Weber, known for his complicated offensive and defensive schemes, and garnered plenty of experience playing in a top conference and with multiple appearances in the NCAA tournament.

Weaknesses
Browns most obvious weakness would be his size. He measured in at 6 feet even in shoes at the Chicago pre-draft camp last year, 179 pounds and a 6-2 wingspan; all below average for an NBA point guard.

After 3 seasons of playing next to an eventual Top 5 draft pick in Deron Williams, Brown made the full-time transition to the point guard position only in his senior year. He has gotten better and better as the year progressed, but has still been very inconsistent throughout the season in terms of scoring and running the point simultaneously. It seems as if Brown will either have a big scoring game or will do a wonderful job running his team and racking up assists; never both at the same time. He is also a much better point guard in motion than he is in static situations, struggling to execute seemingly simple passes at times with his feet set but looking outstanding on the drive and dish for example.

Despite his fantastic speed in the open floor, Brown is surprisingly weak at creating his own shot and taking the ball all the way to the hoop. With the shot clock running down Brown is more likely hoist up a tough contested 3-point attempt than take the ball strong to the rim or pull up from mid-range. He struggles to create space for himself breaking his man down off the dribble, as he lacks some of the crafty ball-handling moves that most shot-creators possess in their arsenal. He doesnt quite know how to change pace and use advanced perimeter moves such as jab-steps or head and ball-fakes to get his man off balance; Brown will either blow right by his man strictly using his first step or he wont be able to do anything except pass off or settle for the 3.

This year hes been exposed (in no small part thanks to his poor shot selection) as a player who is not nearly as good shooting off the dribble as he is from stand-still positions. And since hes had to handle the ball so much more than last year in an offense that likes to control tempo and grind it out at times, this has hurt his percentages both from the field and from 3-point range, down from 50% and 43.4% respectively to 37% and 32.5%. He only gets to the line about 3 times per game, emphasizing the fact that he just does not take the ball strong to the hoop enough to finish or draw contact. When he does get to the basket, he lacks the tools to finish the play, such as a great vertical leap, long arms, strength or height. In the NBA he will have to work on adding betters tools to finish in traffic, such as floaters or runners he can use in the lane, or better yet a consistent pull-up jumper from mid-range.

Competition
A highly touted player coming out of high school, Brown was named a McDonalds All-American in 2002.

Brown has been a starter for all four years at Illinois, never averaging less than 32.6 minutes per game in a season. Hes always put up excellent numbers in one of the tougher conferences in the country in the Big 10. The most impressive number on his stat sheet is probably his 658 career assists, compared with just 290 turnovers. His 2.26 a/to ratio likely puts him at the top of the list compared with other point guards competing with him in this draft.

Brown declared for the draft in 2005 after helping his team to the National Championship game and winning All-Big 10 player of the year honors. He went to the Chicago pre-draft camp and was off to an excellent start before he unfortunately broke his foot in one of the games, forcing him to return for his senior year.

His numbers and accolades in his long and excellent basketball career are too many to mention in this space, so please check out his profile on Illinois website, which you can find in the links section.

Outlook
Brown projects as an excellent sparkplug backup PG to bring off the bench, wreak havoc on both ends of the floor with his blazing speed, do an acceptable job running his teams offense while pushing the tempo of the game and knock down open shots that are created for him by others. The only question is how much will an NBA team value a player of this sort. Barring an outstanding performance in the NCAA tournament, he appears to be a strong candidate to get drafted somewhere from 20-40 in this draft.

Landry Fields
@DraftExpress
Another one of the players who stand more to gain or lose than almost anyone else in this tournament, this will be Dee Brown's last shot to show NBA scouts, GMs and executives that he has fully mastered the point guard position and is able to lead a team on a deep run with him at the helm.

Brown has struggled at times this year mixing up his scoring with his passing; all too often it appeared that he is only capable of doing one or another. He has gotten better and better at this as the year has gone on, though, and was the main reason why Illinois did not lose much of a beat and will go into the tournament with a good seed and the high expectations of a potential return to the final four.

Brown's shooting percentages have taken the biggest dip this year, as his inability to create high percentage shots for himself and his teammates off the dribble with the shot clock running down has seen him force many tough, contested shots from well beyond the NCAA 3-point arc. In the NBA he most likely won't have to handle the ball as much as he has for an Illinois team that plays terrific defense and likes to grind it out at times on the offensive end, and Brown has shown the ability to effectively control the tempo of the game to Bruce Weber's liking and still play his trademark pesky pressure defense.

A natural born leader, Brown will be followed closely by NBA personnel, basketball fans, and the national media alike. He has a tough task ahead of him, but a solid showing here will likely solidify his spot in the first round of the 2006 draft.
Read full article