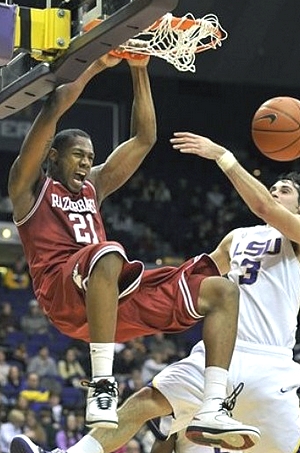 The book on Arkansass prospects for a successful season is still being written after an 11-4 start, despite a somewhat anemic offensive effort from the Razorbacks  one that ranks 176th nationally in Offensive Efficiency. Perhaps then it is appropriate that the most intriguing pro prospect suiting up in Fayetteville this season is strictly known for his work on the defensive end.

Delvon Johnson is likely an unfamiliar name to most fans, even those inside the SEC. A college journeyman who began his career at Western Illinois, transferred to Indian Hills Community College (Iowa) following his freshman season, before landing at Arkansas last season as a junior. He served as a role player last season, but with a significant increase in playing time this year, Johnson has blossomed as an impact defender inside for the Razorbacks, showing flashes of ability that will likely get him plenty of looks from NBA scouts.

The best thing Johnson has going for him right now is his physical makeup. Standing 6-9 with a sturdy frame, he is blessed with a great wingspan and very nice athleticism for a player his size. He runs the floor well, shows enough quickness to defend the pick and roll and can get off his feet quickly to finish plays and block shots. He's in excellent physical condition, packing a good 230 pounds of pure muscle onto his frame and certainly shows the potential to add another 10 pounds without sacrificing any athleticism.

The important thing to understand when considering Johnson's pro prospects is he will not be asked to score, anything he drops into the basket has to be considered a bonus. With that said, the senior is a woeful performer at this end of the floor save for finishing drop off looks within five feet of the rim. He does a good job of establishing and holding his position on the block, but once he receives the entry pass Johnson often looks uncomfortable and inattentive to his surroundings. His footwork is unpolished and often rushed, while his repertoire is devoid of any reliable moves, consisting primarily of a baby hook shot to the middle of the lane that is often rushed.

Again, at the next level Johnson isn't likely to be asked to create any offense for himself, save for producing on the offensive glass, something he has excelled at this season to the tune of 4.3 rebounds per-40 minutes. As previously mentioned, he does run the open floor well in transition and is a strong finisher at the rim, so he could certainly steal a couple of baskets in this fashion as well.

Defense is where Johnson is going to make or break his pro aspirations. In his first season of seeing significant minutes at the Division 1 level he has emerged as one of the nation's elite shot blockers, ranking second in our database in blocks per-40 minutes at 4.8. The senior shows excellent anticipation and body control when challenging shots, benefitting from his length and quick leaping ability which allows him to leave his feet after the shot has already been released. This carries over to scenarios where Johnson is guarding spot up shooters, able to play off the ball an extra half step without sacrificing his ability to challenge shots. This also benefits him when opposing players opt to attack off the dribble, as his lateral quickness while good enough to allow him to defend the pick and roll, doesn't afford him the same luxury in the isolation setting.

Where the senior's defense becomes suspect is in the post. Despite having the physical strength to hold his ground, Johnson often concedes position to opposing big men, allowing them to set up very deep on the block, which puts him at a significant disadvantage even with his shot blocking prowess. This was particularly evident in the Razorbacks loss to Texas last week when Longhorn freshman Tristan Thompson routinely scored with ease on Johnson. The other noticeable trend in his interior defense is the tendency to overplay his man to one side which often leads him susceptible to entry passes over the top.

With all of that said, he has shown time and time again the ability to alter shots in and out of his immediate area when roaming the paint. He challenges almost everything around the rim and is a significant deterrent to opposing teams. He has also managed to stand out as a rebounder at this end of the floor as well, overall pulling in almost 11 rebounds per-40 minutes.

Looking to the future, Johnson is a long shot to be drafted, but he certainly has a similar makeup to several other players who have managed to land on pro rosters ala Joel Anthony or Jeremy Evans. The senior's role at the next level will consist of rebounding, defending and finishing at the rim, all things he has done at the collegiate level. Johnson will need to continue producing, particularly at the defensive end of the floor and hope that he makes enough of an impression on a team that is willing to take a chance on either in the second round or as a free agent prospect down the road.
Read full article