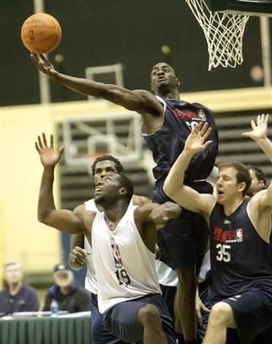 Eric Weiss
@DraftExpress
Brown had an up-and-down camp, at times showing off some good scoring abilities from the mid-range and around the basket, but at others forcing his shot and hurting the flow of his teams offense. Brown didnt show off much of anything new here, showing the same versatile game he showed at UConn, which is lacking one true standout ability.

He has a good in-between game, but at only 65, its hard to say how well that ability will translate to the NBA, where he will be going up against bigger, more athletic players. He doesnt have exceptional quickness, so its not going to be easy for him to create some of the mid-range shots he took here and effectively get them off over bigger defenders. Hes not an exceptional three-point shooter either, though thats something hell probably need to work on to find some place to stick in the NBA. He is a good defender at the swingman spots, and also a pretty solid passer, ball-handler, and rebounder for the position.

As noted above, Brown is a very versatile player, but in terms of NBA translatable skills, he doesnt have one standout quality, which is what most teams look for with role players. Brown has a decent change to get picked in the second round, and probably make a roster, but its tough to see him cracking a teams rotation until he develops something teams could rely on consistently offensively.
Read full article

Joseph Treutlein
@DraftExpress
Brown had a pretty non-descript game up until the final 10 seconds of regulation, when he changed gears and stepped up in the clutch. With the Huskies down by two, Brown took the ball baseline, dribbled past a defender, and put it in for a reverse off the glass to send the game into overtime with a buzzer beater. Brown continued his attack in overtime, getting to the line twice off a post-up and a cut, then making all four free throws. He also played some very aggressive defense on George Mason guard Lamar Butler, locking him down for all but one play when he overextended with help in the post, leaving Butler open for a spot-up three on the kickout. UConn was down by two with a few seconds remaining in overtime, a very similar situation to the end of regulation, and Brown again took the last shot. But this time, he missed a pull-up three-pointer that wouldve given them the win, sending them home in a crushing defeat by the 11th seed.

Brown perhaps did more in the final 5:02 than he did in the rest of the game combined, just blending into the flow of the UConn offense. He did have five rebounds, fighting hard for all of them, and a few nice post entry passes over the course of the game. He also didnt make many mistakes and helped keep the UConn offense flowing with his passing. Browns greatest strength is widely noted to be his defense, but we didnt see much of it in this game. There were just not many opportunities for him to display it, as the George Mason guards never tried to penetrate on him.

Brown, a senior, projects as a second-round pick in the upcoming draft. As for where he will go in the second round, thats all up to him. Hell have plenty of opportunities to make a case for himself at both the Portsmouth and Orlando pre-draft camps, where he will no longer be playing in the shadows of the future lottery picks that have surrounded him throughout his tenure at UConn. His defense alone should get him some looks at roster spots in the NBA, but taking on a larger offensive role would do a lot for his stock. He did score 20+ points on three occasions this season, so he is capable of doing it.
Read full article

Landry Fields
@DraftExpress
A player with solid all-around ability in many facets of the game, Denham Brown has recovered from injury problems and poor outings from December through mid-February to become possibly UConn's best player down the stretch. If that excellent momentum continues into the NCAA tournament and pre-draft camps, Brown could certainly translate that into a selection in the NBA draft come June.

As an NBA draft prospect, Brown is very good in many different aspects, but does not stand out in any specific one. He is a good, but not great athlete; a decent, but not very consistent outside shooter, a solid, but unspectacular ball-handler and shot-creator, and an acceptable defender at the college level who might be a bit stuck between the 2 and the 3 spots for the NBA. All in all his numbers have been fairly disappointing this year (39% FG, 31% 3P), but he has a chance to make scouts forget all of that if he can find a way to be UConn's jack of all trades in the NCAA tournament.
Read full article

Landry Fields
@DraftExpress
Being one of the most important players on possibly the most talented team in the country is a surefire way to get attention from NBA scouts, but from what weve seen of Brown this season and over the past three years playing for UConn, its not really clear how much that is going to help.

First the good. Brown is clearly the leader of this UConn team and very likely will be the X-factor in many of their key games this season. He is strong and extremely tough, with great size and a knack for putting the ball in the basket in tough situations. In the all-too common cases of teammate Rudy Gay floating around the court aimlessly, Denham Brown was often the one that stepped up the plate for his team to deliver points when his team needed them most. He is committed to playing good defense, minimizing mistakes and moving the ball around the floor unselfishly, and UConn will rely on his scoring ability and senior leadership all season long.

Now the bad. In terms of his NBA draft potential, how does Denham Brown stack up with most NBA shooting guards? Not extraordinarily well from what we saw in Maui. His quickness is very average, as is overall athletic ability compared with your typical explosive NBA shooting guard. His ball-handling, shot-creating ability and perimeter shooting do not appear to be all that special either to really make up for that. Defensively he is quite solid at the collegiate level because of his strength, smarts and the effort he puts in. How his lateral quickness will translate to the pros in terms of guarding his position is anyones guess, though. For a player that will get as many open looks as he will likely benefit from playing alongside such a dangerous frontcourt as UConns trio of Gay/Boone/Armstrong is, youd like to see him knock down his outside shots at a much higher clip. Brown will surely get his chance to prove himself at Portsmouth and probably Chicago if all goes well there, but his road to the NBA will not be as easy as most TV analysts and beat writers might lead you to believe.
Read full article