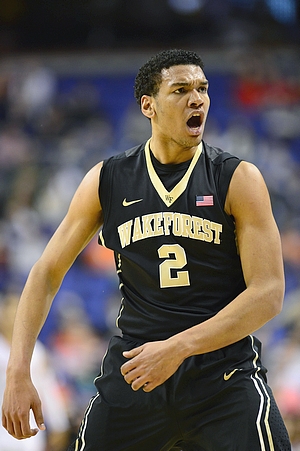 Jonathan Givony
@DraftExpress
One of the more pleasant surprises of the USA Basketball U19 Training Camp, Devin Thomas ultimately didn't make the cut due to the number of big men in attendance, but certainly held his own and looks like a player to keep an eye on for the future. Not particularly heralded out of high school, he was nevertheless named to the ACC All-Freshman team after a very solid first season.

Solidly built at 6-9, 240 pounds, Thomas is not an overly impressive athlete, looking decidedly below the rim on his finishes. He brings a terrific combination of intensity, smarts and fundamentals to his position, though, competing extremely hard on every position and showing a very good feel for the game considering his age. He ran the floor hard, battled inside and made some very impressive passes throughout the week, while showing excellent awareness on the defensive end.

Offensively, Thomas is primarily a back to the basket threat, even if it remains to be seen how this part of his game might translate to higher level competition. His jump-shot is very flat and he's not much of a threat outside the paint, while his lack of explosiveness makes it difficult for him to convert around the basket in traffic at times.

Thomas was one of the best teammates on the squad, which made it appear that he might have a real chance to make the roster based on intangibles alone. He was constantly talking on both ends of the floor and encouraging everyone around him, seemingly possessing very strong leadership skills and a good work ethic.

His upside perhaps isn't as high as some of the other players on this roster, but if he continues to polish his skill-set and can find a way to improve his versatility on both ends of the floor, he's the type of player who could emerge as a prospect later on in his career.
Read full article