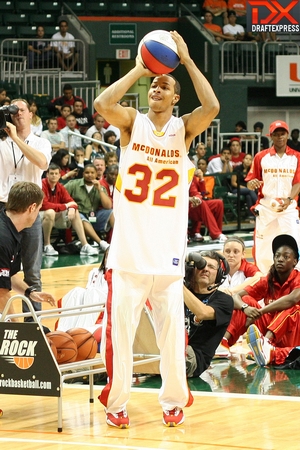 Joseph Treutlein
@DraftExpress
Dominic Cheek is another player we wanted to take a long look at, but again there was only so much we could take away, especially with his non-aggressive offensive demeanor. Thats not an insult to his game, as he appears to be very comfortable doing the little things, playing off his teammates, something he does well, knocking down spot-up jumpers and cutting off the ball to finish at the basket. Cheek is also formidable on the defensive end, where he plays pretty aggressive and uses his physical tools well. Hes a good athlete with good size and length for his position, though his body is a bit underdeveloped, as he could definitely use some time in the weight room.
Read full article

Dominic Cheek (#15 Scout, #16 Rivals, #15 ESPN¬) was able to assert himself fairly well when felt like it over the course of this week, mostly by using his excellent yet highly unorthodox perimeter stroke, both in standstill positions and off the dribble. His ball-handling skills remain improvable, but he has the instincts and smarts to know how to get by at this level without too many problems. He seemed to turn it on and off at times, not always looking all that engaged, which is something we noticed from observing him over the course of the past year, but regardless remains a stud recruit for Jay Wright at Villanova.
Read full article

Jonathan Givony
@DraftExpress
Only a week or so removed from losing in the finals of the U-18 FIBA Americas Championship, Dominic Cheek (#11 Scout, #11 Rivals, #5 ESPN) decided to pass on playing in the AAU tournaments in Vegas, but luckily for us, we had the chance to fully evaluate him in the USA Basketball tryouts in early July in Washington DC.

What we saw made a very strong impression. Cheek is a 6-5, long, athletic and very versatile shooting guard, obviously well coached as youd expect from a Bob Hurley pupil, but also extremely mature both on and off the court. He appears to be an excellent teammate, comfortable doing all the little things for his team, whether thats hustling for rebounds, making unselfish passes, stepping in for charges, or going after loose balls. Hes a very tough, active player who always seems to be around the ball at all times, and seems to play the game at his own speed, with an excellent temperament. He seems to have a lot of confidence in himself, but still isnt afraid to give up the ball and play within the flow of the offense.

Cheek is an excellent shooter, although he shoots the ball with awkward form, well on the way down of his jump. Hes money in the bank with his feet set, though, so its tough to argue too much with the results, even if his release is slow and he may suffer a bit when attempting to expand his range out to the further out college and eventually NBA line. He can handle the ball, but isnt what you would call a go-to scoring option at this pointhes more of a role player who does many different things out on the floor. How much he can improve his scoring ability over the next few years will probably decide how highly regarded a prospect he becomes.

Cheek is a very highly sought after recruit, for obvious reasons, and it will be interesting to see how his game develops over the next few years.
Read full article