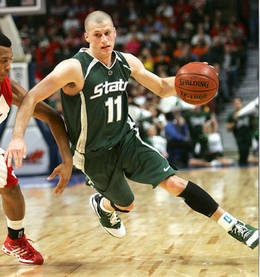 Joseph Treutlein
@DraftExpress
Michigan State senior Drew Neitzel enters the 07-08 season as The Big Tens leading returning scorer, after posting an 18.1 point per game average as a junior. His drastic improvement in the scoring column was remarkable, given that the only scored 8.3 points per game as a sophomore. With the early departure of Ohio States Mike Conley Jr. to the NBA and Indiana freshman Eric Gordon playing more of a combo guard role, Neitzel comes into the season as the top guard in the conference, as well as the catalyst to the Spartans success.

The biggest asset that Neitzel brings to the floor is easily his ability to shoot the ball. Shooting nearly 42% from the 3-point line as a junior, he scored over half his 18 points per game from behind the arc. The Michigan native is remarkable at coming off of screens at full speed, setting his feet, and getting the ball off quickly with accuracy. He is equally adept shooting the ball of off pick and rolls, comfortable going to both his left and his right. Despite his marginal athleticism, he is outstanding creating space for himself to get his shot, a testament to the excellent basketball IQ he possesses. There is no question that Neitzel will enter his senior season as one of the elite perimeter shooting point guards in the country.

3-point shooting aside, the next biggest asset that Neitzel provides is easily the intelligence he displays. He has never posted less than a 1.84:1 assist to turnover ratio throughout his tenure in East Lansing, evidence of the impeccable decision making that the senior possesses. His basketball smarts dont stop there, however, as they are also on full display with the way he comes off screens when moving off the ball, and the way he uses picks when he has the ball in his hands as well. He is equally comfortable shooting the ball from the free throw line, where he shot an excellent 88% last season. All in all, the senior does an excellent job making up for his physical deficiencies through his witty play on the floor.

With nearly half of his points coming off of screens of some sort, Neitzel does not do a whole lot when it comes to creating shots for himself. Although his handle is very tight and crisp, he struggles a bit in terms of beating his man off of the dribble in isolation situations. The Spartan guard is not very efficient from midrange off of the dribble, and especially has problems getting all the way to the rim. His lack of size and speed is a hindrance in terms of converting in the paint against players who are taller and more athletic than him.

Listed at only 60, Neitzels size becomes a problem for him on the defensive end. Opposing guards showed throughout last season that they had no problem shooting over the diminutive guard at every available opportunity. The relatively average strength and lateral quickness that he possesses gets exploited on a regular basis, with most opposing coaches isolating whomever Neitzel is guarding somewhere on the floor. Although Neitzel has proven to be a tough kid on the offensive end, it hasnt helped him make up for his defensive deficiencies unfortunately.

Lacking the ideal physical gifts that most NBA teams desire in a point guard prospect, Neitzel will have to make up for his lack of athletic prowess through outstanding play in his senior season. Given that this draft has the potential to be absolutely loaded at the point guard position, he will need to have an outstanding senior season in help his cause of being drafted in late June. Either way, Neitzel is a player who will certainly be invited to the pre-draft camps and will end up making a very nice living playing basketball somewhere in the fall of 2008, whether it be in Europe or the NBA.
Read full article