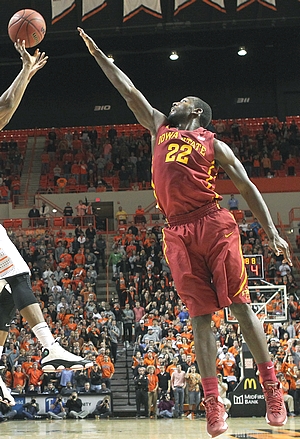 After spending two years at Indian Hills Community College, Dustin Hogue transferred to Iowa State where he was expected to provide toughness and versatility in Iowa State's multifaceted and talented frontcourt. Rather than fading into the background, Hogue ended up playing an essential role during Iowa State's run to the Sweet 16, where he averaged 17.7 points and 7.3 rebounds, including 34 points against eventual national champion Connecticut. With Melvin Ejim and DeAndre Kane lost to graduation, Hogue will have to rise to the challenge of not only providing Iowa State with his reputed toughness, but also shouldering a larger load within the Cyclones' offense.

At 6'6 with a strong 220-pound frame and a solid wingspan, Hogue looks the part of an NBA wing. He is a good athlete, as well, quick and explosive while being aggressive enough to maximize his physical tools on every possession. That being said and while Hogue looks like a wing, he spent most of his time at power forward or center, and he simply is too small to man the post at the next level, no matter how aggressively he plays.

Though he averaged an underwhelming 14.1 points per 40 minutes pace adjusted, he was incredibly efficient to the tune of 64.6% 2P%, while displaying proficiency operating in a variety of situations on the offensive end of the floor.

On the offensive end of the floor, Hogue exhibits a quintessential tweener's game. Perhaps most notable is Hogue's ability to move without the ball. He proved himself to be an expert at cutting to the basket, attacking the offensive boards, and running in transition, all of which allowed him to find easy looks around the basket without being featured that often in Iowa State's offense. Hogue saw a small part of Iowa State's possessions, but nonetheless managed to assert himself through sheer effort, awareness, and athleticism to find his own offense.

Also impressive is Hogue's ability to fight for looks in the paint. Despite standing just 6'6, Hogue is not afraid to back his man down, utilizing both his toughness and quickness to take the ball to the basket. Additionally, he has excellent body control and has a knack for exploiting defensive lapses to score in a variety of unorthodox ways off of the block.

Though his efforts in the post are admirable, Hogue projects as a small forward at the next level and the question remains as to how prepared he is to fulfill such a role. Two important indicators are his shooting mechanics and his ball-handling ability.

On film, it is easy to tell that Hogue isn't a natural shooter. Despite that, he was able to be relatively productive when in rhythm, and excels in catch-and-shoot situations to the tune of 38.1%. When he has less time or has to initiate his shooting motion by himself, he is far less effective and his mechanics reflect as much, as he tends to fade away from the basket and his release loses its fluidity. It's worth noting that he attempted only 64 perimeter jump shots, and he may continue to improve if he can turn his perimeter jumper into a more prominent aspect of his game. As of now, however, his solid, but unspectacular 34.4% 3FG and 66.4% FT indicate that he has a ways to go in this area.

Even less developed is his ball handling ability. Hogue's slashing game is average at best, limited at the moment to straight line drives at the basket. Additionally, he has very little mid-range game, which points to how raw he is technically amidst the flashes of potential that were so intriguing in March.

On the defensive end, Hogue's prospects are similarly mixed. There is one very obvious explanation, insofar as he is 6'6 and 220-pounds and guarding power forwards and centers. More troubling is the fact that he tends to give shooters too much room and, far too often, he gives up early on plays, even if he has managed to stay with his man throughout. Hogue displays very good lateral quickness and timing, but lacks the fundamentals to really shine on the defensive area of the floor. Scouts will be watching to see if he can take the next step, from intriguing physical specimen to standout defensive player during his senior year.

One area where Hogue does shine, however, is on the boards. A testament to his athleticism and aggressiveness, he grabbed an impressive 10.2 rebounds per 40 minutes pace adjusted, a number that situates him in the top-10 among small forwards and in the upper half of post prospects in our database.

At the end of the day, Hogue's NBA prospects are very much to be determined. Like Iowa State combo forwards Melvin Ejim and Marquis Gilstrap before him, Hogue enters his senior year caught between positions with intriguing athleticism and offensive potential but a rudimentary perimeter game and being a little bit old for his class. Neither of Ejim nor Gilstrap was able to convince NBA scouts that they were capable of playing small forward in the NBA, but Hogue has momentum on his side after his stunning offensive display at Madison Square Garden in March. Building on his junior season, particularly as a perimeter shooter and on the defensive end of the floor, will go a long way in addressing doubts about his ability to play on the wing in the NBA. If he is able to convince scouts that his late season heroics were not a flash in the pan, then Hogue could see his stock rise dramatically during his senior season.
Read full article