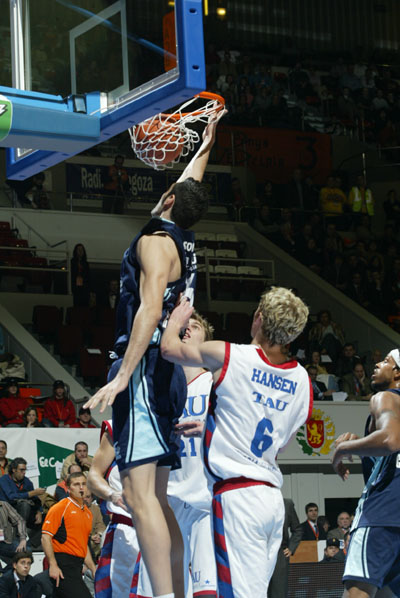 Strengths
Eduardo Hernandez-Sonseca is a true center, which is not the most common thing these days. He's a legit seven footer with a good wingspan and decent mobility. He has a nice frame, and has already put some strength on it.

Sonseca displays some of the skills that you would like to find in this kind of player. He can play in the post, displaying some decent moves and the ability to finish with a hook. He can also shot the ball with good range, even close to the international three-point line, although just from catch and shoot type situations.

On the defensive end is where he shines the most. He can be a very solid presence in the paint, using his size and intelligence whether on individual defense or team defense to intimidate the rivals near the basket. He enjoys decent leaping ability for a guy of his size, and good timing, which paired with his long arms make him potentially a very good shot blocker (indeed, he delivered a great season in this department some years ago).

Sonseca is an excellent rebounder. It's not that he's very aggressive when it comes to fighting for a rebound, but he combines his very accurate physical tools with a nice sense of positioning to amass a remarkable amount of boards in limited playing time.


Weaknesses
Perhaps what you can miss the most in Eduardo's game is more passion and aggressiveness on a regular basis. He relies too much on his size to get the job done (particularly on defense and rebounding), and while it can work up to a certain degree in Europe, it won't cut it in the NBA. His poor quickness and explosiveness doesn't help to improve the general impression you receive when watching him play. Indeed his blocking production has significantly gone down since three years ago, and this is bad news even if he risks less defensively right now.

He's still pretty raw when it comes to scoring. His jumper is very inconsistent and it's clear that his mechanics aren't perfect. This inconsistency is translated to the free-throw line too. Regarding his post-up game, it's not as effective as would be desired. His footwork is limited and his foot-speed poor. Besides, he shows some softness as well. He hasn't improved a bit in the recent years, and his visits to the low post are getting way too infrequent. This is an unforgivable trait for a player like him.

On defense, he's not consistent, nor aggressive enough. He particularly suffers when his defender takes him out of the paint, being easily beaten by quicker guys. Also, even if it's not too usual for him playing in Europe, he can be banged in the low post. Of course in the NBA it would be an issue to address, as he still could use a number of extra pounds, particularly for his upper body. He has the frame to absorb them, though.

Although he has the tools to be an effective big man, right now it doesn't seem like he will improve significantly enough to play at the next level. After playing extremely well in the 2001/02 season, injuries and lack of playing time set his development back. He doesn't seem to be a confident guy, or a fighter. So he barely has improved his game all those years. Even though, now that he's finally enjoying regular action, some advance in his game and skills is expected, but its been nothing too spectacular.


Competition
Sonseca grew up as a player in Real Madrid's youth teams. His debut in the senior team came in the 2001/02 season, and he delivered a major impact considering his level of performance in such a strong team while being only 18 years old. A little bit of luck was involved here, as the centers of the team, Tabak and Tarlac, were injured, so coach Scariolo decided to give the kid a chance, and he didn't disappoint, averaging 5.7 points, 4 rebounds and 1.7 blocks in less than 17 minutes per game in the Spanish ACB League. Those stats were virtually reproduced by Eduardo in the Euroleague, with 6.5 points, 4 rebounds and 1.3 blocks in 16 minutes per game.

The following season started in a similar way, and Sonseca was even selected to play for the senior National Team, enjoying a huge performance against Denmark with 17 points, 9 rebounds and 5 steals in a qualification game for the 2003 European Championships. But as the season advanced, the new Real Madrid coach Javier Imbroda lost confidence in him, and Eduardo saw his playing time shrink significantly. As the Euroleague's regular season was played only until February, he still managed to average 7.8 points, 4.9 rebounds and 1.5 blocks, but his averages went down in the ACB League to 4 points, 4 rebounds and 1.1 blocks.

Injuries came into play, making things even worse, to the point that the 2003/04 season was completely forgettable, with Sonseca managing to play only 86 minutes in the entire ACB league season.

With Real Madrid suffering its worst years in modern history, and therefore, having a great urgency to recover the winning path, there likely wasn't going to be any room for Sonseca to have chances this season, so the club loaned him to Gran Canaria, repeating the move that Unicaja Malaga made with Fran Vazquez, sending him to the Canary team the year before, and hoping to produce similar results.

So far we can talk about mixed results. Eduardo is usually playing as the first player off the bench on a good team. Gran Canaria, while not a top-tier club in Spain, has established itself as a very solid team that is fighting this season for its third consecutive playoff appearance, a huge accomplishment considering that six out of the eight playoff berths are almost always owned year in and year out by the same top teams in the country.

Sonseca has performed fairly well, showing that he can be useful for any team. But as the season has advanced, he seems to have lost some energy, motivation and willingness to play near the basket, affecting his production, which includes a nearly invisible performance in the recent King's Cup (see links). He has even lost one position in the rotation, now being the fourth paint player on the team. Currently, he's averaging in the ACB League 7 points, 6.5 rebounds and 1.5 blocks in nearly 19 minutes per game. In the ULEB Cup (a sort of Euroleague for the 2nd tier and 3rd tier teams of the continent), he hasn't shined at all, but still has averaged 8.1 points, 6 rebounds and 2.3 blocks in 20 minutes of playing time.


Outlook
A seven footer like Eduardo Hernandez-Sonseca always draws attention from the pros, so he may get some serious consideration in the second round. After all, somebody could think that the player will eventually turn into what he was promising three years ago. He is automatically eligible as an international player born in 1983.

Comments
Personally, I don't have much faith in Sonseca's chances to become an NBA-caliber player (at least, something more than a marginal player there). Even if he's physically gifted and enjoys some skills, he'll need more than that to reach that stage. I'm not sure he has the character to make it.

There's one significant detail about Sonseca. Checking his stats with the Spanish National Teams at different categories, you'll find a surprising regularity: he has never gotten major stats even in youth tournaments. He was averaging 4.5 points and 4 rebounds in the summer of 2001 for the National youth Team; a few months later, he was getting slightly better numbers for a powerhouse like Real Madrid; and after one year, he was repeating his performance for the senior Spanish National Team. It seems like its very difficult for him to dominate even if has the tools and opportunity to do so. Again, this is a question of character more than anything.

But we can extract another interesting possibility from it: Sonseca might be able to translate his low-profile contribution to the NBA level without losing significant efficiency, just as he has done previously in lower stages from the minor and youth categories to the top European level.

What seems too much of a long shot for him is to reach stardom, even in Europe.
Read full article

Luis Fernández
@DraftExpress
The name of Eduardo Hernandez-Sonseca has become very familiar in draft circles for a few years now. In the 2001/02 season, being just 18 years old, he was already playing meaningful minutes for Real Madrid, and looking like a promising player, getting a lot of hype in Spain and playing with the National Team. Injury problems and a lack of confidence from some coaches slowed him down (he doesn't seem to have a fighting spirit to easily overcome difficulties). So for this season, he has been loaned to Gran Canaria, where he's the first big man off the bench, and he's having a decent year.

But here in the King's Cup, he barely showed anything. If he hadn't taken the couple of mid-range jumpers that he missed, it would have been difficult to notice his presence on the court at all. The kid lacks fire and intensity, which is not the best recipe for games as competitive as these.

He can do better, of course. He's big, a legit seven footer, with a wingspan that allows him to grab a good number of rebounds. He has some mobility for his size and a nice frame. He used to be a fierce shot blocker, but not anymore (perhaps a lack of desire, or less defensive gambling, or maybe he's not the same athlete he was before his injuries). He can shoot the ball, but he's inconsistent, and he has some post moves, although not too polished. All in all, he's pretty much the same player he was three years ago minus the shot blocking production, and this can't be a good sign.

Just to make sure this is crystal clear: a guy with his size, wingspan, decent mobility and some skills is always intriguing, and he will likely receive consideration in the second round of the next year's draft, but he's a player I would never touch. His combination of quickness and skills is rather poor and I think he lacks character. Perhaps I'm being unfair, because he hadn't been playing regularly for two seasons, but he seems to me like the typical underachiever. Hopefully he can prove me wrong.
Read full article