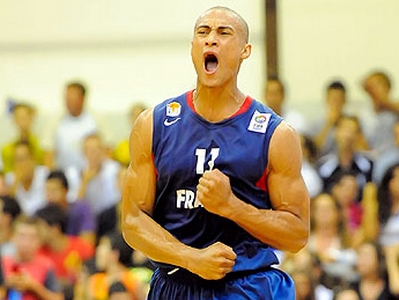 Bradley Thayer
@DraftExpress
Edwin Jackson of France was killing it on day three. In the All-star game he shot a perfect 7/7 including one three and some long twos, he got to the line after taking it strong to the rack, he finished well; he did it all. He netted 18 points, grabbed 4 boards and his defensive pressure on the other side of the court caused the other team to cough up 4 turnovers. On the day he shot 12/15, which for him and his generally suspect shot selection was a big plus. Don't think NBA teams didn't notice either. The brass of one Western conference playoff team sat down to interview him right after the game ended on the bench.

Jackson is a bit of an enigma in this draft, and has been for some time. On one hand he seemingly never fails to put up strong performances year after year in the EuroCamp, but on the other he still hasn't come close to breaking through during the regular season when things matter most. The French player is a great athlete with an NBA caliber frame, but is slightly undersized at just 6-3 in shoes and looks mostly content firing up pull-up jumpers. He's been a very streaky shooter throughout his career, which is a major issue, but always looks just on the verge of breaking through and developing into a very interesting player.
Read full article

DraftExpress
@DraftExpress
Although top-scoring for his team with 16 ppg, his performance was still somewhat inconsistent. He exploded offensively in three games, twice reaching 24 points and even scoring 32 in the gold medal game, which his team lost. Apart from these standout showings, he delivered several other solid games. It is fair to say that this French team had several other scoring alternatives and the plays werent set up for one specific go-to-guy. Overall he obtained excellent percentages (57% 2FGs, 46% 3FGs and 87% FTs) due to his usual good shot selection.

Jackson has quite a strong frame, enjoys good athleticism and decent quickness. Hes also a pretty reliable ball-handler who can slash to the basket. However his game lives and dies with his jump shot. Able to create his own shot or spot up on the catch and shoot, he has a really nice rhythm on his jumper with great lift. He doesnt usually create much for his teammates, even though he has really good awareness both on offense and defense.

On defense he always gives good intensity and tries to stay in front of his opponent, not getting stuck behind screens too often. Definitely a solid piece in this aspect. Something else still worth mentioning is the fact that he seems to emerge as the vocal leader in huddles.

As a specialist (outside shooter) he may have a remote chance of making the NBA, however his future may look more promising for Europe, where he could play at the highest level in due time.
Read full article

Mike Schmidt
@DraftExpress
A combo-guard with good physical attributes, Jackson was unlucky enough to be matched up on both ends with the incredible athleticism of John Wall. As a result, Jackson struggled despite some solid flashes, and probably looked like a more limited player than he actually is.

Jackson has the physical attributes to play in the NBA, with a strong body and a good first step. The French guard also displayed better point guard abilities than expected as well, finding the shooter after drawing the defense on the pick and roll a couple times, and also dropping the ball to the open big in the dunkers spot after penetrating into the paint. His handle was solid, but not quite good enough against the quick hands of John Wall at times, and a couple errant passes resulted from over-penetration into bad spots as well.

As a scorer, Jackson usually shoots the ball effectively, but missed both of his three point looks in this game. The guard's shot selection needs work, as he put up some contested mid-range shots that were enough to drive any coach crazy. He did show a very nice floater near the basket, and showed no fear attacking the basket against any player from the US Team.

Jackson's athleticism and upside makes him a somewhat intriguing long-term prospect, and he'll face very few guards as good defensively as John Wall. Returning to France for the next two seasons at least could do a great deal of good for him, especially if he can secure some major minutes playing point guard. If his game continues to mature, Edwin Jackson has the tools to develop into an NBA player.
Read full article

Mike Schmidt
@DraftExpress
Edwin Jackson is one of two French prospects in this game, and has really caught the eye of many scouts in the practices thus far. At first glance, you may think of immediately writing him off as an NBA prospect, because of his size (6'2" without shoes), and the fact he plays at his best off the ball. The young guard does have some very impressive tools however, and may have a chance despite a couple of major factors working against him.

Images of Leandro Barbosa pop into your head after watching him for a while, and for a number of reasons. The Frenchman has a good wingspan of 6'6", and shoots the ball with a similar trajectory as his Brazilian counterpart. He shows very good accuracy with his three point jumper, and his mid-range game strikes you as even more impressive. Whether it's the pull-up 18 footer off the dribble, or the floater from about 8 feet out, it seems that Jackson can really put the ball in the hoop comfortably from anywhere on the court.

Physically, he lacks size, but does have some very nice attributes in his favor. Jackson looks like he has spent a lot of time in the weight room, and weighed in at 195 pounds. He shows a very quick first step to the basket, and an explosive vertical leap to match it. The long arms combined with explosive leaping ability aide the young guard with the way he finishes at the rim. When he can't dunk the ball, he still shows very good patience in going up and finessing it in around the outstretched arms of the defense.

The one lingering question around Edwin Jackson seems to be the point guard question. On one hand, he appears to be exclusively a scoring guard, and judging from his shot-selection at various points during practice, he might be handcuffed to being a scorer his whole career. He does occasionally pull the ball out and call a play, however, and his court vision would be considered more than acceptable for a lead guard. It would be greatly beneficial for him to be in a situation where he had to develop his playmaking skills out of necessity, and the athletic full-court defense of Team USA might give him a chance to show more in that regard. International guards usually struggle against the pressure of the athletic Americans in this setting, and Jackson is by far the most athletic guard on this team. This may provide the perfect look at where he stands as a point guard (if anywhere), and in turn an NBA prospect.
Read full article

U-18 European Championship: The Wings

Luis Fernández
@DraftExpress
This was a rather streaky showing by Edwin Jackson, pretty much in line with what we've come to expect from this player. But still, the great performances outnumbered the poor ones, providing him a spot on the all-tournament team. Finishing as the fifth best scorer in the championship, Jackson delivered five games where he scored over 20 points, while being unable to reach double digits in the remaining three. When hes on fire, its really difficult to stop him, but he doesnt always find the rhythm.

In spite of being the clear-cut scoring leader for France, Jackson failed to emerge as a go-to player. He was not a go-to guy in style: hes not particularly creative, and when he creates, its for himself, even if he fared a bit better in this championship when it came to passing the ball (1.8 assists per game, quite a nice amount for him). He was neither a go-to guy when his team needed him to be, as he usually disappeared down the stretch in the most important games. A good example was the do-or-die thriller against Greece. Despite delivering a terrific scoring performance with 28 points on 12/17 shooting, he provided his last points with three and a half minutes to go in the fourth quarter (actually his only points in the last five minutes of the game). In the end, hes a bit of a role player, a shooter, a scorer, still not a leader, and not a consistent reference on the court.

Focusing on his game, well rely in what we already discussed in the U-19 World Championship reports. But for the sake of providing a brief picture here, well summarize. Hes an undersized shooting guard, quite strong, athletic, with very good legs, who primarily lives off his jumper. Pretty much a pure finisher, he can deliver his jumper off the dribble (using crossovers to unbalance his defender), off screens, in spot-up fashion, almost in any way he can figure out. He has a great ability to balance himself in the air for the release. Pretty one-dimensional, he can slash towards the basket and isnt afraid of contact, but its not a pattern in his game. Solid on defense, hes not your typical scorer that only plays on one side of the court.

In the end, a guy with his shooting touch and solid athleticism should find himself a place in the basketball elite.
Read full article

Luis Fernández
@DraftExpress
One of the best shooters in the tournament, Jackson emerged as the scoring leader on this very strong French team, despite being one year younger than most of his teammates. Actually, just two years ago he was a marginal player on the French U-16 squad, then a talented but wild guard who didn't please his coach at all with his performances on the court. More mature now, having gained great consistency in his shooting stroke, Jackson makes a living off his shooting skills.

This undersized, yet athletic shooting guard possesses superb ability to release jumpers. While displaying very nice elevation in his leaping effort, he shows perfect timing to elevate and catch his opponent unbalanced. He often uses crossover dribbles where he gains a lot of space if his defender is not properly alert. Obviously, we can say that he can create his own shot on a regular basis, but he also is active searching for open looks to shoot off cutters, or just in static fashion.

As intriguing as his shooting stroke is, Jackson's performance in Novi Sad also exposed his lack of creativity team-wise. He was somewhat of a black hole on the offensive end, a productive black hole at that, but a much less creative force than you would have liked in a guard. Actually, the fact that he was the premier scorer on the French team perhaps wasn't a good sign about their playing level and the ability of other teammates to step up and take responsibilities.

Even if a very one-dimensional player, he's still very interesting, and he plays some nice defense too, taking advantage of his quickness and well-built body.
Read full article