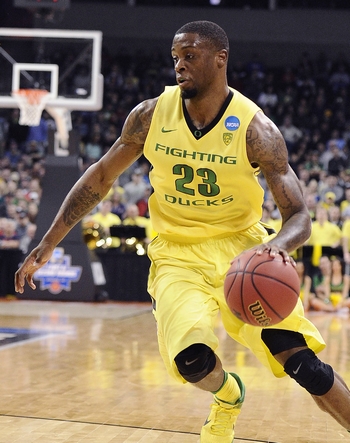 Few players benefitted from their team's success during the college season as much as Oregon forward Elgin Cook. As the Ducks continued to gain more and more national recognition, the former JUCO freshman turned two-year Oregon starter was able to show his potential NBA worth on a national stage.

Cook's role in Oregon's Elite Eight season coupled with his impressive physical profile earned him a spot at the Portsmouth Invitational, where he found some success playing more on the wing  with a 21.7 PER in three games  after spending most of his time at Oregon as a power forward in the Ducks' small lineup.

A lot of Cook's intrigue as an NBA prospect is centered around his physical profile. While not overly tall for a wing (or even small-ball four, which is more fitting for his skill set) at 6'6, Cook has a chiseled 212-pound frame and very good length with a 6' 10.5 wingspan. Above all, Cook is an impressive, versatile athlete with great open court speed, an explosive first step, and good leaping ability off of his left foot, right foot, or both feet. He regularly takes off well outside the charge circle and glides to the rim mid-air. Cook, who scored 1.14 points per possession in transition as a senior, also has some agility, as he's able to mix in euro steps with regularity. His combination of athleticism and physical tools gives him quite a bit of potential on the defensive side as well.

Cook's overall offensive game is still a bit of a mixed bag at age 23. Playing mostly the four for the Ducks, Cook found most of his success as a straight line driver, coupling his strong first step and aggressive nature to slash to the rim while earning 6.9 free throw attempts per 40 minutes. Oregon would regularly isolate (14.3% of his offense) Cook from the top of the key or elbows, taking advantage of his superior quickness with typically slower-footed forwards defending.

Cook is a successful straight-line slasher (driving both right and left) who even mixes in slight hesitations and basic crossovers at times. As a half-court scorer, however, he's fairly limited due to his shooting struggles and basic handle. As a shooter, Cook is certainly trending in the right direction having made 21-of-62 threes (33.9%) as a senior after making only 7-of-33 in his first two seasons. With that said, Cook does most of his damage from mid-range spots, lacks traditional mechanics with a low release point and fairly stiff lower body, and has yet to prove that he can be a threat from the perimeter with any consistency. He did shoot 78% from the line as a senior, and gets pretty good rotation given his mechanics. He also started to knock down more and more rhythm pull ups as the year went on, but Cook's shooting is without a doubt his biggest question mark and hurdle to carving out a NBA role moving forward.

Cook will also have to make the transition to being defended by wings rather than college fours, which will test his ball-handling skills more than anything. His handle is very basic and somewhat loose versus pressure. Without significant improvement, Cook isn't going to be much of a shot-creator in the half-court at the pro level, at least as long as he's playing the wing.

The Milwaukee, Wisconsin native did make strides as a playmaker, taking advantage of Oregon's high-powered offense (number one offensive rating in the Pac-12) to average a career-high 3.0 assists per 40 minutes. Cook is at his best driving and kicking, and showed more unselfishness as a senior than he had in the past. With that said, Cook certainly has a tendency to be wild going to the rim. He doesn't always adjust to the help defense well, and regularly forces up tough shots in the paint, supported by his ho-hum 50% at-the-rim clip, despite his physical gifts. He also settles for long, contested twos regularly and can do a better job of slowing down in the half court.

Overall Cook's main offensive value is as a straight-line slasher who can finish above the rim and through contact. Continuing to improve his jumper, handle and decision-making will be key in maximizing his role player potential on the offensive end.

Clearly the most intriguing part of Cook's potential NBA fit revolves around his potential as a multi-positional defender. He's strong and long with quick feet, a high motor and good recovery speed. Although slightly on his heels at times, Cook is able to keep both guards and wings in front due to his fast-twitch athleticism. He's competitive and has the length to bother jumper shooters, even if he's knocked off balance by the initial move. With a glut of like-sized defenders at Dana Altman's disposal, Oregon played both zone and a switch-heavy man, which gave Cook a lot of experience defending all types of players  a skill that's coveted in today's NBA. Cook isn't perfect defensively, as he can be a bit jumpy and lose focus off the ball at times, but he competes and has physical tools that NBA scouts travel around the world to try and find.

Cook most certainly isn't the most skilled prospect, and at age 23 he isn't exactly loaded with long-term upside. Improving his shooting range is going to go a long way in dictating Cook's NBA future, but all in all wings with size, length, athleticism and competitiveness who can defend don't grow on trees.

If Cook is able to shoot the ball well during workouts while putting his explosiveness and defensive prowess on display, he could very well work his way into the second round. Even if he doesn't, making a team as an undrafted free agent or out of the D-League and playing a K.J. McDaniels-type of role is also a realistic possibility.
Read full article

DraftExpress
@DraftExpress
-Oregon wing Elgin Cook has decent height for the wing at 6'5 without shoes, but his strong 212 pound frame and 6'10 ½ wingspan indicates he has multi-positional potential defensively considering how athletic and aggressive he is. Cook did a little bit of everything at the PIT, averaging 14 points in 25 minutes, while nabbing 2.3 steals and shooting 62% for 2. The biggest key for Cook in the draft process will be his ability to convince NBA teams he has better potential as a shooter than he displayed at Oregon (career 29% 3P%). He shot just 2/8 for 3 in Virginia.
Read full article