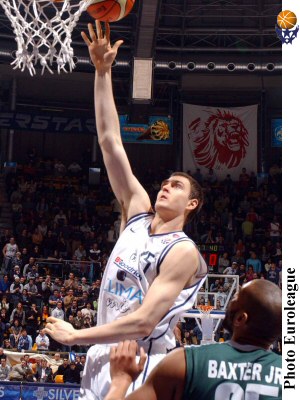 Euroleague: Youngsters Fighting for a Place Under the Sun

Matiz Tratar
@DraftExpress
Quietly and slowly, talented big man Erazem Lorbek is living up to the expectations he had created for himself at the junior level (at least up to a certain degree). Considering his performances over these last few months, very few people think that he won't become at least an important player in Europe now.

This season Lorbek has added some aggressiveness to his game, which allows him to live a better life inside the paint as a big man. As a result, his rebounding production has improved, his defense is more reliable, and he feels more comfortable when it comes to using his excellent various offensive skills, even shooting treys more frequently, although he might rely too much on jumpers to score sometimes.

But it doesn't end there. With Matjas Smodis (Bologna's main offensive reference inside the paint) sidelined since mid January, he has taken a big step forward, assuming the leading scoring role of his team's frontcourt. Indeed, in the last three games he has averaged 15 points, 7.7 rebounds, 1.7 assists, 1.7 steals and 2 blocks; although we have to consider that the importance of those games for the competition was rather limited.

While Bologna's GM Zoran Savic should be celebrating having bet on Lorbek when the Slovenian ran away from Michigan State, the way back to the States for Erazem still doesn't look crystal clear. His quickness remains the biggest concern about his game, and you have to wonder how well he would be able to translate his skills to the NBA level with that flaw.
Read full article

Strengths
Erazem Lorbek is a super-skilled player who, offensively, can do it all. It's very hard to find 6-10 men like him with such a repertoire of abilities and solid fundamentals. Where do we start? Lorbek can shoot the ball from anywhere on the court on a good percentage. Unlike the majority of power forwards, he has a reliable jump shot off the dribble. You can see him often put the ball on the floor and take it to the basket. If his matchup overreacts, he'll step back and make him pay with a midrange fade away jumper. Speaking of dribbling, Lorbek has nice handles with both hands. He can use them in transition, as he runs the court decently. Also when penetrating, where he can beat his opponent by faking his shot. One of Erazem's most positive attributes is his post game. He has good footwork and knows how to use his body to take full advantage of his skills. A very nice soft touch around the basket completes the package. Lorbek sees the court very well, and always passes to the right man. He can attract defenses and then find the open man with a nice dish. He's a better passer facing the basket then from the post. The pick and roll comes naturally to him. He usually makes the right decision. Fully understands the game. He has great basketball IQ. A clutch player and loves big games, so you won't see him afraid of taking responsibilities. He's very competitive.

Weaknesses
Lorbek's main limitation to play successfully in the NBA is his foot speed, really poor even for a player that tall. As good as he is, he will have trouble scoring against athletic matchups. Defensively it gets even worse. Given the amount of quick power forwards in the NBA, his effectiveness is at best doubtful. Besides, Erazem is a soft player. He doesn't like contact. You won't see him fighting in the muddy waters of the paint. On the contrary, you might see him grabbing a rebound in traffic in the middle of the paint and stepping out to dribble instead of going towards the rim and looking for the basket. The fact is that during his season with the Spartans, he focused more on his perimeter game, losing some versatility that he had showed before. It looks like the physical game played in college didn't fit too well with his lack of aggressiveness and strength. Those limitations, along with his average vertical jump, keep him far away from being a rebounding or blocking force in the league. Considering his poor athletic attributes, he should try to get stronger in order to make everyone take notice of him in the paint. Playing professionally in Italy has already showed the devastating effects that his slowness and softness has on his game. Most of his offensive virtues are gone as he can't keep up physically with his contenders, and his defense, especially his team defense, suffers noticeably. With that said, we should consider that the kid is still very young and there is room for improvement and adjustment. He will never be an athletic player, but with the proper work he could acquire better conditioning, and learn how to overcome his major weaknesses. All of his weaknesses have already been exposed in his lacklustre year in college. It is not clear what he was thinking when he decided to enter the draft last year.

Competition
After a very good season with Olympia Ljubljana's second team, Erazem brightest moment in the basketball world took place at the European Junior Championships of 2002, where he lead his team throughout the tournament, and took over the semi-finals with a very clutch performance. In the final, in spite of his 32 points effort, Slovenia lost against Croatia. The following season, with the Spartans, after a quiet year, he stood out during the NCAA tournament, having a major impact on several games, averaging 12 points and 5 rebounds in the tournament, which is almost double what he averaged during the season. Very surprisingly, he left Michigan State after his freshman year and went to Italy, where he plays with Skipper Bologna, a European powerhouse, not enjoying too many minutes of playing time though. Lorbek did not talk to Michigan State's legendary coach, Tom Izzo about this. He just hired an agent, entered the NBA draft and left. When he realized that the chances of being drafted in the first round are miniscule, he took his name out and went to Europe.

Outlook
If Lorbek decides to throw his name in the 2004 draft, he will probably be second round material (mid to late, to be more precise). He's not ready at all, but some team will take a chance on him just to leave him in Europe hoping that he develops into a NBA level player. Of course, the intelligent choice for him would be to wait a little longer, to improve and gain experience in Europe and to declare in a year of two, perhaps with some chance of making the first round (not likely though).

Comments
Lorbek was a top prospect in Europe a few years ago. Back then, his softness and physical liabilities weren't so noticeable, basically because of the competition level. Besides, you could expect him to develop his game as the competition level he was facing increased, but that still hasn't happened. Will he be able to overcome his weaknesses enough to play at NBA level? It's difficult, but I wouldn't rule it out. Indeed, I would use a low second round pick on him any day.

Facts
Earned MVP honours at the European Junior Championship of 2002, when he became one of the hottest prospects in all of Europe.
Read full article