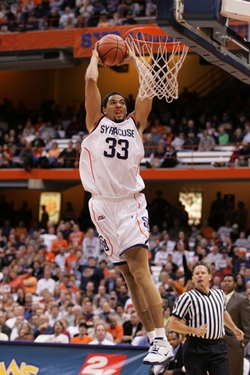 Joseph Treutlein
@DraftExpress
Terrence Roberts]After a slow start to his debut campaign in the Big East, Devendorf played just as good as any freshman in the country for the second half of the season. He showed Orangemen fans why he was a consensus top 25 prospect and McDonalds All American coming out of high school with his crafty play and deadly outside shooting, helping lead SU to the finals of the Big East Tournament.

The sophomore combo guard will surely be one of the better guards in the Big East this season, owning a package of skills that not many in the conference can match. Although he primarily played shooting guard last season, he showed above average ball handling ability and the penetration skills to create for others at ease. Eric is deceivingly quick off of the dribble, and had no problem breaking down opposing guards all throughout his freshman campaign. What makes him even more special however, is his ability to finish in the lane amongst much taller defenders, especially going left. It is quite odd that Devendorf favors his left hand so much, considering that he is a right handed player. He prefers to drive left the majority of the time, primarily finishing with crafty left handed lay-ups or floaters in the lane, in almost ambidextrous manner. It certainly would not be a bold statement to say that Devendorf uses his opposite hand better than any other guard in the country right now.

As far as shooting is concerned, the Oak Hill Academy product gives you just about everything you could ask for. He has a quick release, crisp form, and nice lift on his jumpshot, while possessing NBA three point range. It does not stop there however, as Eric has a beautiful mid range jumper off the dribble in his arsenal, although he does not go to it much, in favor of taking the ball all the way to the rim.

There are some weaknesses to the Michigan natives offensive game, however. His primary weakness has to be his poor decision making skills, which explains his 1.03/1 assist to turnover ratio. Devendorf has good vision and playmaking abilities, but he has a tendency to throw bad passes too often, or throw the right pass, either too early or too late.

Devendorf cant be considered a great athlete, owning just decent quickness and leaping ability. He does however use his body extremely well in the lane, allowing him to finish in traffic. His average foot speed and length certainly do not help the fact that he is already undersized for a shooting guard prospect. The Orangemen guard is pretty underdeveloped physically as well, and doesnt seem to own a frame capable of packing on much more weight.

Defensively, Devendorf is hidden within Syracuses illustrious zone defense. Paying close attention though, one will easily notice his inability to contain opposing guards penetration, which essentially collapses the zone every single time. He seems to have a lack of consistent effort on the defensive end, and should consider himself lucky that his inadequacies are hidden within Syracuses defensive scheme.

Devendorfs NBA potential is tough to project at the moment, considering he hasnt really solidified himself in either guard position. If he is able to develop into a full time 64 combo guard, capable of playing either position at the next level, it is certainly not out of the realm of possibility to see him land in the first round. However, even if Eric only improves marginally over the next three years, we will still most likely see him get drafted somewhere in the second round eventually, due to his outside shooting capabilities and his ability to create off the dribble, as well as his pedigree playing under Jim Boeheim at Syrcause.
Read full article

Eric Weiss
@DraftExpress
Playing off the ball throughout his freshman season, Devendorf has been a valuable piece for the Orangemen. He has a nice shooting stroke from the outside, and his ball handling skills allow him to penetrate to the basket. Though his decision making is sometimes suspect, Devendorf does possess point guard skills, and is expected to take over the position at some point in the future.

In the NCAA tournament, Devendorf will have to be a consistent scoring threat for the Orangemen, and cut down on his mistakes. He will need to play like an upper-classman if his team wants to make a run in the tournament. Eric could also help himself by showing an improvement on the defensive side of the ball. Devendorf is a very confident player, but he will probably need 3-4 years of college to prove that he can effectively play the point guard position.
Read full article