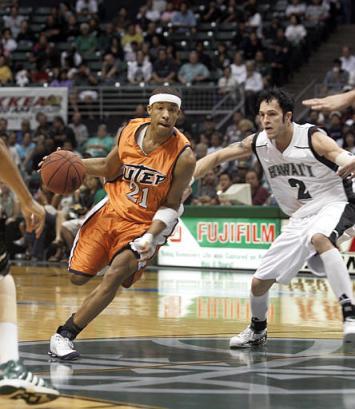 Landry Fields
@DraftExpress
Fili Rivera is another guy who is flying under most radars due to the fact that he isnt being shoved down our throats on a weekly basis by the national media. He is one of the purest point guards you will find anywhere in the NCAA, but he can also score and play some defense, which makes him that much more attractive to the many NBA scouts who have come to visit him this year in El Paso. This week, Rivera was responsible for probably the most impressive point line we have seen all year in the NCAA. In a game against Paul Millsaps Louisiana Tech squad, Rivera shattered two assist records, one of them held by none other than legendary UTEP guard Tim Hardaway. The first record was the school's all-time record for assists in a single game, which he destroyed by putting up 18. The second was UTEP's all-time record for assists in a season, which he now holds with 193 and counting. Whats most impressive about the 18 assists Rivera dished out was the fact that he did it without committing even a single turnover.

In terms of the NBA, Rivera isnt being overlooked by anyone, as almost every team in the league has scouted him this season already, some of them more than once. He regularly draws 5-10 NBA scouts every time he steps on the floor for a good matchup. His outside shooting is something that he has been criticized for in the past, but on the year the kid is shooting a very solid 39% from behind the arc, while shooting 45% from the field and over 81% from the line. He does have to improve his outside shooting to really stick as a backup point guard in the League, much like fellow Puerto Rican Carlos Arroyo did coming out of college. Rivera has made his presence felt very well on the NCAA level, even if you havent heard of him yet.

His UTEP team is on the bubble for the tournament, but hopefully for him and fellow senior stud Omar Thomas, along with the rest of the talented Miners squad, they will be able to pick up some good wins and work their way into the dance, so the rest of the nation can see what theyve been missing out on all year. Rivera hasnt decided whether to commit to Portsmouth (NBA draft camp for seniors) yet, as he is hoping that a good showing afterwards in Chicago will be enough. There are so many great point guards in this draft that his stock is really all over the place, but hes got as good of a shot as any of the 2nd round points in our mock of getting drafted and sticking with an NBA team.
Read full article