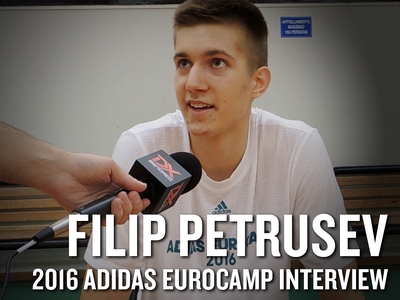 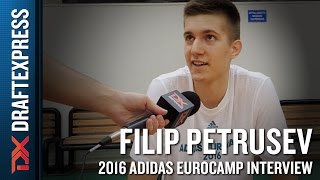 Matt Williams
@DraftExpress
Among the most intriguing newcomers to the UAA circuit this season is Serbian standout Filip Petrusev who had a standout performance playing up at the U18 Spanish Clubs Championship with Vitoria and at the 2016 Eurocamp as part of the Next Generation showcase least summer before enrolling at Avon Old Farms (CT) this season. Standing 7'0 in shoes with a 7'0 wingspan and 225-pound frame, Petrusev has grown a bit from last summer. A gifted offensive player who can make shots with range and put the ball on the floor surprisingly well for his size while also possessing good defensive instincts, the Belgrade native has burst onto the recruiting scene with his strong play this spring. He figures to have similar dimensions to Frank Kaminsky who measured 7'1 in shoes with a 6'11 wingspan and 231-pound frame if he continues to grow, which isn't out of the question at this stage.
Read full article

Serbian big man Filip Petrusev proved to be one of the most polished and offensively talented players on either roster, as he scored 20 points on 8-of-14 shooting in only 19.5 minutes of action. Petrusev, who signed with Spanish club Laboral Kutxa as a 14-year old, has impressive natural size at 6' 9 to go along with long arms and a strong, proportionate frame that still has plenty of room to develop.

The Belgrade native is mobile, although not fast-twitch or overly vertically explosive, with an impressive offensive skill set for his age. Petrusev scored with his back to the basket on multiple occasions, using his body well versus contact and employing quick spins to beat his defender before finishing with soft touch around the rim. His touch also translates to mid-range spots, where he has very sound mechanics and is quite reliable. Petrusev does step out and shoot threes at times (1-of-3 on Saturday) and that will likely be a weapon in time, but he's at his best inside the arc at this stage of his development. He uses his frame to carve out space on the offensive glass and possesses sharp instincts and good timing going after boards. In addition to his scoring touch, crisp footwork in the post, and work on the offensive glass, Petrusev, who DraftExpress evaluated at the 2016 Jordan Brand Classic, possesses a solid feel for the game for a 16-year-old big as he plays with poise and keeps the ball moving.

Like most bigs, Petrusev has room to grow as a defender and defensive rebounder. He's not the most explosive leaper and doesn't protect the rim with natural instincts, nor does he step away from the rim and defend all that comfortably at this stage. With that said, Petrusev figures to improve in those areas as he continues to gain more experience and grow into his body. Overall Petrusev is an intriguing prospect with a nice blend of physical tools, offensive skills, and feel for the game, even though his upside might not be off the charts.
Read full article