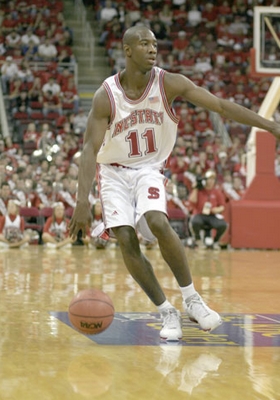 Joseph Treutlein
@DraftExpress
Ranked as the 9th best prospect in the ACC last year in this very same column, Grant has slipped a few spots this time around despite upping his averages to nearly 15 points per game (from 8.3) between his sophomore and junior seasons. Grant is clearly developing into a real go-to scoring threat at the collegiate level, but is also seriously exposing his flaws as a prospect in the process.

Watching him on tape, its not difficult to see why Gavin Grant was considered an intriguing prospect to begin with. Standing 6-8, he has a nice frame, solid length, and very nice athletic ability. His first step is quick and powerful, and he has no problem getting into the paint and finishing above the rim if given the opportunity to do so. He is an excellent ball-handler, capable of pulling up off the dribble from mid-range, and can go either way equally well. N.C. State would use him as both an extra ball-handler to help break the press (and sometimes as a real point-forward), or in the paint as a post-up threat, where he shows decent footwork on occasion backing down smaller guards. There really arent that many 6-8 players with his versatility in the college game.

With that said, Grant got exposed to a certain extent because of how heavily N.C. State relied on him to create offense for them. He averaged 4.2 turnovers per gameranking him first in the country amongst draft prospects in that category, while also shooting just 31% from behind the arc. His shot-selection is poor, and he often looked very much out of control, putting the ball on the floor wildly on his way to the rimregularly leading to an offensive foul. He also had too many unforced errors caused by mental lapsesthrowing balls away carelessly for example, or not executing his role within N.C. States offense.

To really maximize his chances as a draft prospect, Grant must tighten up his shooting mechanics. He has an inconsistent release point on his jumperusually shooting it on the way down off a small bunny hop. This can be fixed, but it will take a good amount of work to really get down pat.

Grant would also be well served to work on his perimeter defense. He doesnt seem to put all that much effort into this part of his game, giving his man way too much space, letting players blow past him way too easily, and gambling excessively for steals. He does not seem to have great fundamentals in this area, although the physical tools are there and then some. This is a part of his game he has to work on if hes to make and stick in the NBA.

Regardless, expect to hear the name Gavin Grant mentioned frequently leading all the way into the draft process. Hell have every opportunity to showcase his credentials as an NBA player as a top scoring option for N.C. State, and then in the pre-draft camps, which hell likely be a part of.
Read full article

Wojciech Malinowski
@DraftExpress
Another player that might be considered a bit of a surprise to see this early on the list, Gavin Grant is definitely a potential breakout candidate to look out for. Hell be expected to shoulder a great deal of NC States offense this year, and will have every opportunity in the world to show his talent. Breaking down tape of his from last year, there is no doubt that he certainly flashed terrific signs of promise from time to time. The only question now is; can he do it on a consistent basis?

Were talking about a player with excellent tools to get the job done. He has good size, an excellent frame, a nice wingspan, and solid athleticism. Being a pretty quick player, hes very hard to stop once he gets an initial step on his defender. Although hes not incredibly explosive on his initial move, he is able to overpower his way into the lane with a terrific 2nd and 3rd step. Like most New York City guards, Grant is a very talented ball-handler, being able to create his own shot going either left or right and having the toughness and aggressiveness to continue to attack the basket strong time after time. He finishes with purpose around the hoop, showing nice creativity and using the glass well when given the opportunity to do so.

As an outside shooter is where Grant struggled the most as a sophomore, which made him a really poor fit in Herb Sendeks Princeton-type Offense. His shooting mechanics looked very poor, showing a slow and deliberate release and little to no elevation on his jumper. He also rarely would show signs of a capable mid-range game, being a bit one-dimensional in the fact that he either settled for a low percentage shot with his feet set or took the ball strong to the hoop with a full head of steam. There are some question marks about just how committed Grant is to making everyone around him better, as he is a bit too stubborn with the way he forces the issue at times, and appears to have fairly average court vision in terms of creating shots for others.

Defensively, Grant has nice tools, but hes yet to show a consistent commitment in terms of his intensity and awareness to stay in front of his man.

This season could go many different ways for NC State, but they will regardless need Grant at his absolute best. He has an opportunity to be one of the top scorers in the conference if he lives up to his potential, and therefore a real chance to really up his draft stock in the process.
Read full article