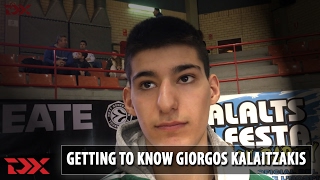 Strengths
-Thin, but wide-shouldered, long-armed guard  6' 6 with a 6' 10 wingspan.
-Fluid with crisp footwork. Can change speeds and directions.
-Very creative combo guard who can score and facilitate in a variety of ways  20.7 points per 40.
-Comfortable getting to his pull up jumper with hang dribbles. Creates space with step backs going right or left. Will pull up from deep out of ball screens. Extremely streaky shooter but finished the tournament 8-of-19 from three (42.1%). Very advanced getting to his pull up for a player his age.
-Likes to operate from the mid-post. Wants to create space with jab steps and shoot over the top.
-Has floaters in the paint
-Can really pass when he wants to. Whips one handed passes (either hand) over the top of the defense. Will move it ahead in transition. Had a very weak supporting cast so wasn't asked to facilitate as much and it showed in his numbers. Able to play on the ball because of his pull up game and passing ability.
-Very instinctual on the defensive end. Not very physical or hard-playing but has really quick hands and long arms. 4.6 steals per 40 minutes.

Weaknesses
-Thin with somewhat wide hips. Lack of strength really limits him around the rim as a finisher  two free throw attempts in 89 minutes  and as a defender. Not a physical guy.
-Average athlete. Can change speeds but doesn't have a ton of zip with the ball. Plays below the rim. Struggles to get all the way there in the half court, leading to a lot of contested pull ups.
-Partially a function of his role but his shot selection leaves much to be desired. Will jack up deep threes early in the clock. Very turnover prone  flash over substance at times. 6.9 turnovers per 40 minutes.
-Streaky shooter. Shoots it really flat. Ball doesn't always come out smoothly. Percentages in this three game sample proved better than his actual stroke.
-Poor defensive effort. Stands straight up and down. Makes no effort to contain the ball. Walks back on defense. Missed the last couple of days with an illness, which could have played a part, but still very underwhelming on that end.
-Gives you almost nothing when he's off the ball. Not an active cutter. Doesn't want to shoot spot jumpers, would rather take isolation pull ups. Needs to be in a system where he's given the keys and able to play strictly on the ball.

Outlook
Kalaitzakis, whose twin brother plays for Aris, really shined early in the tournament, turning heads with his tough pull up jumpers, shot creation and passing ability when called upon. He's creative and instinctual, and clearly watches the NBA game (likely the Warriors), evident by his deep pull ups, one-handed passes and up-tempo style of play. His effectiveness waned as the tournament went on, however, as his low percentage pull up jumpers stopped falling and his lack of a supporting cast doomed Panithinaikos. Kalaitzakis has a lot of talent and cemented himself as one of the more interesting guard prospects in L'Hospitalet, even if he comes with very little defensive intensity and a streaky jumper. It will be interesting to watch his development from afar as situation will likely play a big role in what type of player her turns into. If he's given the keys and can keep working to develop into more of a lead guard, he becomes very interesting from an NBA perspective.