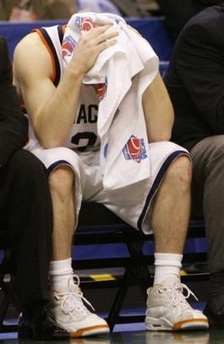 Eric Weiss
@DraftExpress
After a terrific game yesterday, McNamara is showing his inconsistency today that has led him to have to play in the pre-draft camp in the first place. He split minutes with Blalock and Stinson at the point, but did a very good job running the offense when he did have the ball in his hands, making nice decisions in both the half-court and in transition and finding the open man unselfishly more than he did yesterday. The drive and dish has worked for him well on a number of occasions. Poor shot selection has plagued him today, as well as terrible work on the defensive end trying to defend Jordan Farmar, who he just could not stay in front of. In the 2nd half we saw more of the same; a very tough three moving right while falling away that rimmed out, being blown by time after time by Farmar, and finally an open 3-pointer with his feet set that fell for him.
Read full article

Strengths
A natural born winner, McNamara might be the accomplished NCAA player in this years draft. His clutch shooting and scoring made him a household name over the past four seasons. His shooting mechanics, quick release, deep range and the elevation he gets on his shot are all top notch, being able to knock down shots either with his feet set or off the dribble. From the free throw line, he shot an excellent 90%. As a passer, McNamara had a career high 6 assists per game with a fairly solid 1.77/1 assist to turnover ratio. He is smart and unselfish, understanding how to utilize his teammates, particularly when passing on the move. His intangibles are superb and hes learned how to make the most of his ability despite his seemingly average physical attributes, possessing great toughness and leadership ability.

Weaknesses
McNamara has many key flaws to his game that have proven to be insurmountable for other superb college players in the past. His size and overall bulk are below average, as is his overall athletic ability. McNamara noticeably lacks quickness and explosiveness, and already struggles creating his own shot against top notch defenders. This shows up on the other end of the floor as well, where his lack of lateral quickness could make him a liability in the NBA. McNamara is not a pure point guard either. His shot selection can be very poor as evidenced by his 35% shooting from the field as a senior. For someone with such a great reputation as a perimeter shooter, the 33% he shot from behind the arc this past season does not exactly back that up.

Outlook
One of the most visible players in the NCAA over the past four years, McNamara had an extraordinary college career, with an NCAA Tournament Championship, a Big East Conference Tournament Championship, and four NCAA Tournament appearances under his belt. Despite his college resume, McNamara is by no means a lock to get drafted. He will need a solid showing at the pre-draft camp to have a real chance, but could benefit from not having to dominate the ball in the NBA as much as he did at Syracuse.
Read full article

Joseph Treutlein
@DraftExpress
After heroically leading Syracuse through the Big East tournament, McNamara had an incredibly disappointing performance against Texas A&M that saw him not even make a field goal throughout the entire game. This is the 2nd year in a row that McNamara saves the worst performance of his season for his very last game.

In this one he struggled to get the ball up the court against the pressure defense from Acie Law and Dominique Kirk, and often had to give the ball up to somebody else in order to get it across the half court line. McNamara had a few nice passes that resulted in assists, but for every nice pass there was a forced pass into traffic resulting in a turnover.

McNamara appears to lack the first step needed to get by more athletic defenders in half-court situations, a problem that has arisen on many occasions this year for Syracuse. Despite his reputation for being one of the top shooters in all of college basketball, his 34% 3-point percentage doesn't back that up. McNamaras best redeeming quality throughout his college career has been his clutch ability, but against A&M, he was not able to put his team in a position to use this ability, and he sat on the bench during crunch time.

McNamara showed tonight why there are still some very serious doubts about his NBA potential once you get past the sentimental value of the moments hes been a part of in college basketball over the past 4 years. He still has his work cut out for him, likely starting at Portsmouth, to ensure himself of being drafted.
Read full article