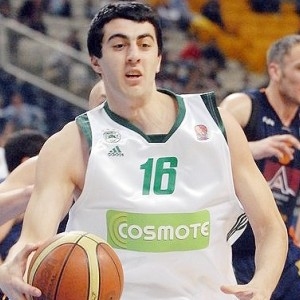 The last time we wrote about Giorgi Shermadini, he was an early entry candidate for 2008 NBA draft fresh off a solid showing at the 2008 EuroCamp. Having played in his native Georgia until that point, Shermadini withdrew his name from the draft and signed with Greek power Panathinaikos later that fall. Seeing limited action in two seasons in Athens, he was loaned to fellow Euroleague participant Union Olimpija Ljubljana for the 2010-11 season.

Seeing his first consistent playing time since leaving his home country, Shermadini has re-emerged as a substantial NBA prospect. Standing somewhere in the ball-park of 7'0 tall and possessing a somewhat problematic 250-pound that would benefit immensely from some added muscle, Shermadini is a fairly mobile big man for his size. He runs the floor somewhat awkwardly, but can get off his feet to challenge shots and finish above the rim.

According to Synergy Sports Technology, a little more than 50% of Shermadini's touches from cuts, roll man situations, and put-backs. Showing a terrific effort level around the paint, Shermadini's size and deft touch allowed him to convert those opportunities at a tremendous 70% rate last season. Shermadini lacks upper body strength, brings the ball down too low at times after the catch, and does not always finish through contact effectively, but he does a tremendous job maintaining spacing, setting screens, filling lanes, staying with the play, and actively pursuing the ball off the rim.

In the post, Shermadini relies on his ability to carve out position to score. Though he is not a heavily utilized part of Olimpija's offensive attack, he sees the ball at a pretty consistent rate down low. Able to carve out space on the block against smaller players, Shermadini's size makes him a good target for lob passes, and he has a basic post-game. He struggles with turnovers against stronger, more physical players, but he doesn't hurt his team by forcing difficult shots down low.

Away from the basket, Shermadini has shown the ability to knock down perimeter shots in limited touches. Similar to his approach in the post, Shermadini is not overly assertive, taking most of his shots when he's wide open and showing range all the way out to a step inside the three-point arc. He knocks down his free throws at a good rate, and while he won't be relied on to stretch the floor should he play in the NBA, he could develop the consistency to not have to sit on the block if he's paired with a very capable post-up four.

Considering the small role he played for Olimpija and the similarly small role he'd likely play in the NBA long-term, Shermadini's biggest weakness is his turnover rate. Struggling to hang onto the ball in traffic, the Georgian center needs to get stronger and be more decisive in the paint.

Defensively, Shermadini really struggles against stronger back to the basket players, but not for lack of trying. He shows a good activity level and is a smart team defender. He's very foul prone at this point, as his main weakness is his inability to keep his man from getting a foot in the paint on the catch.

Similar to Hanga, Shermadini is an intriguing draft and stash prospect in the latter part of the 2nd round. He showed well in his first season competing at the highest levels of European basketball, and definitely still has some room to improve, especially if he's actually 21 like his date of birth indicates, and not 24 like most NBA teams suspect. Either way, he's clearly not a finished product. His energy level and size make him a legitimate prospect, albeit one with a low ceiling.
Read full article

Matt Williams
@DraftExpress
Union Olimpija's Giorgi Shermadini shares a similar profile to Jonas Valanciunas, ranking just behind him in %Score at 54.5%. The main difference between the two lies in that fact that Shemadini turned the ball over at a 22.9% rate, the highest in our sample. Like his Lithuanian counterpart, Shermadini finished at a good rate overall (70%), with most of his offense coming off of the two man game, cuts, and offensive rebounds. It is interesting to see the two similarities between the roles the two young centers player for their respective clubs played in the EuroLeague. Despite the question marks about his actual age, he could be an interesting prospect for a team to draft and stash in the 2nd round.
Read full article

2008 Reebok Eurocamp in Treviso, Day One

Jonathan Givony
@DraftExpress
One of the most intriguing prospects in this camp, given how hard is to see him in action, Shermadini made his presence felt with a solid game in the low post, proving that hes more than just a stat-filler in a forgettable league. Standing somewhere around seven feet, the Georgian shows a nice frame and decent athleticism. Hes nicely strong, but particularly, hes pretty aggressive and physical playing the game, which is very good news for a low-post guy like him. He had time to show a nice touch with his right hand while delivering some jump-hooks, and some promising footwork, while effectively using his body against his opponents. Hes pretty coordinated, hes tough and he seems to know the game quite well. Perhaps hes not oozing with potential, but hes definitely a basketball player.
Read full article

Jonathan Givony
@DraftExpress
Shermadini didnt leave all that great of an impression in the first day we saw himhe seemed to have an off-day shooting, and is never going to wow you on first glance with his body or athleticism. 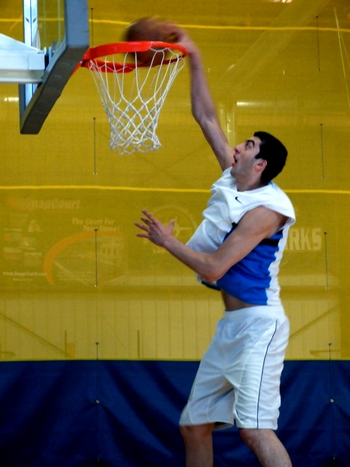 In the second day, though, the 19-year Georgian definitely showed a lot more. Despite only playing basketball for three years now reportedly, he seems to have very nice skills on the offensive endtaking over at times and almost being dominant on this end of the floor. He can play both facing or with his back to the basket, displaying a very high skill-level that could only come from putting a great deal of time in the gym. In the paint he has some fairly decent footwork, including a nice drop-step, some solid pivot moves, a pretty swooping hook-shot, the ability to turn to either shoulder, and good instincts using fakes and baiting his man off his feet. He can finish with either hand, has very good touch, and seems to have a pretty good feel for putting the ball in the net.

On the perimeter, Shermadini has a very effective jumper with range out to the 3-point line that he gets off with a very high release point. He ran a lot of pick and pop plays and got very good results, not hesitating in the least bit to take charge and aggressively make his presence felt. He moves off the ball well and has pretty good hands catching the ball on the move off pick and roll plays, and the coordination to not look too bad doing so. He also used jab-steps effectively from the top of the key, and took his man off the dribble with a slow developing first step.

Shermadinis shortcomings mostly lie in his below average athletic ability, which will make it difficult for him to be much of a factor on the defensive end in particular. He isnt quick enough getting out on the perimeter to close out on open shooters. His average frame makes it difficult for him to establish very good position in the post, and hes not the most explosive guy around in terms of finishing around the rim or getting up to contest shots. While his ability to guard in space and cover ground may be limited, Shermadini does have a chance to improve the strength of his base. A stronger base will help him to hold his ground in the post against thicker, stronger opponents.
Shermadini isnt getting any breaks whatsoever from the mostly collegiate players around him. He was getting fouled hard time after time every time he took it strong to the basket, but had no problem bouncing back and getting right back to work as if nothing happened. Thats something you have to respect, as even though hes not the most physically imposing player around, he doesnt look soft either.

Weve watched footage of Shermadini in the incredibly poor level of competition he plays in in the Republic of Georgiathis was obviously 100% more informative than anything we saw there. Hes listed as being a very young player at the age of 19 (although not every NBA scout we talked to about this is so sure), so time is definitely on his side here if thats indeed the case. His problem is that very little is known about his background and how he compares with other players in this draft in real five on five games. Were interested to see how he looks at the NBA pre-draft camp next week (if he plays) and the Reebok Eurocamp in Treviso in a few weeks. Were somewhat skeptical by nature about evaluating players in a setting like thisbut there were definitely some things to be intrigued by. This was not just our opinion only. We had the chance to watch Shermadini in a private workout attended by Mavericks guard Jason Terry and run by Ivorie Manning. 20 minutes into the workout, Terry was noticeably impressed. By the end of the session he had nothing but glowing things to say about the young big mans performance
Read full article