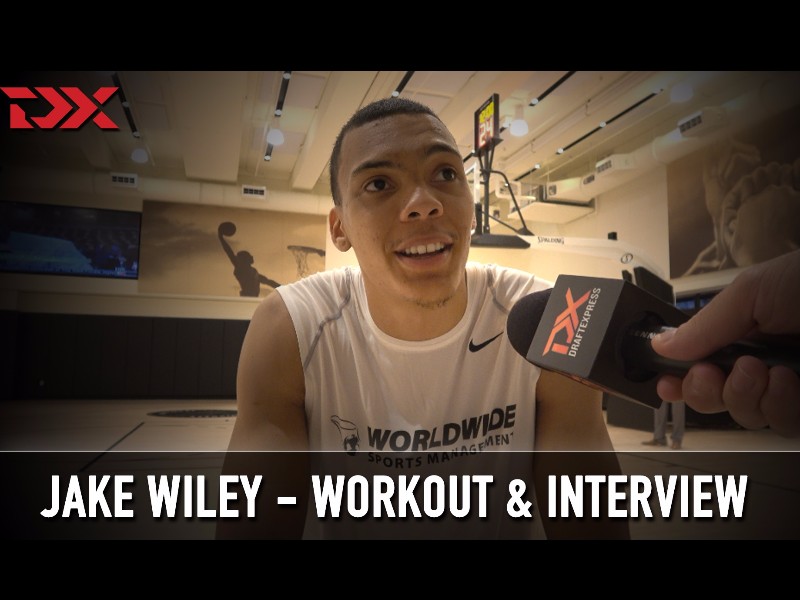 Why He Fits: Taking likely the most incredible path to becoming a NBA prospect of any player in the draft, Wiley has a chance to stick in the NBA as a high-motor bench big who runs the floor, cleans the glass, switches screens and protects the rim in spurts - 3.2 blocks per 40.

He's undersized for a non-floor-spacing big at around 6'7, 215 pounds, but is the ultimate competitor, impacting the game on both ends of the floor with his sheer energy. He's quick off the floor, can finish above the rim in space, and, although he doesn't project as much of an offensive threat, has some touch inside the paint and from the free throw line (82.4% lifetime).

Wiley may not have the size to battle traditional big men in the paint, but with the NBA trending smaller, he certainly has value sliding with perimeter-oriented bigs and switch ball screens. Even if Wiley doesn't hear his name called on draft night, he'll at the very least be a prime candidate for a two-way contract, and given his history, you have to think he'll do everything he can to scratch and claw his way onto an NBA roster.

Drawbacks: What does Wiley bring to the table at the NBA level outside of energy? He's undersized even in today's NBA at 6'7 215 pounds (although his 7-foot wingspan helps) and functions as more of a five offensively, with mot of his damage coming in the paint. While his competitiveness is certainly a plus, he plays the game very sped up offensively, as he committed 4.6 turnovers per 40 minutes playing in the Big Sky conference. If he's not a passer, shooter or NBA level finisher on offense, does he bring enough to the table on the defensive end to earn playing time? Wiley will have quite the adjustment going from Eastern Washington to the NBA or D-League, which was evident at times at Portsmouth as his defensive fundamentals and overall feel on that end left something to be desired, even if his energy covered up some of his mistakes. The Bellevue, WA native has a tremendous back-story and plays incredibly hard, but he'll likely have to find a couple of things he can hang his hat on consistently in order to crack an NBA rotation, starting potentially with a consistent spot-up jumper.
Read full article

Matt Williams
@DraftExpress
-Jake Wiley was one of the lesser known prospects among PIT invitees this year having just one season under his belt at Eastern Washington, but was arguably one of the most impressive performers, averaging 17 points and 9 rebounds in 27 minutes per game.  He's not very tall for a power forward, at just 6'6 ¼ without shoes, but his 7'0 wingspan is more than decent for a power forward. His size isn't a deal-breaker as his dimensions are very similar to those of Thaddeus Young (6'5 ¾ without shoes, 210 pounds, 6'11 ½ wingspan) who sees the majority of his minutes at power forward in the NBA, and the fact that he's such an explosive athlete certainly helps his cause as well. Wiley measured a 37.5-inch no-stop vertical jump, which would have tied him as the most explosive leaper at last year's NBA Combine, while his 3.17 ¾ court sprint time would have ranked him in the top five. Wiley's length, athleticism and tremendous motor, endeared him to scouts all week long, and he is bound to be a very popular figure on the NBA draft's private workout circuit this spring, especially if he can show that his 80% FT% can translate into some jump-shooting potential.
Read full article