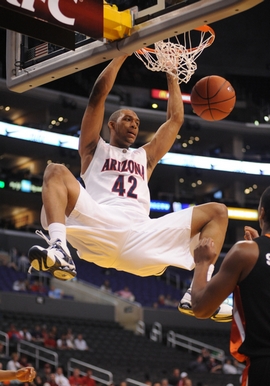 Joey Whelan
@DraftExpress
Based off production alone, its very difficult to justify Hornes spot on this list. After all, 3 points in 15 minutes per game is hardly the stuff legends are made out of, freshman or not. Still, the NBA draft revolves around what prospects can become in the future, not what they are now, and if were talking about prospects in the Pac-10, there are many reasons to give Jamelle Horne a long look.

His physical attributes would be a good place to start. Showing decent size standing somewhere between 6-6 and 6-7, with an excellent frame and wingspan, to go along with outstanding athleticism (a great blend of quickness and explosiveness), Horne fits the ball for what a modern day NBA small forward should look like, even if his skill-set does not at this point. The potential is obvious. Horne was a consensus 5-star recruit in high school, a borderline McDonalds All-American who was ranked 30th by Scout.com and 21st by Rivals.com.

Playing almost exclusively at the power forward position as a freshman, out of necessity because of injuries and a severe lack of depth, but also because he just isnt skilled enough to man the perimeter full time just yet, Horne is mostly a garbage player at this point. His production comes off a mix of transition baskets, offensive rebounds, cuts off the ball and emphatic finishes around the rimrelying heavily on his athleticism.

Showing the touch and confidence to knock down a mid-range jumper every now and then, his numbers from beyond the arc (2/15 on the season or 15%) tell you all you need to know about his range at the moment. His shot has a bit of a hitch in it, but it has some potential, and it wouldnt be a shock to see him developing solid 3-point range at some point in his college career. In the rare opportunity that he would put the ball on the floor, Hornes ball-handling skills looked extremely underdeveloped, eliminating any possibility of being able to create his own shot. To say he lacks polish is a bit of an understatement compared to most players we typically discuss. Getting stronger also looks like something that should be a major priority.

Defensively, Horne doesnt have the best fundamentals youll find, but his terrific tools make up for many of his shortcomings on the collegiate level. His effort level looks solid, which mixed in with his length and lateral quickness make him fairly difficult to get by on the perimeter.

All in all, its obviously extremely premature to be discussing Horne as a legit NBA prospect, but its also evident that he will get his fair share of looks by the time hes done at Arizona. The only question is whether hes a four year prospect or well see a big jump in ability earlier than thatsomething thats not very easy to predict at this point. He reportedly has strong intangibles, which should help in that regard. Right now Chase Budinger likely has the small forward position on lock down, meaning it will be at least another year until hes able to garner some real experience playing on the perimeter. Considering his size, thats obviously the direction he needs to go in. Time is obviously on his side.
Read full article