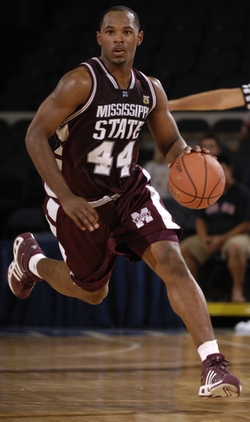 Joseph Treutlein
@DraftExpress
After bursting onto the NBA Draft scene as a sophomore as one of the most unique and versatile players in the country, playing four positions for Mississippi State, Jamont Gordon has continued to put up excellent numbers this year while leading his team to a likely NCAA tournament berth--their first in three seasons.

While Gordons scoring and field goal percentage are up, most of his other numbers are down, including his rebounding, assists, and 3-point shooting percentage. Hes turning the ball over more, his assist to turnover ratio has gone down from 1.52 to 1.19, hes getting to the free throw line less, and hes taking substantially more 3-pointers, even if hes hitting them at a worse clip.

Gordon remains one of the best shot-creating guards in all of college basketball, capable of making something out of nothing on a regular basis thanks to his phenomenal scoring instincts. Left-handed, he shows tremendous wiggle facing up his opponent and keeping him on his heels, combined with terrific ball-handling skills and hesitation moves, excellent strength, outstanding body control, and an extremely aggressive mentality putting pressure on the defense. Hes very creative getting into the paint and finishing at the rim, drawing a fair amount of fouls in the process. Not a freakishly explosive athlete, hes nevertheless strong and skilled enough to bounce off opponents like a bowling ball in the lane and then just hang in the air, often finishing off the glass with tremendous touch. Having someone who can create offense the way he does at the end of a shot clock on your roster is a big plus as far as many coaches are concerned, at any level of basketball.

As far as perimeter shooting is concerned, though, Gordon still has a long ways to go. His mechanics prevent him from being anything more than average at best here, as he elevates off the floor with a little hop and then releases the ball on the way down, which prevents him from getting any type of consistent release point. He can get hot at times and knock down a few 3-pointers in a row, even from NBA range at times, due to his terrific touch and natural scoring instincts-- but the 33% he shoots from behind the arc on a high volume of attempts (5.5 per game) tells you all you need to know about his accuracy here. He has a fairly slow release, especially on his mid-range jumper, and is not immune to some extremely bad misses, with air-balls and such not being an uncommon sight. He also only hits 70% of his attempts from the free throw line.

The fact that Gordon takes so many 3-pointers despite clearly not being a very good shooter begins to tell the story about his shortcomings as a prospect for the next level. His shot-selection and overall decision making can be very poor at times, looking fairly selfish with his dominant style of ball-handling, freezing teammates out, and clearly hurting his team when his shot is not falling. He does not value possessions the way you would hope considering that he will probably have to see some minutes at the point guard position in the NBA down the road, being extremely turnover prone (he ranks 4th in this category amongst all players in our database), looking very out of control, and showing a slightly questionable basketball IQ with some of the passes he makes. He gets a little predictable at times, as at some point you figure out that when hes driving with his (better) left-hand, hes usually going all the way to the rim, while when he drives right, hes probably going to pull up at some point.

Defensively, Gordon is very solid, clearly playing a big part in Mississippi State rating as one of the best defensive teams in the NCAA this season. He has very good tools to compete on this end of the floorshowing excellent size, strength, length, and a wide frame, while also putting a good amount of effort into his work here. At 6-4, 225, and with his wingspan, he can really overwhelm opposing guards physically with his smothering style of defense.

Despite being their main facilitator offensively (responsible for a very substantial 25% of their offensive possessions), Gordon is often the one responsible for guarding the opposing teams primary ball-handlerputting very good pressure on the ball, contesting shots, and generally doing a nice job slowing his matchup down. Gordon might lack a degree of lateral quickness to be considered an elite defender against quicker guards at the next level, but its nothing flagrant and shouldnt hurt him too much from being able to guard both guard spots coming off the bench in the NBA. Hes also a terrific rebounder, indeed one of the best at his position in the NCAA, pulling down an excellent 6.3 boards per game.

Gordons success at the next level will largely hinge on how open he is to changing his game to suit his future role over the next few years. His shot will probably have to be taken apart and reconstructed if hes going to be considered an adequate threat to hit NBA 3-pointers, something that is extremely difficult to do unless the player is fully committed to the fact that it needs to be done. Hell also have to be much more willing to defer to his teammates than he currently shows, especially in late-game situations where he often goes wild and seems to take everything as a personal challenge, rather than as a team effort. His scoring tools and the aggressiveness he brings on both ends of the floor makes him an ideal candidate for a sparkplug role off the bench in the NBA, in the mold of a Flip Murray, Keyon Dooling or Rodney Stuckey, and if he shows the right mentality, he could stick in the NBA for a long time.
Read full article

Joseph Treutlein
@DraftExpress
Jamont Gordon quietly put together an extremely productive sophomore season, averaging over 16 points, 7 rebounds, and 5 assists in the SEC. Its also worth noting that he improved in every single notable statistical category from his freshman to sophomore year, while not seeing an increase in minutes. Gordon regularly plays three, sometimes four, positions for the Bulldogs, though hes primarily their point guard, even if he projects as more of a combo-guard in the pros.

The left-handed Gordon has a very strong build for a 64 guard, though hes not the quickest or most explosive athlete for his size, having an average first step without a great vertical leap. Despite these shortcomings, Gordons game is predominantly based on his dribble-drive slashing game, as hes extremely aggressive attacking the hole, and does a pretty good job finishing when he gets there. He uses fakes and jump-stops well to get by his man, and does a good job adjusting in mid-air and finishing off the glass at the basket, often going to a reverse lay-up off the glass if he gets too deep below the rim. He doesnt make very many quick moves in the lane, but relies on subtle changes in directions and turns of his body to make his way to the hoop.

Gordon is a lot more comfortable going left when attacking, not going as strong to the hole with his weaker right-handed dribble, though hes still able to get the job done that way occasionally. Gordon takes contact well at the basket, but sometimes has trouble finishing over bigger opponents, not getting much elevation on his field-goal attempts. This is also sometimes a problem when Gordon is offensive rebounding, as he struggles to convert on many of his put-back attempts. Thats not to take away from his rebounding, though, as its one of his greatest strengths. He attacks the boards with great ferocity on both ends of the court, often pulling down rebounds over players much larger than himself.

Gordon also brings a formidable outside shot to the table, having decent form on his spot-up shots, despite a slower than average release speed and a little bit of a hitch in his shooting motion. Gordon gets into trouble when pulling up from deep, though, not usually keeping his feet beneath him, while fading away from the basket, leading to much decreased accuracy. Gordon also rarely utilizes a mid-range game, taking most of his field-goal attempts from behind the three-point arc or within 5 feet of the basket.

As a point guard, Gordon gets the job done at the college level, but probably isnt poised to be a full-time floor general at the next level. He gets most of his assists finding open shots in the basic flow of the offense or pushing the ball in transition, rarely creating off dribble-drive opportunities. When taking the ball into the lane, Gordon usually is looking for his own shot, though he does make the occasional dump-off down low.

Defensively, Gordon is aggressive staying with his man, fighting through screens, and playing pressure defense, but his lateral quickness is a weakness against many quicker guards. He isnt afraid to take a charge, and his fundamentals are solid, but he still gets beat in one-on-one situations, where he is susceptible to quick moves.

Gordon is a bit tough to project as an NBA player, as his style of play doesnt really emulate any current player. He has all the intangibles one would look for, and definitely has a lot of skill, but hes between positions and isnt the greatest athlete, so things may not be as easy for him against higher competition on both ends of the floor. He should be drafted this upcoming year should he declare, but to push himself into the first round, hell need to improve his jump shot and cut down on his turnovers. Adding a bit of a mid-range game wouldnt hurt either.
Read full article