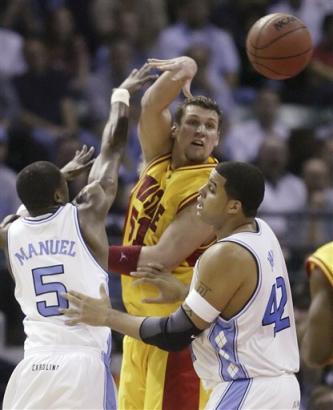 Strengths
Jared Homan isn't quite a household name, but he has a very intriguing package of size, skill, and mentality that has certainly piqued the interest of NBA scouts.

Playing in a conference known for its rugged, physical play, Homan threw his body around with the best of them. At 6'10, 250, he never backs down from a physical challenge, and seems to relish a heated, energetic post matchup. One could say that he plays the game with a mean streak, and in the case of a scrappy player like Homan, that isn't a bad thing.

Once Homan has position in the post and gets the ball in his hands, good things tend to happen. Homan has a beautiful jump hook, that he is comfortable using fading away from the basket, or spinning into the middle of the lane. He has nice touch on the shot, and given his bulk, it's very hard to keep him from getting good looks on a consistent basis at the college level.

Homan also has touch on his midrange jumper, and is very comfortable facing up for a 10-15 footer.

As touched on above, Homan defines the term scrapper, and is a menace on the glass. Given that he doesn't mind using his body and creating contact, he always gets great position on the defensive glass.

As a defender, Homan will always battle to keep his man off the blocks and understands the nuances of good post defense. Surprisingly, Homan is also an accomplished shot blocker. He doesn't have the bounce of your typical shot-altering big man, but he does a good job of anticipating and helping out on the weak side.

Finally, it must be mentioned that Homan has shown steady improvement all four years at Iowa State. He started out as a mere roleplayer his freshman season, but was the Cyclones' main post option by his senior year.

Weaknesses
Jared Homan is a fairly well-rounded player, so there are no glaring weaknesses here. However, he isn't ever going to be an all-world type of athlete, so his upside may be somewhat limited.

Homan has a very nice frame, but he still could use some work in the weight room. He isn't an impressive leaper, and doesn't get up and down the court as well as an NBA big man should.

While Homan played over 36 minutes per game his senior year, his style of play left him visibly exhausted at times. His conditioning could use some improving, though this certainly shouldn't be a major issue.

While his size is very nice for an NBA power forward, Homan played mostly center at the college level. While there will always be certain matchups that Homan can exploit, he may be stuck somewhere in between being a lumbering PF and an undersized C.

One final area to mention about Homan is his low shooting percentage for a post player. Some of this might have to do with the conditioning issues mentioned above and the fact that he was ISU's only source of post offense, but it is somewhat disturbing that his field goal percentage dropped four years in a row.

Competition
In a conference full of rugged big men, players like Oklahoma's Kevin Bookout and Texas' Brad Buckman might be more well known, but Homan might have been the best of the bunch this past season.

Homan was a roleplayer as a freshman, averaging just 3.6 points and 3.4 rebounds in just 16.6 minutes per game. His role increased over the next two seasons, with his scoring increasing to 11.1 points per game by his junior year.

Homan ended his career on a high note, with two impressive games in the NCAA tournament. He followed up a 14 point, 13 rebound, 7 block performance against Minnesota with 19 points and 20 boards against Sean May and North Carolina.

Homan was then invited to the 2005 Portsmouth Invitational where he was very impressive, helping his team to a 2nd place finish, and making DraftExpress' all-tournament team. He averaged 16.3 points and 10.7 rebounds in 3 games at the tourney.

Outlook
While Homan doesn't excite as much as many of the other big man prospects in this draft, he does have a surprisingly well-rounded game. His jump hook is a move that will translate over very nicely in the NBA, and he has the mentality to succeed as a journeyman for a few seasons, if necessary.

His athleticism probably limits his upside at the moment, leaving him as a potential early 2nd round pick. The fact that Iowa State has been producing NBA-quality big men for years (Kelvin Cato, Marcus Fizer, Paul Shirley, Jackson Vroman) probably doesn't hurt him.

All things considered, even as a second rounder, Homan has a chance for a long NBA career.
Read full article