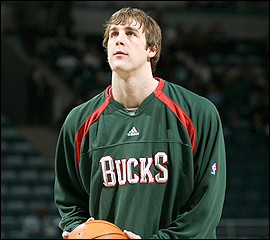 Translating Potential into Production; The D-League is Working

Jonathan Givony
@DraftExpress
A player that no one has really seen much of in the last three and a half years since he suffered a season-ending injury mid-way through his senior year at Iowa, Jared Reiner is certainly making up for lost time in the D-League so far. A top recruit at Iowa, Reiner spent his first year out of college with the Chicago Bulls, but only saw 131 minutes of action through the course of the entire season. The following season, Reiner was signed by the Clippers but was quickly waived before being picked up by the Phoenix Suns. He suffered a knee injury and never saw even a minute of action with them before being waived in January. He went into camp with the Spurs this summer, even getting some guaranteed money up front, but did not make the final cut and eventually decided to try the D-League route. Even in summer league this past July (this time with Seattle), he did not see all that much playing time. In short, its safe to say that not many people have seen enough of Reiner in a true game setting to make a true evaluation of the type of player he is.

All that changed this past week in Sioux Falls, where he averaged 20 points and 9 rebounds in two games at the Showcase. Hes been very inconsistent through the course of the season, largely due to foul trouble, but managed to string together two very impressive performances in front of more scouts and decision makers than hell get to see all year long.

From the little weve seen of Reiner over the past two summer leagues, he seems to have added some nice bulk to his frame. This has helped him athletically, as he looks pretty mobile getting up and down the floor. Thanks to his wide shoulders, he should have plenty of room to continue to add bulk to his frame. Coordination isnt an issue for him as it often is with players his size, as hes pretty fluid moving around in half-court sets and even showed off some ball-handling skills and a reasonably quick first step taking his man off the dribble. Where he really shined though was in his mid-range game, where he showed excellent touch from a number of different spots on the floor. His team ran a lot of pick-and-roll and pick-and-pop sets through him, and Reiner took advantage by knocking down a series of very nice looking jump-shots. Moving off the ball intelligently, he also displayed good hands and a quick mind catching the ball and going up immediately for a layup. Although he doesnt appear to be an extremely prolific rebounder, he was pretty active in this area, particularly on the offensive end. Defensively, he got outmuscled at times trying to defender stronger players, and this is an area that hell have to work on if hes to stick in the NBA, especially showing on screens and using his lateral quickness to stay in front of players.

All in all, Reiner did a good job making sure that people remembered who is. NBA scouts and European General Managers we spoke to seemed encouraged by his performance, and they said theyll surely continue to track his progress throughout the year. He could certainly make it this summer as an end-of-the-bench NBA big man at the very least, or he could really try to make it big by putting up solid numbers in a league like Italy for example, where his style of play would seem to fit perfectly. Either way, Reiner is going to have options at the end of this season, which is what the D-League is all about.
Read full article