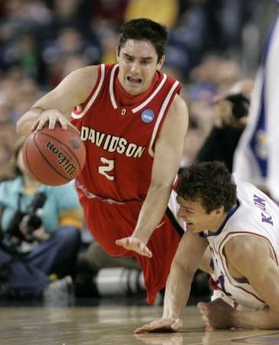 Kyle Nelson
@KNelsonDX
While Stephen Curry was certainly the story of Davidsons deep run into the NCAA tournament, Jason Richards was at times just as essential. The senior point guard averaged 13.3 points, 9 assists, and 2 turnovers per game during the tournament against the likes of Gonzaga, Georgetown, Wisconsin, and Kansas, to go along with his season averages of 12.7 points, 8.1 assists, and 2.9 turnovers per game. Though the tournament answered a lot of questions about his potential to play at the next level, there are still a lot of concerns before Richards can be considered even a borderline player.

Physically, Richards has good size for the point guard position at what looks to be a legitimate 62. Athletically, however, he is going to have a lot of trouble at the next level staying with quicker and more physical perimeter defenders.

This is most evident in his defensive ability. He had a lot of trouble staying with his man on the perimeter, unable to stay with Mario Chalmers, Sherron Collins or Michael Flowers, who all created space for themselves easily while guarded by Richards. He has quick hands, but his lateral quickness is below average at the college level, let alone at the professional level. Likewise, he is slow to close out his man on the perimeter, and while he makes an effort to get through screens, he does not often have the strength to do so. He shows solid defensive awareness, but this will only help him so much considering his physical limitations.

Offensively, he likes to slash to the basket and while he likes to drive right, he shows the ability to take the ball to the basket with either hand. He has a below average first step, but is deceptively quick with the ball in his hands as he showed on a play where he blew by Sherron Collins for an easy layup in the Tournament. As supported by his 41% field goal percentage, however, he has trouble finishing around the basket. It seems like he does not realize his limitations sometimes and will drive into traffic without an idea of what to do with the ball; he lacks the athleticism, ability to absorb contact, and body control to finish around the rim and often is forced into a bad shot or is blocked.

Away from the basket, Richards is a decent shooter, and despite his weak percentages of 42% from the field and 32% from beyond the arc, his form does not look unsalvageable. At this stage, he has a tendency to push the ball on his jumpshot and often overshoots it despite that fact that he has a fairly consistent release point. Improving his form is essential if he wants to play at the next level, and will start if he increases the fluidity of his jumper. He can also pull up off of the dribble, but his shot selection is a major problem at this stage and he frequently attempts to get shots over longer and more athletic defenders to bad results. If he wants to play at a high professional level (NBA or not), he must become a better shooter.

Richardss bread and butter, however, is his point guard ability. He is a pure point guard who led the NCAA in assists and was second in assist/turnover ratio. As proven by his performances in the tournament, Richards changes tempo extremely well and adapts to different offensive pacing against teams like Wisconsin that pride themselves on dictating tempo. After all, he had 36 assists in four games, with just eight turnovers. His passing ability is very good, showcasing his vision and his ability to judge successfully how to respond in an array of offensive situations. Against some of the best defenses in the country, Richards ran pick and rolls, backdoor cuts, and transition possessions flawlessly and with a poise of a veteran. Sometimes he will get himself into trouble by over-dribbling or getting caught in traffic, but for most part, he has become a very mature floor general over his four years at Davidson. The Wildcat offense ran less efficiently without their point guard on the floor, and they will miss his presence dearly next season.

Richards does not have the physical profile to be a factor at the next level: that much is certain. He did, however, complicate his scouting profile through his NCAA tournament performances where he showcased on a national stage his ability to play with some of the most talented collegiate players in the country and quite a few legitimate NBA prospects. Hell have opportunities at Portsmouth and various workouts to prove himself against NBA-caliber athletes as well as answer some questions about his flawed jumper. While the NBA seems like a stretch at this point, Richards combination of intelligence and veteran point guard savvy will obviously get him a nice contract somewhere.
Read full article