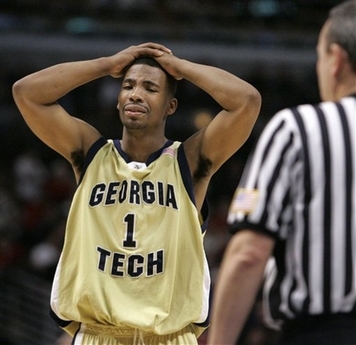 Joey Whelan
@DraftExpress
While his teammate Thaddeus Young had a mediocre game, there is no other way to describe Javaris Crittentons performance than as an absolute disaster. He went scoreless and was held without an assist in the first 18 minutes of the game, which helped UNLV coast to a double digit lead that they maintained for most of the first half. Crittenton settled for ill-advised outside shots and pounded the ball incessantly, which meant that Georgia Techs offense lacked any kind of direction. He struggled with the fullcourt press and turned the ball over repeatedly on terrible decisions, not making any reads in the half-court and constantly making the same mistakes over and over again.

Crittenton did manage to show off some of his scoring prowess in certain sequences of the 2nd half, taking advantage of the fact that UNLV had no matchup for him once he decided to create his own shot with purpose and make his way to the basket. He looked spectacular on some of these drives, athletically double-clutching around the hoop and finishing off the glass, throwing difficult one-handed floaters in from six feet out, and using a pass fake on another occasion to keep his man off balance and open up a lane for himself in the process. He didnt look for his teammates all that much in the process, but considering how poorly Techs half-court offense looked (which obviously had plenty to do with their point guard), it was pretty hard to blame him.

Down the stretch, though, Crittenton essentially sealed the deal on why he has to return to school for his sophomore season. He showed a complete lack of poise in the way he handled the game, being called for a rare five-second call, showing little urgency when his team was down and the clock was ticking, displaying highly questionable decision making skills. Its something weve seen a few times this year already, but was amplified by the sheer magnitude of this game.
Read full article

Joseph Treutlein
@DraftExpress
Although we wrote about him at the beginning of the season following the Maui Invitational, it might be time for a short update on Javaris Crittenton considering how intriguing of a prospect he is and the lack of depth this draft possesses at the point guard position. Standing 6-5 and possessing terrific athleticism and instincts for his position, there are few point guards in the NCAA that you can say have more natural tools that the NBA looks for.

From what we saw in the Clemson game and beyond, Crittenton has a phenomenal combination of size, frame, strength, blazing quickness, all-around smoothness and outstanding talent. Hes a terrific ball-handler who puts relentless pressure on defenses by constantly looking for gaps to penetrate and get in the lane to draw contact or dish off the dribble. He can go left or right, utilizes shot and ball-fakes effectively, and has a smooth crossover he uses instinctively to keep his matchup off balance. Hes got plenty of herky-jerkiness to his game, and once hes inside the paint, loves to elevate smoothly for either a beautiful floater or a one-handed layup high off the glass. With six seconds left to go in the Clemson game, Crittenton used one of these gorgeous floaters to put Georgia Tech up by one point, but the Tigers came right back and scored at the buzzer off a James Mays layup.

As a point guard, Crittenton has been up and down as you might expect from a freshman playing against good competition in the beginning on his college career. He shows great flashes of court vision at times by making terrific post-entry-pass lobs and drive and dish plays, but has a tendency to get too flashy and play out of control. Hes been very dominant with his ball-handling so far (in the sense that hes constantly dribbling) and therefore fairly turnover prone as well, but hes starting to settle down a bit lately to a certain extent.

At times youll still see him pounding the ball excessively and over-penetrating or running into brick walls. As you can say about most young and athletic point guards, he needs to learn how to pick his spots better, something that will probably only come with experience and maturity. Hes still not overly effective in terms of running a half-court offense and controlling tempo, as he only seems to know how to play at full speed, rather than shifting gears from time to time to keep his man off balance. His decision making and overall focus also often leaves something to be desired in terms of his all-around consistency.

Something that could really help him is a consistent pull-up jumper he can utilize from mid-range. Its something you dont see him use at all as hes either spotting up for 3 or driving bullishly into the lane. Crittenton is knocking down his 3-pointers at a very good clip this year-- 44%--but hes only attempted about 2.7 per game and never really against good competition. Well see as the year progresses if his percentages are for real since he was not known as a great outside shooter in high school, particularly off the dribble. Defensively, he has a very long ways to go in terms of knowing how to contain his man and adequately make rotations with the team concept, particularly guarding the pick and roll.

All in all, its hard to find a point guard in college basketball with more NBA upside than Crittenton. Should he decide to enter the draft, hell probably end up as a first round pick if he takes care of his business the way youd expect him to. At the same time, hes still very much a raw prospect who needs as much high level playing time and experience as he can get before hed be ready to contribute anything at the NBA level. For that reason, another year in college is imperative for his development, and it really wouldnt be a shock at all to send him land as a lottery pick if he takes his time, wins some games in the NCAA tournament, and shows that hes ready to enter the NBA as a legit backup point guard rather than as a long-term project.
Read full article

Joseph Treutlein
@DraftExpress
On his outside jumper, Crittenton has great form, high elevation, and due to his size, he has no trouble shooting over defenders. But where Crittenton looks really impressive is breaking down the defense and taking the ball to the hole. Crittenton was at his best in the first game against Purdue, where he took over the game in the second half, getting to the rim at will and drawing lots of contact resulting in free-throw attempts. Crittenton shows good explosiveness both going into the air and with his first step, can proficiently drive either left or right, and uses his athleticism and creativity to create high-percentage shots in the lane.

While Crittenton was very impressive in scoring the ball himself, he didnt have as much success running his team, showing some trouble playing the role of point guard. Crittenton has a tendency to over-dribble pretty often, and his teams offense always seems to be lacking any discernable flow. Crittenton is very turnover prone at this stage, making some bad decisions with his passing, showing some trouble responding to pressure defense, and just not doing a very good job consistently creating for others. Crittentons mentality is obviously not where it needs to be for him to be a point guard, but he did have some bright spots with his passing.

Defensively, Crittenton shows the ability to be a good defender, and has excellent physical tools for doing so, but oftentimes he just doesnt put in the effort, not moving his feet, not getting his center of gravity low, and too often lunging at the ball and allowing his man to blow by him. He did show some ability during the tournament to disrupt and create turnovers with his hands, but he was far too inconsistent on the defensive end, and had far more blunders than he did positive plays.

For the time being, Crittenton needs to continue doing what he does best, but finding a way to better incorporate those skills with his responsibility to run the team. With time and experience, if he has the desire, he should be able to improve on his decision-making and become a better overall floor general. He also needs to focus harder on the fundamental aspects of defense, though this is a problem that most of his teammates face as well, so it could be awhile before that change is made. Its clear Crittenton has all the natural tools one could want in a point guard, but its up to him put them into becoming a more consistent floor general.
Read full article

Mike Schmidt
@DraftExpress
Crittenton displayed an impressive ability to finish near the rim with a high level of athleticism. He shot the ball from the perimeter with a nice looking stroke, but only made 1 of his 4 three point attempts. Crittenton also has an outstanding handle, and pushed the ball up the court during the time he was on the floor. He is more of a scoring guard right now, still transitioning to the point guard position. Javaris will need to continue to work on his point guard skills, and look to his teammates more often. Crittenton was a teammate of Dwight Howards in high school, and will be suiting up for Georgia Tech next season. He is a very good NBA prospect, who could make the jump to the NBA after a couple years of college.
Read full article