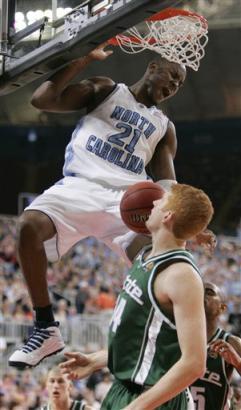 Strengths
2003-2004: A very versatile player, has a nice all around game. Excellent athlete. He is North Carolina's utility man, he does all the small things needed to secure the win.Jawad has showed improvement in many aspects since entering college. His free throw shooting has improved leaps and bounds, over 20% from his freshman year. Williams isn't afraid of hard work, and is willing to put in time to get better as a player. His range has also dramatically improved since arriving in Chapel Hill, and he has put on over 20 pounds of muscle just in the last off-season. Right now he's a good rebounder due to his athleticism, wingspan and desire.

A good man to man defender, capable of playing the type of physical and exhausting lock down defense that opponents hate. He has a nice wingspan and he uses it well to block shots and come up with steals.

Jawad is extremely athletic, but he's also tough as nails, he's played through numerous injuries in his career so far. He broke his nose earlier this season and continued to play through the pain. Has gone through dozens of stitches on his face in his career at North Carolina so far. He has no fear of anything and no regard whatsoever for his own personal safety. He'll do anything to secure the win. Jawad is a very good transition player, he runs the floor well, and knows how to find the open man, although you do not want him leading the break. His court vision in general is impressive for a small forward, he's an unselfish player and usually moves the ball around well. In fact, you might say that passing is one of his strong points, and that might catch you off guard because of his rugged style of play.

This year in particular Williams has shown that he is a clutch shooter that wants to take the big shots at the end of the game.

Williams' offense is still somewhat unrefined, especially down low in the post. He doesn't have great hands and you would expect him to be a better finisher around the basket when he is posting up his matchup. He would be a lot more dangerous if he could add some new post moves to his repertoire.

Jawad's biggest problem in college so far has been maintaining a consistent level of intensity throughout a game, and on both sides of the floor. He has the tendency to lose focus and disappear for large stretches of games sometimes. He has been criticized in the past for not being assertive enough, and often he'll settle for the outside shot instead of taking the ball strong to the hoop.

Part of that might stem from Jawad's poor ball handling skills. He has a good strong first step, but he often turns the ball over when trying to use it. Turnovers in general are a problem for Williams.

Williams shooting has improved tremendously since arriving in college so far, but he needs to continue to work on this skill to become the all-around player that many envision him becoming in the NBA.

Competition
2003-2004: Logged 27 points and 12 boards against Jamal Levy, Eric Williams, and the rest of Wake Forest this year on December 20; Season high this year of 28 points came against Davidson.

Outlook
2003-2004: Jawad Williams will be in the 2005 Draft by default and will likely be drafted somewhere between the middle and the end of the first round, depending on how much he improves until that time and what kind of Small Forward prospects are ahead of him.

Comments
2003-2004: Jawad is the kind of player who's game looks suited much better to the NBA then college. He does not get a lot of hype because he is playing next to much flashier players in Raymond Felton, Rashad McCants and Sean May. When it's all said and done though, Jawad could be the best pro out of the four of them. He is going to be a solid role player for whichever NBA team decides to take him.

Facts
2003-2004: A Mcdonald's All American in high school. Carolina's leading active scorer and rebounder. His father was a boxer, and won the Golden Gloves Championship in Cleveland. Jawad's brother Tony followed in his dad's footsteps. His mother played College Basketball at Cleveland State, and his sister Na'Sheema, followed in her footsteps and played at Vanderbilt and the ABL. His other sister, Sieda, plays Center for Virginia.
Read full article