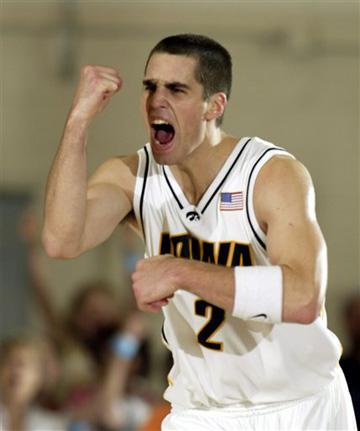 Strengths
Horner possesses a good combination of size and strength for a PG, measuring in at 63 with a strong frame to boot. He is highly coordinated, has an excellent motor, and is well-conditioned to play long games at high speeds.

Horner is the consummate pure point guard. He is highly intelligent and understands how to control the tempo, excelling in both the half and full court. He manages a game well: running plays, directing his teammates, and establishing good offensive spacing for his team. In terms of court vision, you cant get much better than Horner. He sees the floor extremely well and reacts on it quickly. He never puts his head down with the ball, always ready to make a pass to the open man.

While he wont blow you away with fancy moves, Horner is a good ball-handler. He rarely commits unforced turnovers and always dribbles with a purpose. He can handle well with both his right and left hands, keeping the ball low to the ground and protecting it from defenders.

Horners passing is simply a beautiful thing to watch. Making use of his excellent court vision, Horner routinely will thread the needle to get the ball past multiple defenders to the open man in good position for an easy bucket. He utilizes this skill well in the half-court, but is at his best on the break, where hes always a threat to make a big play. Horner can easily throw a pinpoint chest pass from one free throw line to the other, keeping the ball fast and low to the ground. In the half-court, he uses his passing from static positions or off the dribble to feed the post, hit cutters, or even throw the occasional alley-oop.

Shooting is another of Horners strengths, as he possesses one of the purest strokes in the country. His shooting mechanics are picture perfect with a high, quick, and consistent release. He can effortlessly shoot the ball from NBA three-point range with good accuracy. His shot is better than his seasons .356 percentage would suggest. Hobbled by a shaky start and a mid-season knee injury, Horner didnt hit full stride until the final weeks of the season. His .408 and .425 percentages of the previous two seasons are better indications of his ability.

Horner can shoot the ball by spotting up or taking it off the dribble, but hes much better when spotting up. He moves very well without the ball and is good at moving to the open spaces on the floor. He makes good use of screens and once he gets the ball, can maintain his balance and put up a good shot even in tight situations. He doesnt get fazed from hands in his face and even can hit a leaning or fade-away shot when the situation calls for it.

In terms of slashing, Horner does fairly well once in the lane. He makes good use of screens to get separation for a first step, and usually can create a high percentage shot for himself or a teammate once in the paint. Horner never puts his head down and can often dish it to the open man once the defense is drawn to him. He can quickly recognize defenses and change gears to adjust to them. Once again, hes not one to make any flashy moves, and he's not going to evade a slew of defenders, but Horner can consistently hit a routine floater or lay it in with either hand once hes in the lane.

Defensively, Horner is very fundamentally sound and intelligent. He understands how to use his feet, body, and hands to defend both on and off the ball. Horner is a good off-the-ball defender, understanding how to stay between his man and the ball to prevent the pass. He can be a threat in the passing lanes with his strong instincts, though he doesnt gamble very often. Hes also not afraid to take a charge, even against the biggest man on the floor.

Intangibles are perhaps Horners greatest strength. He is extremely intelligent and makes use of that intelligence in every aspect of the game. He is very coachable and often serves as an extension of the coach on the floor. Hes a good character guy, never having on or off court issues. Hes very sportsmanlike, always patting a guy on the back, never getting into altercations, even occasionally offering a hand to an opponent who hit the floor. He wears his heart on his sleeve and visibly shows his desire to win. He rarely shows negative body language and if so its just out of frustration with his own game, not his teammates. He works as hard as anyone and will be the first guy to dive for a loose ball or into the stands, even if he has a brace on his knee (which he did on multiple occasions this year while recovering from injury).

Horner is also very good down the stretch of games. He can hit big shots or make good plays in the closing minutes of games when the score is close. He has an excellent poise and doesnt falter in big situations. At the same time he can also provide the fire and confidence that spurs his team onwards.

Weaknesses
While Horner possesses good strength and size for a point guard, he isnt very high on athleticism. His lateral quickness is suspect, as is his explosiveness, specifically as related to his first step offensively. These things dont cause him much trouble in the NCAA, but in the NBA, it will likely hold him back on both offense and defense.

Offensively, Horner is not a bad ball-handler, but he isnt one to employ any advanced techniques to create a shot. Youre not going to see him making a spin move, putting it through the legs, or behind the back to get to the basket. This limits his ability to create through penetration. He also has some problems reacting to pressure defense, occasionally getting caught in traps because of it. Similarly, he has an occasional tendency to pick up his dribble too early, also leaving him vulnerable to traps.

In terms of slashing, Horner has issues getting into the lane and also creating for himself once in the lane. Horner's lack of a first step here really holds him back, as he can't create through one-on-one penetration, having to rely on getting separation through other means. He cant create through penetration very often at the NCAA level, which will certainly be even more of a problem in the NBA. His lack of explosiveness also greatly limits his ability to create once in the lane. Similarly, Horner cannot consistently create his own shot on the perimeter, getting most of his attempts on spot shooting or going around screens.

Defensively, Horner does not get exposed much in the NCAA, but that could change in the NBA where his fundamentals and intelligence alone may not be enough on the defensive end. He often gets the easiest assignment defensively, where his below average lateral quickness will not be exploited. In the NBA, it wont be so easy.

Horner doesnt have many weaknesses, but the ones he has are very significant. So signicant that the lack of explosiveness offensively and lateral quickness defensively alone may be enough to prevent him from succeeding in the NBA.

Competition
Horner plays in the Big Ten conference, where he plays against some of the most competitive teams with many NBA-caliber players. But because of his defensive weaknesses, Horner rarely gets assigned to these players. Now a senior, Horner started and played major minutes for all four years, showing just slow and steady improvement throughout his time at Iowa.

Outlook
Horner will likely go undrafted, but will get plenty of chances to find a niche through workouts and summer leagues. He should play in the Portsmouth Invitational Tournament, and depending on his play in the PIT and March Madness, possibly the Orlando pre-draft camp as well. Fresh off leading Iowa to the Big Ten Conference Title, Horner may be able to put himself into the second round of the draft if he continues his solid play. Because of his lack of a first step offensively, a rarity for NBA point guards, he may not fit into the systems of many teams. Finding the right niche will be crucial to his success.

The right niche for Horner may be tough to find. His weaknesses with a first step need to be compensated by his teammates. This means having swingmen who have the ability to penetrate to create, covering up his weakness. An ideal situation, for example, would be alongside Larry Hughes and Lebron James in Cleveland, where Horner could stick to what he does best: running the break, managing the game, and hitting spot-up threes. Another unique situation that could work would be in Phil Jacksons triangle offense, where the point guards primary role in the half-court is to hit spot-up threes. This would allow Horner to thrive in the half-court hitting outside shots while still being able to make use of his court vision on the break, as Phil loves having his team run when possible.
Read full article