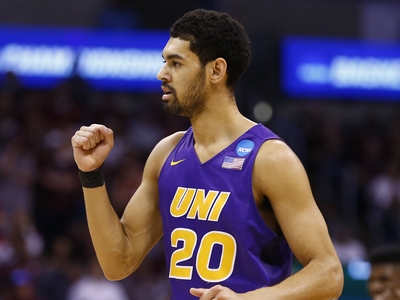 We'll look at both upperclassmen and underclassmen, analyzing players who are intriguing for the 2017 Draft, as well as prospects who need more time to develop, but could be intriguing in the future. This week we break down Northern Iowa's Jeremy Morgan, who plays in the Missouri Valley Conference.

Senior wing Jeremy Morgan has shown a steady course of development throughout his four-year college career under Ben Jacobson, making a significant jump each and every year  as evidenced by his 11.7 PER as a freshman, 17.0 PER as a sophomore, 22.0 PER as a junior, and now 29.3 PER as a senior.

Morgan had tremendous success at the High School level at Iowa City West, where he won back-to-back state championships, was the 2013 Iowa Gatorade Basketball Player of the Year, and also earned honors as an all-state wide receiver. He comes from a basketball family where his father played collegiately at the University of Iowa and his mother at Drake University. Morgan is a true coach on the floor and it's his intangibles and role player mentality that could very well vault him into the NBA conversation.

Through 12 games this season Morgan has shown several different aspects of his game that in total make him an NBA prospect. Offensively, his most translatable NBA skill is his catch and shoot stroke. His 3P% has increased considerably from his freshman season, and he is shooting 39% from deep this year on six attempts per game. While other aspects of his offensive game remain a work in progress, he has found ways to contribute as a rebounder, distributor and defender. He has a tremendous feel for the game offensively and plays with tremendous energy on the defensive end  he is only one of three players in the country to be averaging at least 2 steals and 1 block per game.

Morgan doesn't have elite size or explosiveness for an NBA wing, at 6' 5 with a good not great frame, and his skill set is more on the small forward than two guard side, but he has shown a great deal of improvement during his college career. He is a high IQ player, and a winner with great intangibles, who could potentially have some success at the D-League level and work his way on to an NBA roster.
Read full article