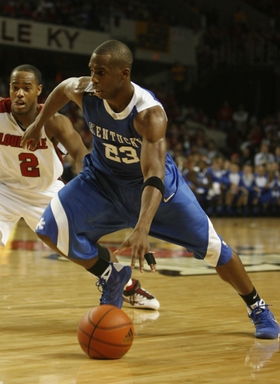 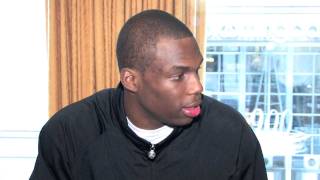 Matt Williams
@DraftExpress
Jodie Meeks situational statistics are pretty impressive to say the least, as he not only was a very high usage player at Kentucky, but also was extremely efficient at that.

Meeks ranks third in possessions used per game at 21.1, and second in overall efficiency with 1.06 PPP. Meeks catch and shoot ability looks a lot like Thorntons, only he takes more open shots and forces less. He can hit tough shots, but is not as deadly as you might think when left open, at just 1.21 PPP. Unlike Thornton, Meeks is quite a shooter off the dribble, scoring .99 PPP on 4.7 pull up jumpers per game. His 1.11 PPP in spot up situations is above average, an indication that his ability to hit the three somewhat compensates for his inefficient in other areas.

Meeks didnt get many touches on isolations or pick and rolls, but was relatively efficient in both situations. He ranked second in transition possessions per game at 5.5, and was slightly above average at 1.2 PPP looking good in the open floor. His ability to finish around the rim came out a bit better than we might have anticipated, as he both got there often (4th most), and was ranked 2nd in completing plays once there, at 1.2 PPP. He also showed the very valuable ability to do some damage coming off of screens in half court sets, scoring 1.04 PPP on a third ranked 2.9 shots off of screens per game. Turning the ball over on a little more than a tenth of his used possessions, Meeks didnt score quite as frequently as some of the other players on our list, but his three point shooting prowess helped him look very solid in this analysis.
Read full article

Joseph Treutlein
@DraftExpress
After being plagued by injuries throughout his sophomore season, Jodie Meeks is having an absolutely outstanding junior year. Going from averaging a meager 8.8 points per game last season, he has nearly tripled his scoring average to 24.2 points per contest. Equally as impressive is the substantial improvement that he has shown across the board in the areas of field goal percentage (+15%), three point percentage (+10%), and free throw percentage (+11%).

Meeks is a bit on the small side for a shooting guard at only 64, and is not an exceptionally long player. Powerfully built, he owns very nice strength for a guard, but is not an elite athlete by any stretch. His lack of size, length, and athleticism will likely hurt him when evaluating how his physical tools may translate to the next level as an NBA draft prospect.

The bread and butter of the juniors game is unquestionably his ability to shoot the ball from the perimeter. He is comfortable both coming off of screens and shooting from a standstill, getting the ball off with relative ease and doing a nice job of reading what the defense gives him. Meeks shot is fluid with a nice release, also having legit range beyond the NBA three point arc. He has established himself as arguably the top shooter in the SEC (along with Arkansas sniper Rotnei Clarke) and one of the elite shooters in the entire NCAA with his performance thus far this season. He currently ranks 3rd amongst all prospects in our database in 3-pointers made, and is the 12th best shooting guard in true shooting percentage.

Aside from Jodies ability to shoot the ball, his offensive game is fairly limited. He struggles to create separation off of the dribble, only possessing an average first step. Not coincidentally, he settles for a number of tough pull-up jumpers, though he very often makes them. The swingmans limited ball-handling skills dont particularly help him in this area either, as you will rarely see him get all the way to the rim in half court situations.

On the defensive end, there is a considerable amount of improvement that needs to be made if hes to see minutes in the NBA. He is not incredibly quick laterally, and often finds himself completely out of position on this end of the hardwood. Meeks does a very nice job of getting in the passing lanes and creating deflections, although this is primarily due to his tendency to gamble so much defensively. This is an area of his game that he will need to work on considerably before he takes his game to the next level.

Meeks statistical production at the highest level of college basketball and perimeter shooting ability are two things that immediately make him a player to keep an eye on. Though he isnt an elite draft prospect, he is certainly a player who will certainly be scrutinized by NBA teams. Should the NBA not work out, he is likely to have a very successful career in Europe, where his skills might be better appreciated.
Read full article