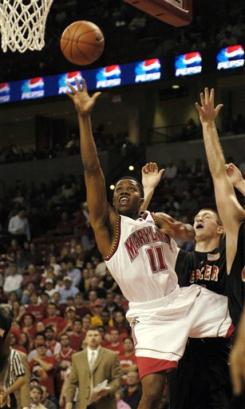 Strengths
At 6-2 ½, Gilchrist has good size for the PG position with a pro body and excellent strength. He is a fantastic scorer that can put the ball in the hoop from anywhere on the court when he is on. Gilchrist is a solid ball-handler with a very strong crossover, which he uses to get into the lane at will at the college level.

He has excellent footwork on both ends of the court and his herky-jerky style of play makes up for his average athletic ability and makes him a tough player to guard when you factor in his strength. His footwork and strength along with his tenacity help his out tremendously on the defensive end of the court, but only when he is really trying.

Gilchrist actually has good court vision and passing ability, he just barely every uses it. Hes very solid on the drive and dish for example, but only if his shot isnt there. His perimeter stroke can be very good from outside, but only when he isnt abusing it. Hes a very good mid-range shooter who owns a quick release on his jump shot. Gilchrist can heat up quickly from outside, and when that happens he is extremely tough to guard as he can score on you from any spot on the court basically. Gilchrist is a fiery competitor who plays the game with a lot of emotion, for better and for worse. His skill level is high, but his mental capacity appears to be low. He makes hard things look easy and easy things look hard.

Weaknesses
Gilchrist is only an average athlete compared with NBA PGs, which means that it will be that much harder for his game to translate over to the pro level where he wont be able to get into the lane as easily.

His main problem relates to his position on the court, though. Gilchrist is much more of a scorer than he is a playmaker, and he encounters a lot of trouble controlling the tempo of the game. He doesnt ever seem to have much faith in his teammates, and therefore takes way too much on himself, which drove his Coach Gary Williams at Maryland up the wall. He could have serious problems keeping his teammates and coaching staff happy as he goes through too many possessions where he is the only one touching the ball, just looking selfish and disinterested in the team concept. His shot selection needs serious work, too many times hell just bring the ball up the court and heave up an ill timed three pointer without even looking in the direction of his teammates. His decision making can be truly horrendous at times. Although he is very talented, he is still an extremely streaky scorer. He will erupt for 15 points in 3 minutes and then not score a point for the rest of the game.

Although he can be an outstanding defender when he wants to, he showed very little interest in doing so in his time at Maryland. He gambles way too much in the passing lanes and gets torched too often on the perimeter.

The most concerning thing about Gilchrist is how hell be able to fit onto his team off the court and in practices. There was a lot of noise coming out of Marylands lockerroom all year long and its unclear what kind of affect that will have on his draft stock. A couple of short, but alarming incidents happened at the Chicago Pre-Draft camp that make you wonder about his ability to interact within a team concept.

Consistency has been a major issue for him throughout his career. Gilchrist is a player who goes through unbelievable stretches of ups and downs, to the point that you never know what you are going to get out of him next. His team clearly suffered the consequences from that, beating Duke twice but also losing to Clemson three times. He became such a distraction that it reached a point that they just sat him down during the NIT and didnt play him at all. Sometimes he looks extremely quick, focused and athletic while in other instances he looked sluggish and completely dazed, making questionable decisions that make you wonder at times what is going on inside his head. His body language can be very poor and his intangibles extremely questionable.

Gilchrist was the leader of a very talented team that badly underachieved in his junior year, missing the NCAA tournament altogether after being ranked early on in the top 20, something that also needs to be taken into consideration as well.

The bottom line is that it's unclear whether his talent level makes up for his excessive baggage. NBA teams are sometimes willing to roll the dice on a troubled, but talented player if they think there is enough potential for reward in the future, but at a certain point they just lose interest because there becomes too much potential for distraction there.

Outlook
Gilchrist hired an agent and looks to be drafted somewhere in the 2nd round, with an outside shot of going undrafted if his baggage scares off too many teams.
Read full article