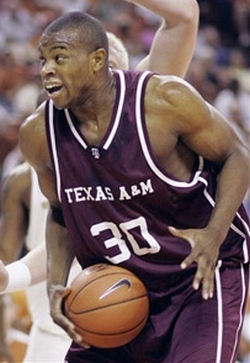 Jonathan Watters
@DraftExpress
After an underwhelming performance yesterday, Jones played with a better overall effort today. From early on in the game, he established himself as an inside presence. On back to back plays towards the end of the first half, the Texas A&M junior provided a great effort while collecting two offensive rebounds in the paint and putting them both back into the basket. The inside play allowed Jones the room to show off his range on the offensive end as well. This was particularly evident on pick and roll plays, where he was able to step out a couple times and knock down the open jumper. When playing with effort, Jones rebounds the ball very effectively as well.

A lingering area of weakness for Jones remains at the free throw line, where he only shot 55% this season. He has the proper mechanics and release point to become more than acceptable from the charity stripe, but he consistently overshoots the ball from this area. Jones also needs to play with better effort on the defensive end, but he does a good job of using leverage to bang with opposing players in the post.

Joseph Jones will benefit greatly from another season in College Station, but he has nothing to lose by testing his stock this year. He could be a serviceable big man off the bench in the NBA, and a season as a go-to scorer may help drastically with his development.
Read full article

Joey Whelan
@DraftExpress
Texas A&M has relied on solid frontcourt play throughout the season, but generally lacked one consistent performer from their rotation of big men. Against Memphis, the lack of rebounding killed A&M during crunch time, and ended what has been a great run for the Aggies this season. Joseph Jones provided strong scoring early for Texas A&M, but was absent during crunch time when his team needed him the most.

Early on in the game, Jones displayed good potential on the offensive end. He posted up from about 15 feet away from the basket, and hit two turnaround jumpers over the bigger and more physical Joey Dorsey. From the post, footwork appears to be a big strength for him, as is the soft touch on his jump-shot. Jones also hit two hook shots on the low block, with one of them coming during a key possession late in the game.

Against Dorsey, Jones struggled when it came to defense and rebounding. He fights for position well, and most of the rebounding fundamentals seem to come naturally to him. The problem here is that Jones lacked the lower body strength to push Dorsey away from the basket. Another problem that limits him as a rebounder is the fact that he doesnt jump after he gains position. This weakness really stood out towards the end of the game, when Memphis was able to pull down 3 offensive rebounds that eventually led to the go-ahead free throws.

Jones seems to lack some effort at times, and has only looked good in about 1 out of every 5 games for Texas A&M this season. He will certainly need to return to College Station for his senior season, and emphasize playing with a better motor on both ends of the floor. Joseph Jones has some tools that could end up landing him a job in the NBA, but further progress in other areas will be necessary before we see somebody who can certainly project to next level.
Read full article

Joseph Treutlein
@DraftExpress
After being nominated to an All-Big 12 Second Team and playing a huge role in getting the Aggies back to the Big Dance, there is a lot of pressure on the junior inside player of coach Billy Gillespie.

Calling him not a Power Forward and not a Center, but an "inside player" does have a good reason. Jones who plays as a center for his team, won't be able to that at the next level, mostly due to his lack of size and limited athleticism. He is able to score consistently in college around the rim, using jump hooks or just overpowering opponents and going strong to the rim. Even if his upper body is strong and he is not afraid of making contact with defenders, he lacks strength in his lower body. This lack of elevation prevents him from finishing in traffic, as well as from scoring over defenders, particularly if there is no defensive reaction to his pump-fakes and he has to shoot on his second or third effort. Getting a few pounds off his wide body could make some difference here, and it would also help his stamina, since he looked exhausted a few times during the last minutes of close games.

Jones made 74% of his free throws last year, which is a good result for an interior player. It usually suggests that the player can nail mid-range jumpers on a consistent basis. Unfortunately Jones is not there right yet - he knows how to repeat his free throws motion regularly, but his bad shooting mechanics stop him from making a baseline or straight-away jumper during live games. But we are quite optimistic about him adding this element to his repertoire soon.

Even not being able to shoot from 10 feet or further from the rim right now, Jones has some other tools to expand his offensive game. He is a surprisingly good ball-handler and also has a nice first step off the dribble. Combining it with decent passing skills and an ability to read defenses, Jones has a chance to become a much better face-up player, which would tremendously help his chances of being drafted.

And last, but not least - his defense. Jones has a really long way to become at least a decent defender. He is good in rotating from the weak side, and his big body frightens some opposing players from going straight to the rim. But if they decide to do it, he is not able to stop them, making only 16 blocks in 30 games during last season, which for a 6'9 player who spends 29 minutes per game on the court, is an awful, awful result. His rebounding and blocked-shots statistics were down last year compared to as a freshman year, probably because he focused more on an offensive end. He needs to bounce back his production in these areas, or Texas A&Ms interior defense will be non-existent and his chances of being drafted probably won't get higher than as a 2nd round pick.
Read full article

Jonathan Watters
@DraftExpress
The highly touted Jones was a big flop today against LSU, playing only 18 minutes because of fouls picked up due to his inability to guard LSUs talented duo of Tyrus Thomas and Glen Davis. When in the game, the Aggie sophomore was frustrated by the more athletic Thomas and the stronger Davis, reverting to soft turnaround jump shots instead of his usual power game. Even Josephs high point of the game, his late game lay-in, was blocked into the basket by Tyrus Thomas.

After this performance, it should be a no-brainer that Jones returns to the Aggies next year. While he did have an impressive sophomore campaign, the Texas native still has a ways to go before he should consider entering the draft. Being an undersized power forward at only around 6'8 or so who plays below the rim, after another year of development and more emphasis on rebounding we might be able to talk about Jones as a prospective NBA player. Right now, though, those talks are a bit premature.
Read full article

Eric Weiss
@DraftExpress
A rugged throwback pivot, Jones is one of the main reasons Texas A&M has even surprisingly gotten this far after losing Antoine Wright to the NBA draft last summer. His mid-range shot and aggressiveness have improved since his freshman season, and his free throw percentage has improved a full 11% from last season. Despite having a wide frame, Jones is just an average athlete who plays the game below the rim. He is a very tough player, who doesnt mind taking contact in the post. Though Jones has the game of a center, his size will force him to the power forward position if he is to make it in the NBA.

For Texas A&M to succeed in the NCAA tournament, Joseph Jones needs to be a big time force in the post. They especially need him to draw fouls and get to the free throw line, as he has done in many wins this season. An area Jones must improve in for A&M to win some tournament games is rebounding. He has only had 5 games this season of double digit rebounds, so if he can find a way to rebound out of his area against a big and fairly athletic Syracuse team, Jones will greatly improve his teams chances of winning. Joseph Jones still has 2 years of eligibility remaining to improve his game, and it will be interesting to see if he can make some improvements to overcome his lack of height and athleticism.
Read full article