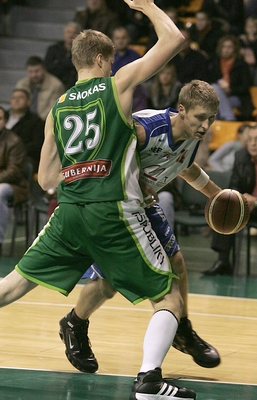 Luis Fernández
@DraftExpress
Kaspars Berzins, who had his Baltic League season-high scoring with 23 points in the loss against the Lithuanian powerhouse Zalgiris, while rounding out his performance with 5 rebounds and 3 blocks. Coincidentally, he had achieved his season-high in rebounds in the previous game, with 14 captures against ASK Riga. Hes averaging this season 10.2 points and 4.8 rebounds in this competition.

Berzins is a skilled seven-foot center we had the chance to watch last June in the Reebok EuroCamp in Treviso. If he stood out there, it was only because of his softness; the aggressive and competitive nature of the EuroCamp exposed Kaspars biggest flaw. Its pretty obvious that the Latvian big doesnt feel comfortable going against physical defenses or dealing with contact. In the Baltic League he gets along better with this problem, but still he tends to avoid physical contact in overly relying on his perimeter skills. Actually, Berzins is a nice spot-up shooter from the three-point line; indeed he went 3/6 in the aforementioned game against Zalgiris. He has a fluid release and achieves a pretty decent 38.5% this season.

But Berzins enjoys good conditions to play inside and be an effective player there. Hes a long guy, with a nice wingspan; hes also fairly athletic considering his size, showing good mobility and some leaping ability; and he shows some strength, with a well-built body that should be able to assume more weight. Actually, when he shows good enough will, he consistently gains position in the low post to receive the ball. Depending on how physical his match-up plays him, he feels more or less comfortable operating in the paint, but he doesnt look bad, being able to put the ball on the floor, showing some moves and a nice ability to finish near the basket. He regularly enjoys clear size superiority, and hes skilled enough to cash in off that advantage. But again, its not that usual to see him asking for the ball in the paint. As a very mobile and nicely coordinated big player, Berzins has the tools to become an effective pick-and-roll player. However, you also need the aggressiveness to attack the basket, and thats not a given with him. Indeed, he often opts to roll outside for pick-and-pop opportunities. In terms of his basketball IQ, he looks just decent.

On defense, Kaspars still doesnt manage to provide a consistent display. Again his conditions are terrific for this department of the game. He has a nice body, the length to intimidate, and the mobility to provide help on different fronts. However, his struggles here are not as related with aggressiveness (even if its part of the equation) as they are with his poor decision making on the defensive end. Berzins doesnt fully control his efforts and impulses, so he gets fooled by fakes from time to time, commits unnecessary fouls (getting in foul trouble too often) or shows poor timing. Considering his length, neither his rebounding (4.8 per game) nor shot-blocking numbers (1.1 per game) look great. Besides, his defensive rotations are also rather mediocre. Still he shows decent activity and might be able to become a solid defender once he figures out how to make the most out of his physical gifts.

Born in 1985, Berzins will be automatically eligible in next Junes draft. We dont expect to hear his name called, but since hes a seven footer with some intriguing characteristics, you cant rule out anything.
Read full article