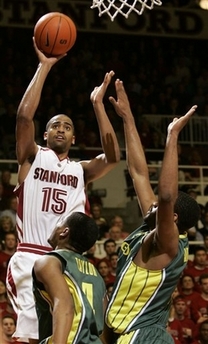 Joey Whelan
@DraftExpress
After a breakout sophomore season, many were expecting Lawrence Hill to pick up right where he left off as a junior. Things didnt quite work out that way, as Hills numbers went down across the board in both production and efficiency. With the Lopez twins coming into their own last season, Hills role took a large turn from what it was the season prior. In 06-07, he rarely saw his minutes dip below 28 per game, but in 07-08, the varied wildly from the teens to the low 30s, with his place in the starting lineup also changing from night to night.

In analyzing the numbers provided by Synergy Sports Technology, the distribution of how Hill got his scoring attempts barely changed from his sophomore to junior season. However, his efficiency in jump shooting and post scoring both fell off significantly, which is why his FG% dropped from 51% to 41%.Hill netted 1.25 points per possession off jump shots as a sophomore, but fell to 0.96 as a junior. Likewise, he netted 1.04 PPP in the post as a sophomore, but just 0.40 PPP as a junior.

Watching extensive tape of his jumper from the two seasons, there really isnt much noticeable change in his mechanics or execution. He has a great natural touch, but hes always had somewhat of a loose form, taking a fair share of off-balance and fade-away shots, and not always bringing the ball up from the same place. That said, he has a quick and high release with a pretty consistent release point. In all likelihood, Hills shot isnt as good as it appeared to be in his sophomore year, and isnt as bad as it appeared to be in his junior year.

In the post, Hill just appeared to be really out of his element this season, not establishing good position, not selling his moves well, not looking very decisive, and often ending up taking a shot that didnt like much more than the ball being thrown in the general direction of the basket. He also didnt do as good of a job taking advantage of mismatches this season, taking smaller players to the post much less frequently. On the contrary, Hill does do a good job on the offensive boards, though, showing good timing and mobility, often streaking in from the wing to pull down a board from out of position.

One area where Hill did show progress is with his dribble-drive game, as he looked a bit more comfortable putting the ball on the floor this year, occasionally mixing in crossovers and spin moves, and showing flashes of taking his man both left and right. With his long strides and decent quickness for his size, Hill is becoming a much more formidable threat in this aspect of his game, though his handle is far from a finished product, still looking high and sloppy at times, while his ability to change directions with the ball still isnt perfected. At the rim, Hill isnt the most creative player, but has good touch and can go to lay-ups, floaters, and runners to get the job done, or even the occasional dunk, though he doesnt have the body to power up over players very much.

On the defensive end, Hill is very much a tweener at this stage, not having the body to really challenge opponents in the post, and really lacking the lateral foot speed on the perimeter, getting beat frequently. Despite his length, he usually isnt even able to recover in these situations, and his perimeter defense is a major concern in his efforts to convert to the small forward position.

With the Lopez twins gone this season, Hill will have a chance to reclaim his starring role for the Cardinal, and should once again have consistent minutes and touches in the rotation. This season he should look to return his shooting efficiency to what it was as a sophomore, and continue to improve on his dribble-drive game, which will be important for him to make it at the next level. He is someone who could come into second round discussions come draft time, and will be someone scouts and executives will look to see at the pre-draft camps.
Read full article

Joey Whelan
@DraftExpress
Hill was one of the more improved players in the country last year, increasing his scoring output by 11 points from his freshman to sophomore campaign. Playing for the Cardinal, he is placed in a situation that benefits him greatly in terms of showing NBA scouts his full arsenal of skills. For most teams, Hill would be used as a power forward, but due to the presence of two seven footers in the starting lineup (the Lopez twins), he is able to play outside on the perimeter much more. Making the most of this opportunity, he shot a sizzling 41% from beyond the three point arc as a sophomore for Stanford.

Standing only 6-7 or 6-8, Hill is undersized for the power forward position, yet not fully developed as a small forward. He is able to shoot the ball with consistency beyond the collegiate three point line, although his mechanics could use some refinement. The junior forward causes match-up problems, scoring against bigger players from the perimeter, while taking smaller defenders down to the low post. He does an excellent job of exploiting mismatches, often relying upon short pull-up jumpshots when unable to get all the way to the rim. Clearly Hill is a player who knows his limitations on the offensive end, and his molded his style of play to cater to his strengths.

Although he played the small forward position the vast majority of time he was out on the floor, Hill is not a very creative player, as far as his one on one skills are concerned. His ball handling and passing abilities are limited to say the least, as he looked uncomfortable any time he put the ball on the floor more than two or three times last season. The All PAC-10 Team selection struggles with passing the ball into to the post as well, frequently being unable to enter the ball in from the wing and/or turning the ball over.

Defense is one area of the game that Hill has shown to be awfully cerebral in, despite his physical limitations. Not the quickest player laterally, he makes up for his lack of speed with knowledge of how to actually play team defense. His physical liabilities hurt him especially when guarding players on the perimeter, and Hill is a much more adept defender in the post, displaying nice toughness and rebounding talents.

While Hill does not have the upside of many of the players ranked above him in this conference, he is more productive then the large majority of them. His lack of ideal size and athleticism make him a more marginal prospect than some of his more hyped counterparts, but at the end of the day, Hill is still a player that NBA personnel will need to monitor closely to evaluate the progress of his perimeter skills.
Read full article

Jonathan Watters
@DraftExpress
The role of the Lopez twins in Stanfords mid-season emergence has been discussed at length here at DraftExpress, but the freshman 7-footers arent the only draft prospects in Trent Johnsons frontcourt. Sophomore forward Lawrence Hill has quietly emerged as one of the elite players in the Pac-10, leading the Cardinal in scoring at 16.1 ppg, and stretching defenses all season long with a beautiful midrange jumpshot.

Hill is somewhat of a jack-of-all-trades when it comes to scoring, as he began his career as more of a post-oriented player, but has taken his game outside more and more. With a formidable wingspan and lanky build, Hill is more than capable of playing either forward spot at the college level, becoming a master of understanding how to best take advantage of individual matchups or situations. His bread and butter would be a beautiful, high-arcing jumpshot that he can hit in a variety of situations. A phenomenal spot-up shooter from just about anywhere, Hill is especially effective hitting off balance leaners, fadeaways, and baseline pull-ups in the midrange. He doesnt have the look of a typical shot-creating wing, but lets the game come to him and wont hesitate to pull the trigger if given a reasonable amount of space. He has enough toughness, athleticism, footwork and touch to be a threat in the post, and his ability to drive on perimeter defenders appears to be improving. Hill does a great job of using his length to hang in the air, fade away, and generally sneak his way around defenders to the get the ball to the rim.

While Hill is probably capable of scoring in some way on just about any potential defender in the Pac-10, the NBA will be a different story. His mobility and comfort level on the perimeter is certainly improving, but he still has work to do in order to become a full-time wing. He rarely handles the ball unless putting it on the floor for a straight-to-the-basket slashing move, and just doesnt move quite like a natural perimeter player. He needs to continue to make major strides in his perimeter game over the next two seasons if he wants make a complete transition in terms of NBA aspirations. Hills long arms and workmanlike mentality will certainly help him out defensively, but he is still very much a tweener on that end of the floor as well.

Lawrence Hills NBA future is far from set in stone, but the sophomore is developing quite rapidly and has 2+ seasons to work on moving out to the wing full time. While some aspiring power forward prospects may have taken the arrival of two 7-foot freshmen like Brook and Robin Lopez as a negative, Hill has managed to make the most out of the situation. He is certainly athletic enough to play small forward in the NBA someday, and his instinctual shooting form is something he should be able to hang his hat on. With Stanfords roster likely to remain intact through 2008, it would appear the program has a bright future. Lawrence Hill is certain to play a big role in this, and with continued development, appears to be on track for an NBA career someday himself.
Read full article