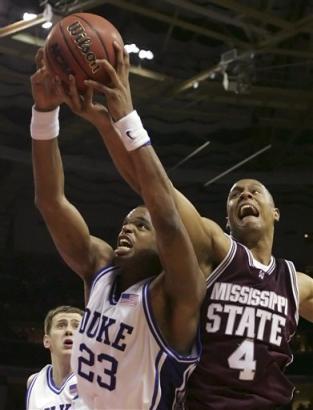 Strengths
Roberts is a prolific and consistent NCAA big man who has put up solid numbers for his entire four years in college. He is a 6-9 fundamentally sound PF who came very close to scoring 2,000 points in his NCAA career.

Offensively, he has terrific hands and excellent footwork in the post, combined with a very soft touch around the basket. He runs the court well and does a lot of different things for his team. He is an outstanding rebounder at the college level, thanks to his fundamentals and excellent positioning, to go along with a knack for anticipating where the ball will end up. Roberts has nice mechanics on his shot, with a high release point that makes it very hard to block. He has range out to the college three point line, although he sometimes tries too hard to prove that. His handle is decent, but nothing really to write home about because he lacks quickness and explosiveness.

Roberts is a smart, patient player who understands the game of basketball and knows how to play it. He has good court vision and passing ability and has no problem passing the ball if his shot isn't there. He is the type of guy you could say lets the game come to him. His character is strong and he is a very experienced player who is ready to step in and play from day one.

Weaknesses
Roberts does a lot of things well, but nothing really great as far as the NBA is concerned. He just doesn't stand out in one particular area.

His biggest drawback is the fact that he doesn't have any of the following: great size (at a legit 6-9), outstanding athleticism (he is just average here), strength (see links for his matchup with Shelden Williams in the NCAA tournament), length, good man to man defense, or a big upside to significantly get better. He averaged 16.6 points as a freshman, and 16.9 points as a senior, on similar percentages, so teams will likely wonder how much he has left to improve?

He is not an explosive player by any means, and this comes to play in the way he finishes around the basket, struggles to create anything off the bounce from the perimeter, and the fact that he's a mediocre shot-blocker.

When is overmatched in the paint (and this will happen quite a bit at the next level) he will usually float to the perimeter where he does not excel as much as he should to put this concern to rest. He has a decent jump-shot if he is open, but he abused this all year to try to show the scouts something that just wasn't there, and his percentages suffered (29% for 3). He isn't the most contact-loving player in the world either, lacking some fire in his game and getting a bit passive when things aren't going well for his team.


Competition
Started off his career at Baylor (Big 12) and averaged 16 and 8 his first year and then 15 and 10 his second. After the Baylor tragedy (google it if you want more info) he transfered to Mississippi State and did not have to sit out a year because of the unusual circumstances. His teammate John Lucas transfered to Oklahoma State in similar fashion.

Roberts was the SEC player of the year in his junior season, and helped Mississippi State to an outstanding season and a very high seed in the NCAA tournament. They ended up getting knocked out by Xavier in the 2nd round which was an upset with Roberts having a fairly average game by his standards (11 points, 4-11 FG, 7 rebounds).

This year, Roberts was suspended for the first few games of the season after it was revealed that he allowed the Portland Trailblazers to pay for his flights to come workout for them. Later on in the season he probably wasn't ever completely healthy, and his team had a very poor 2nd half of the year and backed its way in to the NCAA tournament. They ended up suprisingly blowing out Stanford in the first round, with Roberts having a very good game with 23 points and 14 rebounds. In the 2nd round they were matched up with #1 seed Duke, and fought till the very end before eventually losing 63-55. Roberts was matched up with fellow NBA draft prospect Shelden Williams and from what it looked like to me lost in that individual battle (see links: NCAA tournament day 2), although some would disagree. He finished with 17 points (5-18 FG) 11 rebounds and 4 blocks in that game.

Outlook
Last year Roberts declared for the draft without an agent and went to the Chicago pre-draft camp (see links) to test his stock. The results were somewhat mixed, and with his stock hovering around the late 1st-early 2nd he decided to come back for another year. Not to pile it on or anything, but I would love to hear his thoughts on how what happened last year looks to him in hindsight.

After a semi-disappointing year (not really in terms of production, but just in the fact that he didn't do much to improve his stock) he is probably still a 2nd round pick, although he might be able to slip into the late 1st if he has a great showing in Chicago or something like that. How the 2nd round pans out is anyone's guess, so not even that is guarantee at this point.

Facts
Nephew of sportscaster Robin Roberts from ESPN and ABC. One of the 20 finalists for the very prestigious Naismath National Player of the year award. Transferred to MSU after a bizarre summer at Baylor where one of his teammates, Patrick Dennehy, was tragically murdered by another member of the team.
Read full article