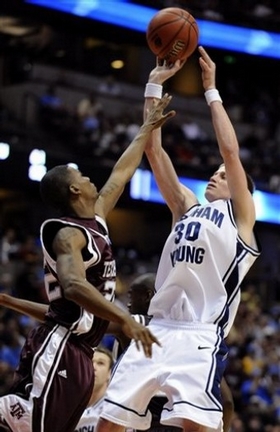 Jonathan Givony
@DraftExpress
One of the most efficient players in the country had easily his worst shooting games of the season here against Wake Forest, going a miserable 6 for 20 from the field. The heady senior still managed to make his presence felt getting to the free throw line 7 times, scoring 17 points, pulling down 8 rebounds and dishing out 3 assists, which is very typical of the type of player he is.

Even after his frustrating night against Wake, Cummard still ranks as one of the most efficient players in college basketball. He continues to lead the nation in true shooting percentage, thanks to the outstanding 58% he shoots from the field, as well as 41% from beyond the arc and 80% from the free throw line.

Cummard has an absolutely beautiful stroke from the perimeter, as well as a lightning quick release, being capable of setting his feet and shoulders instantaneously to get his shot off. He is much more than just a spot-up shooter, looking very comfortable coming off screens, and also doing an excellent job knocking down shots off the dribble after creating space. Cummard is not one-dimensional in the least bit (only 25% of his attempts come from beyond the arc) as he is very effective taking his man down to the post, showing nice footwork, great smarts using his body to create space, and a beautiful turnaround jumper, and also being able to get to the hoop off the dribble using either hand showing above average ball-handling skills. He is very smart moving off the ball, executing impeccably within his teams half-court offense, and can create opportunities for his teammates as well with his solid court vision and passing skills. All things considered, Cummard might be one of the toughest players to defend in college basketball, given the multitude of ways he can hurt the opposition.

Beyond his excellent skill-level, Cummard is a real competitor, something that we were able to witness up close and personal due to our terrific vantage point in this game. He is extremely tough despite his frail frame, and is much more active looking to make his presence felt than his super-efficient numbers might lead you to believe. He took responsibilities on the court and was the absolute man for BYU in the clutch, being a little bit unlucky in this game to see some very makeable shots not fall for him, which was pretty surprising. Look no further than the excellent rebounding numbers Cummard puts up at the small forward position to see how tough and active a player he is. Hes the type of player who is always around the ball and gets his fingers on pretty much everything in his area, often winning his team extra possessions in the process.

Defensively, Cummard struggled at times matching up with a hyper-athletic combo forward like Al-Farouq Aminu, who was not shy about taking him down to the post. His lack of strength and lateral quickness limits him to a certain extent at the next level, but he is really smart and intense on this end of the floor, knowing how to use his terrific timing and length to contest shots effectively and eventually emerge as a pretty solid defender at the college ranks.

Definitely not the exact prototype for what the NBA is typically looking for in a wing player, Cummard appears to bring enough to the table to compensate for his shortcomings, and should be able to carve out a niche for himself in the league if he manages to land in the right situation. Players with his skill-level and all-around versatility surely do not grow on trees, and there are definitely a number of coaches in the NBA who can figure out a way to utilize him.
Read full article

Joey Whelan
@DraftExpress
After an incredibly productive junior season, Lee Cummard will look to take his game to the next level as a senior. This wouldnt be surprising given the way hes steadily improved his game in each of his three years at BYU, with his numbers rising across the board each year.

The 67 swingman with a very slight build is a below average athlete by NBA standards, not showing great quickness or vertical explosiveness, but he makes up for it with fundamentals and intelligence. Hes a bit awkward in his movements as well, reminding of Adam Morrison in the way he moves around the court, though his style of play differs greatly, having little flare for the dramatic, making his mark through efficiency and simple plays, which he very much excels with. Cummard was remarkably efficient scoring the ball as a junior, hitting for 57% from the field, 86% from the line, and 47% from three, for an outstanding 69% TS%. By numbers alone, he had a case already last season to be considered the top small forward in the 2008 draft. Very few players bring to the table his combination of rebounding, passing, decision making and shooting efficiency.

On the offensive end, Cummards greatest asset would have to be his jump shot, which has a compact, textbook motion. He has a high, quick, and consistent release, with a slight fade to his shot, and hes capable of hitting it spotting up or coming around screens. He can stop to catch and shoot from full speed when running in transition, and truly does an excellent job of squaring his body no matter what angle hes catching the ball from. Hes equally effective with his shot from two and three-point range, hurting the defense from 5 feet out all the way to NBA three-point range. He does a very good job coming off screens in the mid-range area, either catching and shooting or cutting to the basket. He also has a nice turnaround jumper in the mid post that he goes to frequently.

Cummard doesnt have much of a dribble-drive game, though he does have decent ball-handling skills, keeping the ball low to the ground and mixing in some basic crossovers when necessary. Due to his lack of quickness, he isnt able to take his man off the dribble often, but he looks comfortable with the ball in his hands. Cummard does get to the rim, though, either leaking out in transition or making cuts without the ball, always remaining in constant motion. Cummards a very smart player on the offensive end in general, always playing a smart team game, getting open, not forcing shots, and making good passes, to the tune of 3.5 assists per game.

Defensively, while not great with his lateral quickness, Cummard has a good fundamental stance and shows very good focus and reflexes, which allows him to stay in front of his man more than youd expect upon first glance. Many of the question marks hell face from NBA decision makers will come on this end of the floor, meaning he still has quite a bit to prove here.

While Cummard had an excellent junior season by any standard, its definitely concerning how his production fell off against schools from major conferences, with him scoring just 10.5 PPG against Louisville, UNC, Michigan State, and Texas A&M last season, down from his full season average of 15.8. Its definitely reasonable to wonder how his offensive game will translate going against better athletes and bigger opponents night in and night out, and considering that he turns 24 by the time the season is over, he probably doesnt share the upside of many of his counterparts in this years draft.

Looking forward to the NBA, its certainly feasible to see Cummard catching on as a role player in some capacity, and he could even be drafted, but much will depend on his performance this season, specifically against athletic wings, along with his performance in pre-draft camps after the season. Still, He will have a chance to open some eyes early on already with match-ups against Arizona State and Wake Forest.
Read full article