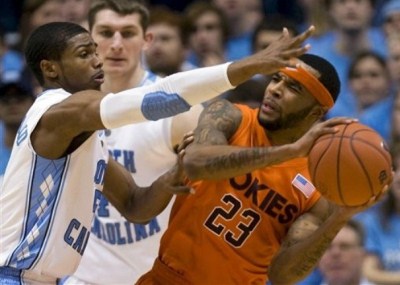 Joseph Treutlein
@DraftExpress
Arguably the most dynamic scorer in the ACC last season, Malcolm Delaney withdrew his name from the NBA Draft after discovering that he wasn't a likely first round pick. A known commodity with clearly defined weaknesses, the senior could improve his stock if he can show progress in some key areas and lead his team deep in the NCAA Tournament.

Delaney's weaknesses as a prospect are rooted in the ambiguity regarding his position at the next level. Standing just 6'3, Delaney is undersized for a NBA shooting guard, and while he has great quickness, he isn't a great leaper and needs to get stronger. Couple his physical profile with the fact that he uses his quickness to score more frequently than he does to pass and his sometimes questionable shot selection, and it is safe to say that anything Delaney shows as a floor general this season on top of what we've seen from him in the past will improve his stock.

Though Delaney is known on the national scene for his scoring prowess, he flashes some playmaking ability. He can get into the lane and draw addition defenders seamlessly off the dribble with his excellent first step. However, needs to do improve his left hand and do a better job of identifying when to give the ball up and when to keep it a tall order for a player who is naturally looking to score . Any time Delaney spends orchestrating Virginia Tech's offense this coming season will bode well for his future, as the experience he gains should aid him when he attempts to prove the he can assume the role of primary ball-handler on the next level.

In addition to his passing ability, it would be nice to see Delaney improve his offensive efficiency on the whole. Though it is his aggressive nature that allows him to light up the scoreboard against the NCAA's best, he's prone to force a few guarded jumpers from the perimeter every game and doesn't finish at the rim at a very good rate. He dones compensate for both of those limitations by getting to the line as much as anyone, but according to Synergy Sports Technology, he made just 35.3% of his jump shots last season and only finished 35.9% of his chances at the rim.

Virginia Tech's heavy reliance on Delaney to create for himself and carry his team through one of the toughest conferences in college basketball certainly plays into his lack of efficiency, but the guard does make some questionable decisions at times especially in the half court. A polarizing figure in the Hokie offense, Delaney's is asked to do a lot for his team, and ability to improve his consistency as a jump shooter and strike a balance between shot selection and passing will be a big part of his team's success.

Defensively, Delaney's quickness is an asset to him, as it gives him the ability to be a disruption in the passing lanes and deny penetration with some consistency. Displaying excellent anticipation when going for steals, Delaney is a solid on ball defender when he focused, but takes a few too many risks in pressuring the ball up near half court and reaching for steals. He'll need to add some muscle to his frame to improve his defensive potential at the next level and struggles to recover when he's beat, but has some useful tools should he get the chance to defend point guards at the next level.

Though Delaney may never be one to make the extra pass out on the perimeter, he'll need to become a more proficient floor general and perimeter shooter to compensate for the athletic shortcomings that will make it difficult for him to finish around the basket at the next level. There's no questioning Delaney's slashing ability and knack for getting to the line, but the rest of his game will be under the microscope this season.
Read full article

Joey Whelan
@DraftExpress
Fresh off an incredible week on both an individual and team level, this seems like as appropriate time as any to write about the exploits of Virginia Tech combo guard Malcolm Delaney. The Hokies scored one of the bigger upsets of the college basketball season thus far, knocking off Wake Forest on their home floor, and then followed that up with a huge road win over Miami in overtime. Delaney dropped a cool 50 points in those two wins combined, and has scored in double figures in every game thus far this season, en route to being ranked as one of the top 10 scorers in the ultra-talented ACC.

Delaney has good size for a combo at 6-3, as well as very nice athleticism. His frame leaves something to be desired, though, even if there is still hope that it may still fill out, as hes only 19 years old. Delaneys best attribute is probably his extremely quick first step, which allows him to create shots with either hand and really make a living at the free throw line. Delaney ranks in the top 25 amongst all draft prospects in most of the categories revolving around made free throws, as not only does he get to the stripe at a great clip, he also converts on 86% of his attempts.

More than just a slasher, Delaney is also a very capable shooter, both spotting up and pulling up off the dribble. 50% of his field goal attempts come from beyond the arc, and he makes nearly two 3-pointers a game, albeit at a somewhat pedestrian 35% clip. The fact that he isnt shooting a higher percentage probably has more to do with his shot-selection than it does with his shooting stroke, as he tends to settle way too often for tough contested looks early in possessions, which hurt his team as well as his individual percentages. Delaney regardless has shown a really nice feel for making shots from all over the floor, and as he continues to mature, could really develop into a lethal scoring threat.

Although hes been quite proficient in getting to the line, Delaney still leaves something to be desired in his ability to finish plays around the basket. His slight frame and just average vertical explosiveness make him a fairly poor finisher around the rim, which is one of the reasons hes shooting an inefficient 42% from the field this season. Getting a little tougher and craftier in his ability to convert in traffic will go a long way for the sophomore, although hes already showing quite a bit of promise with his very nice floater.

Playing both on and off the ball for Virginia Tech (he often starts at the point and then moves to the 2 later in the game to make room for 5-9 sophomore Hank Thorns), Delaney has been mostly a mixed bag as a playmaker this season. On one hand he is very proficient at creating off the dribble and getting the defense to rotate, giving him opportunities to find open teammates off the pick and roll or on cuts and simple drive and dish plays. On the other hand, his first instinct is clearly to look for his own shot, and this shows in his unimpressive assist to turnover ratio thus far, as well as the many confused possessions Virginia Tech suffers from. Delaney will pick up his dribble or throw the ball away for no particular reason on occasion, and his shot-selection as mentioned can be pretty poor.

Defensively, Delaney still has a long ways to go, even if hes shown some sparks of potential, particularly recently in Virginia Techs winning streak. He has good tools on this end of the floor, and can get stops when he puts his mind to it, but too often he loses focus and lets his man blow by him far too easily. Getting stronger should help, but becoming more intense on this end of the floor will probably help out the most, and also make him more attractive as a prospect down the road.

Right now, Delaney is clearly in the midst of a breakout season, despite the lack of national attention. His physical tools combined with his scoring instincts and production in the ACC should begin to draw him NBA attention fairly soon, even if he still has plenty of room to develop as a prospect. Becoming more mature, polishing up his ball-handling skills, improving defensively, and just becoming a more complete all-around player will go along ways in achieving this goal, but if he can find a way to really develop his playmaking skills, then he could really become an interesting player down the road.
Read full article

Eric Weiss
@DraftExpress
Delaney had a very good game from the field and took player of the game honors away from Donte Greene because of it. Delaney did most of his damage in transition with his passing and forays to the basket, but he showed a great outside shot that was falling for him all night. Hes slight of build and looks to shoot once the balls in his hands in the half court sets, but he did make a couple of nice kick out passes once he got into the lane.
Read full article