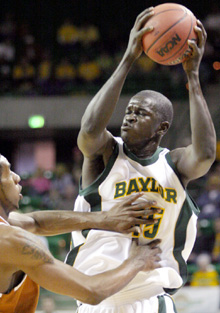 Joseph Treutlein
@DraftExpress
Averaging 4.8 points, 4.7 rebounds and 1.6 blocked shots in 19 minutes per game, Mamadou Dienes numbers dont indicate him being one of the more serious NBA prospects in this conference. However, as the saying goes, you cant teach size, and Diene has plenty of it. He is a legitimate seven-footer that enjoys a gigantic wingspan; displaying a frame that could still fill out in the future. However, we are talking about a major project. As of now, Diene is slow, mechanical, and awkward when on the floor and, though he has improved, he still has a long way to go before he enters the NBA Draft conversation.

Raw is an understatement when describing Dienes offensive ability. Possessing poor hands and court awareness, he has trouble getting himself in positions to receive the ball and score. However, it is of note that he runs the pick and roll extremely well compared to the rest of his skill set. He also does a good job establishing position in the post, but just cannot catch the ball consistently. When he receives the ball in the post, his offense is incredibly predictable. He catches it, pump fakes once or twice, then goes up, no matter how many people are around him. Occasionally the ball goes through the net, but he is stripped and blocked just as often. A guy with his size and length should be going straight up and attacking the hoop. That being said, he is generally a below-average finisher and lacks the aggression to take the ball to the hoop strong and dunk. He does, however, do a good job of following his shot and is always in the mix for offensive rebounds, even if he doesnt get them.

However, his jump-shot is an area of interest. When left open, Diene has shown the ability to make shots from anywhere from 5 feet to 17 feet away from the basket. As of now, he is shooting midrange jump-shots flatfooted and usually banking them off the backboard. This versatility to step out and hit shots is interesting because of the opportunities it could create for him elsewhere on the floor if he can hit them consistently. He has bad form, launching the ball with an over exaggerated arc at this point. However, he knows how to use the backboard surprisingly well. Diene has shown the potential to hit a baby hook or jump hook shot from the baseline as well, but his combination of bad touch and general inexperience hinders him in this department. Practice is the key for Diene, because once he gets comfortable with his shooting, hell get more opportunities underneath the basket, where he should be getting more production.

On defense, Diene is not nearly as good as his physical attributes would suggest. He only averaged 1.6 blocked shots per game last season, and after watching tape, it is clear why. He has very little concept of timing on the defensive end and would rather stay in the post than actively challenge shots. This is a shame because a guy with his length is an intimidator at the collegiate level the moment he steps on the floor, let alone when he is contesting a shot. And while he tries to block everything in sight, hes not really quick enough to succeed. That being said, opposing teams exploit the fact that he is so post-bound. Missouri scored on him five times in a row by just having their big men shoot mid-range jump-shots in the high post. Diene didnt recognize what was going on even after the fifth time, as every play looked exactly the same. He frequently gets backed down in the post by smaller players too, and is often caught biting for pump fakes. He rebounds well if he gets position, but this doesnt happen very often, and is not particularly strong in traffic because of this. The one thing that Diene really does well on defense is to disrupt passing lanes. He uses his long arms to harass post defenders and steal the ball. Regardless of actual ability, however, it is an understatement to say that the sight of the 7 foot, 250 pound Diene is not a deterrent to slashing perimeter players. Therefore, at the very least, Diene is a presence on defense.

Diene is still learning the nuances of the game, and therefore, the intangibles he possesses are fairly limited. For example, he sometimes looks disinterested when the play does not involve him in anyway and is not very aggressive with the ball in his hands. He also shows the tendency to hack and get pointless fouls. Diene has some decent tools to work with and shows some surprising versatility for a player as limited as he is. A lot of work is going to have to take place in order to turn Diene into a solid basketball player, and these days in the NBA, scouts are going to want to see it happen on both sides of the ball.
Read full article

Jonathan Watters
@DraftExpress
Although Baylors 05-06 season had a black cloud over it in light of Patrick Dennehys tragic death and a coachs attempted cover up, there were three bright spots in players Aaron Bruce, Curtis Jerrells, and seven foot Mamadou Diene.

The redshirt sophomore showed flashes of dominance on the defensive end last season, as he averaged 5.8 rebounds and 2.2 blocks in only 23.2 minutes per game. He uses his reported 7-foot-6 wingspan to all of its capabilities, altering far more shots than the numbers reflect. As far as rebounding is concerned, Diene boxes out well and crashes the offensive glass extremely hard. It is certainly not out of the question to see this Baylor big man post averages of 10 rebounds and 3 plus blocks per game with the extended playing time he is expected to receive this season.

Offensively, the massive big man is still extremely raw, possessing zero go-to post moves as of last season. He virtually scored all of his points off of lay-ups and tip-ins, and displayed incredibly poor footwork when he actually tried to score out of the post. Mamadou did however show decent hands, leading one to wonder that with any development in terms of footwork, why it would not be possible for him to become a 10 point per game scorer by the time it is all said and done this season.

Physically, Diene is about all you could ask for out of a 7-footer. He has a mammoth wingspan, a great frame, and surprising mobility for a player of his size. The Senegalese post runs the floor quite well, and plays incredibly hard on both ends of the floor, although his offensive production may not show it. Baylor coaches have raved about Mamadous work ethic, so it will be interesting to see how he is able to develop over the rest of his tenure at Baylor.

As far as the NBA is concerned, Mamadou already has the physical attributes necessary to become an NBA center. His shot blocking and rebounding have already put him as a name to remember for scouts, but with the huge IF he ever develops an offensive game. It is a huge IF, so Draft fans and scouts alike will have to sit back and watch if Diene is ever able to become a formidable offensive presence. If this ever happens, we will surely be hearing this seven footers name called in the NBA Draft by the time he graduates college.
Read full article