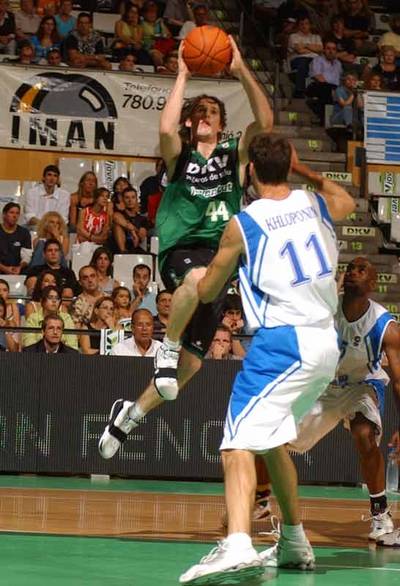 Scouting the NBA Free Agents at the 2008 Copa del Rey

Jonathan Givony
@DraftExpress
This season has been somewhat of a coming out party for the former draft prospect and Brazilian national team point guard, stuck as a backup for the past few seasons in Joventut, but now in the midst of a renaissance as the catalyst of the most surprising team in the ACB. Huertas had one of the best individual performances over the entire weekend in a win against Barcelona, and then had a much weaker showing in the semifinals against Tau. Its very clear that Bilbao only goes as far as hell lead them, as everything starts and ends with him offensively, which makes their terrific record this season (currently tied for second place in the league) that much more impressive.

Huertas is a small and skinny point guard, with solid quickness, excellent ball-handling skills, and the ability to change speeds on the fly and get to the basket at a very nice rate. Once known as a fairly wild player (like many Brazilian guards), Huertas has matured over the last few years, and now looks much more patient and under control, making excellent decisions on the pick and roll in particular, getting everyone on his team involved unselfishly (in a variety of ways), pushing the ball up the floor well, showing excellent court vision, and also being able to score the ball himself when things broke down offensively. He has a nice mid-range game, and is a decent shooter from 3-point range, nothing spectacular (his release is not very quick), but enough to keep defenses honest and prevent them from going underneath screens on the pick and roll.

Defensively, Huertas struggles to a certain extent, as he lacks great physical tools in this department, with his average size, skinny frame, and extremely short armswhich hurts his upside as far as the NBA is concerned. His lateral quickness is not the best either, and he seems to struggle in particular defending the pick and roll, as he lacks the strength to fight through screens at times.

Huertas is likely in the right spot in the ACB as far as his talent is concerned. If he continues to improve at the same rate next season, he might be able to reach an even higher level (ie: the NBA) down the road, but that might not be very realistic. Joventut apparently still owns his rights, and it wouldnt surprise us to see him back there next season.
Read full article

Strengths
Marcelihno is a flashy point guard, one of those guys that people either fall in love with or absolutely hate. He enjoys good quickness and excellent handles with both hands. Despite being right handed, you might be led to believe that he's actually left handed while watching him dribble the ball. He's really fast with the ball in his hands.

Huertas' quickness and handles, paired with a nice first step, give him the ability to beat most of his defenders, using this gift to create a big part of his game off the dribble. When he penetrates, he can look for the assists showing a quick mind to make decisions, he can finish himself with a layup, or he can deliver a flashy mid-to-short-range shot in motion, many times using the glass, with nice accuracy. This kind of shot can be very useful at the next level when facing bigger and more athletic players who usually doesn't allow classic layups in the half court. He's very skilled performing reverses or changing gears. It's a kind of drive to the basket, wild and unpredictable, a little bit in the mold of Steve Nash (of course, on a much lower key), that can open many opportunities for him and his teammates.

Even if that's his primary way to distribute the ball, he can pass the rock in static situations, trying to help the ball movement. He's a player with pretty nice court vision and good passing skills. He likes to play in transition, and actually loves the up-tempo game.

Not a bad shooter at all, Marcelihno shows good range, even out to the NBA three-point land. He is capable of hitting even some rather wild shots, although with limited range. His mechanics aren't the most orthodox, but they are pretty reliable.

On defense, Huertas uses his quickness and shows a good attitude and intensity. His lateral defensive movement is good enough to defend his position. In general, he's a very active player who saves little effort.

Weaknesses
To play under control, that's the first issue Huertas needs to address. He usually displays a level of activity that leads him to commit too many mistakes. He sometimes overhandles the ball, obsessing himself with driving to the basket, and trying to finish in dead-end situations that force him to shot in bad positions or deliver high risk passes. Way too many times he doesn't know when to speed-up the game or when to stop and play more static, choosing the first option too often and numerous times with bad results. He's still not a good decision maker, being the type of player that can drive his coach crazy.

He needs to improve some characteristics of his shooting. He could use greatly a bit of extra quickness releasing his jumper, and especially, the ability to shot off-the-dribble with some accuracy from long range. This is rather obvious from three-point land, where he rarely has the chance to pull the trigger after already having put the ball on the floor.

While he's improved on defense, there's still work to do. He's too physically weak to fight with stronger point guards that outmuscle him in different situations, particularly if they post him up, while he suffers as well fighting through screens.

Marcelinho's basketball IQ remains a question mark. Will he be able to overcome the poor decision making? It sometimes seems like he's only about one step away from becoming a great point guard. But it also looks like that step is a huge one from him to take.

Competition
Marcelo Huertas grew with the Paulistano's youth teams in Sao Paulo, leaving only to play his senior year of high school in Texas in the 2000/01 season and to Pinheiros for the 2002/03 campaign, when he averaged 16.1 points, 2.8 rebounds, 3.5 assists and 2.2 steals. That year he was named Rookie of the Year in the rather weak Brazilian League. Back in Paulistano, he improved his averages to 17.4 points, 3.6 rebounds and 6 assists for the 2003/04 season.

Looking for better competition, he crossed the Atlantic for the 2004/05 season. In the Spanish ACB League, playing for Joventut Badalona (a team that got a spot in the playoffs) he has averaged 7.1 points, 1.4 rebounds, 2.2 assists but also 2.1 turnovers in about 17 minutes per game. In the ULEB Cup, his stats were pretty similar: 6.5 points, 2.6 assists and 2.1 turnovers in 16.5 minutes per game.

Unlike most international prospects, Huertas has almost no international experience to speak of. He did not participate in either the FIBA Americas tournament (Olympic Qualifiers) or the Pan American games in the Dominican Republic this summer.

Outlook
Automatically eligible as a 1983 prospect, Marcelinho isn't anything more than a second round bubble guy right now without a great showing in Chicago or in private workouts. His weak season and the depth of the draft have complicated his chances of being called by any team on draft day. If a team is lacking roster spots for next year and is looking to keep a player overseas for another year or two, Marcelinho could be a solid candidate.

Comments
He's in the same boat with a bunch of 1983 international point guards that might have a shot at the second round, like Bojan Popovic, Ender Arslan or Nikos Zissis. Marcelinho is probably the most intriguing out of them, given his flair and quickness on court, but not necessarily the best. On the contrary, we could say that he's currently the weakest among that crop as of right now, and it would be hard to argue about it.

This season in Joventut Badalona he has played an off-the-bench role. He has enjoyed consistent minutes, but in small doses. I think his game might improve significantly if he's given the starting role for good. He would probably gain a lot of confidence while calming down his game a little, not having the urgency that is provoked by coming off the bench to fight for minutes with the starting PG. According to sources he has indeed already been offered a multiyear contract to stay in Badalona for as long as he pleases.

Facts
He speaks fluent English after having played his senior high school year in Texas.

He owns an Italian passport so if the NBA doesn't work out he certainly has a spot waiting for him in Europe.
Read full article

An American Perspective on Europe...the Guards

Jonathan Givony
@DraftExpress
Another player who I already scouted last year in Chicago. It's always nice to watch a player like this after almost an entire year of not seeing him at all, to see how he's coming along. Huertas looks more mature physically than I remembered him, and also a bit more confident in the minutes that he was playing really well (like the game I have against Tau Vitoria).

He is a tall, speedy PG who plays the game in his own unique and energetic fashion, with a lot of flair, but in the unconventional way that can drive a lot of coaches crazy.

He loves to put the ball on the floor and get into the lane, showing good ability on the drive and dish, or pulling up for a sweet mid-range jumper. In terms of shooting, he can hit the three, but needs to get more consistent in terms of his release and expanding his range out to the NBA three point line. Defensively, adding strength and improving his footwork should be big priorities for him. He puts in a lot of effort, but the results aren't always there. When it comes to running a team, he shows some sparks of potential, but it will take him another year or two of running a team in Europe full time before his decision making ability in a half-court offense will be where an NBA team wants it. Experience is what he's lacking the most right now.

In terms of upside, he is an interesting prospect in this draft because he clearly has a lot of tools to build on and has the potential to improve his correctable flaws by playing in Europe for another year or two. I think someone should definitely take a flyer on him in the 2nd round and stash him overseas while monitoring his progress.

The problem is that he is so wildly inconsistent that it really depends on what night you catch him on. He can look like a first round prospect one game, and then look so horrible in the next two that you wonder why he is even being considered a prospect.
Read full article