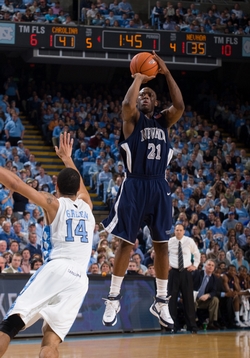 Joey Whelan
@DraftExpress
Despite putting up very impressive numbers each of the last two seasons, Marcelus Kemp was always stuck in the shadow of his better known teammate Nick Fazekas. With Fazekas in his first year at the professional level now though, Kemp has emerged not only as the leader of the Wolfpack, but as one of the top players in the WAC.

Physically, Kemp has strengths and weaknesses. At 65, the senior has average size for the two-guard spot in the NBA, and does not show to versatility to suggest that he could play any other position. Kemp is built very solidly though, packing 218 pounds onto his frame. This helps him a lot when it comes to fighting through screens, rebounding inside and dealing with contact from defenders. Kemp is an average overall athlete; he has decent quickness, and shows great strength and body control. He is also lacking somewhat is his abilities as a leaper, not being particularly explosive finishing around the basket.

The majority of Kemps possessions on offense come in isolation situations. This isnt surprising since he is the teams top scoring weapon and since he is responsible for more than a quarter of the Wolfpacks shot attempts per game. Kemp is at his most effective here when he puts the ball on the floor and slashes to the basket. He knows how to get into the paint and does a fairly good job of breaking down defenders thanks to his good basketball instincts. His decent quickness is offset however by his ball-handling skills which need to improve. Kemp is quick enough where he could get into the lane at the next level, but his somewhat average dribbling ability often leaves him a half step too slow.

Once in the lane, things get interesting for Kemp. Despite his great body control and his ability to get himself decent looks at the rim, he struggles to finish inside in traffic. Again, having a stronger vertical leap would allow him to elevate over defenders and finish with great ease, but often in contorting himself around opponents he loses the touch on his shot. Once positive note for Kemp, though, is his tenacity on the offensive glass. He averages nearly 1.5 offensive rebounds per game, the majority of which come from his own misses. He uses his strong frame well to gain position, and often simply just outworks other players to get the ball.

Kemps biggest strength however is his midrange game. His ability to pull up off the dribble and knock shots down consistently is very impressive for a player at the college level. He likes the step back and does a good job of creating space for himself to shoot on the move. Kemp has nice shooting form, but has a tendency to kick out his feet and fade away on a lot of shot attempts. He is a solid perimeter shooter as well, connecting on nearly 39% of his attempts this season. From beyond the arc, he is primarily a catch and shoot player, but one that can hurt opposing teams if he is left open.

Defensively, it has been hard to gauge Kemp this season due to Nevada playing a tremendous amount of zone. His lateral quickness is a concern and it seems like he would have some struggles guarding his position in the NBA. His 69 wingspan helps him challenge opponents shots better than he would be able to normally due to his average athleticism, though. Kemp seems to get lost sometimes in the zone. He plays down low in the 2-3 setup, but often appears to get confused as to who he should match up with when the ball is on his side of the floor. In the few times that we have seen Kemp in man-to-man situations, he has struggled at times to stay in front of his man.

All in all, it is probably going to be somewhat of an uphill battle for Kemp to be drafted into the NBA. He is a rarity in that he is a sixth year senior, having redshirted for one season and taken a medical redshirt after tearing his ACL several years ago. He is a big time scorer at the collegiate level, but appears to lack the physical tools necessary to make him a standout player at the next level. His strength and aggressiveness will definitely win him some points with scouts, as will his solid shooting ability. Big showings at events like Portsmouth and Orlando will be a necessity in order to wind up in an NBA uniform next year, though.
Read full article

Joseph Treutlein
@DraftExpress
While the sting of losing to 12th ranked Montana likely won't wear off for Wolf Pack fans anytime soon, they can at least console in the fact that they have a legit star in the making to look forward to next year. Nick Fazekas appears to be out the door heading for the NBA draft this summer, but the program looks to be in good shape with Marcelus Kemp ready to break out in his junior year.

Essentially a 4th year college sophomore after red-shirting one season and sitting another year with a torn ACL, Kemp was the only player that really showed up for all 40 minutes in Nevada's disappointing exit against Montana. He attacked the Grizzlies defense relentlessly all game long, and appeared extremely confident in his abilities as a player.

Kemp used his athleticism on both ends of the floor, playing tough pressure defense on whoever he was asked to guard, taking the ball strong to the rim and pulling up for an array of mid-range jump shots. His ball-handling needs some work still, but he's clearly headed in the right direction and has a nice perimeter shot to compliment his slashing ability as well.

As a 22-year old sophomore, Kemp has his work cut out for him to make some serious strides in his game over the summer and try to show that he's a legit draft prospect next year, but from what we saw today, he has some very nice tools to build on.
Read full article